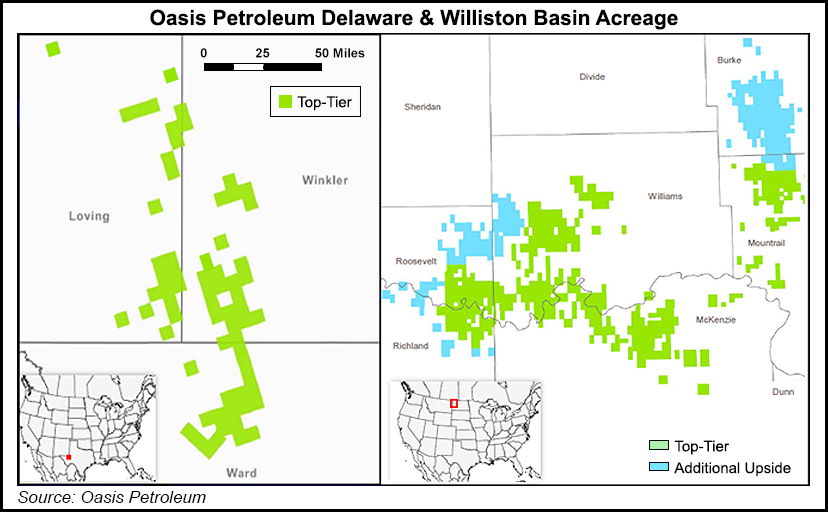 The Houston-based independent is selling its Permian acreage to an undisclosed buyer for total gross consideration of up to $481 million.

Oasis will receive $406 million at closing and up to three $25 million annual contingent payments in 2023, 2024 and 2025 if West Texas Intermediate oil prices average over $60/bbl in each respective calendar year. CFO Michael Lou said the deal is expected to close in July.

The divested assets comprise about 24,000 net acres that produced 7,200 boe/d during the first quarter.

Oasis earlier this month expanded its Williston position, acquiring assets from Diamondback Energy Inc. in a cash deal valued at about $745 million. The Williston assets consist of about 95,000 net acres, and produced about 27,000 boe/d of oil and gas during the first quarter.

During a conference call Friday to discuss the latest transaction, CEO Danny Brown said, “we continue to believe that the divested Permian position is a great asset. But opportunities for Oasis to build meaningful scale around the position have become quite limited as a lot of consolidation has happened around us since the asset was purchased in 2018.”

Citing the importance of size and scale in order to generate attractive returns, Brown said “unfortunately we just did not see a reasonable pathway to build the scale and vision” the company had when it entered the Permian.

“The decision to exit the Permian Basin while building scale in the Williston Basin is fundamentally based on aligning company resources with our core competitive strengths and strategic focus of building a sustainable enterprise which generates significant free cash flow for the benefit of the company and shareholders,” Brown said.

He added that the divestiture “allows us to bring substantial value forward from an asset that was difficult to scale, strengthens our balance sheet from already peer-leading levels, and allows us to focus our attention on driving significant value from our world-class Williston acreage position, where we see great upside opportunity and long-term running room.

“The combined Williston and Permian transactions are highly accretive, position Oasis to take advantage of expanded scale, result in very low leverage, and demonstrate our commitment to shareholders.”

OMP “expects to benefit from incremental activity based on plans from the new operator,” Oasis said.

Oasis now expects to produce 63,500-66,500 boe/d in 2021, with oil accounting for 41,500-43,500 b/d of the total. Exploration and production capital expenditures in 2021 are expected to be $205-220 million, with incremental activity previously planned for the Permian now expected to shift to the Williston in the second half of the year.

Lou said based on current strip pricing, Oasis expects to bring its net debt to zero by mid-2022.