Oasis Petroleum Inc. and Oasis Midstream Partners LP (OMP) on Monday announced a simplification agreement through which OMP is acquiring the producer’s remaining interests in two development companies or “DevCos” that own midstream infrastructure assets in the Bakken Shale and Permian Basin. 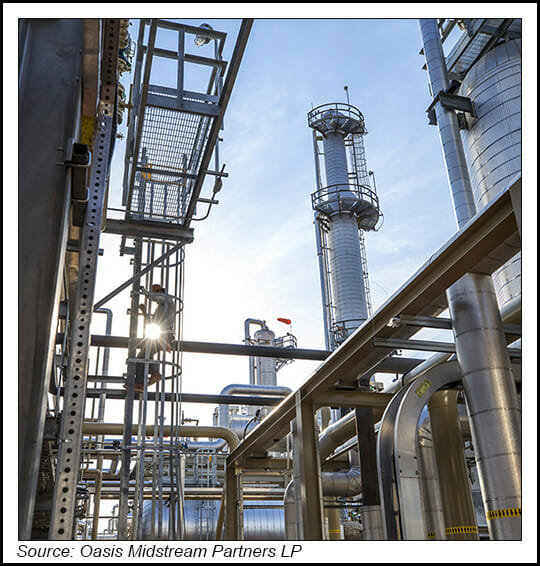 OMP is a master limited partnership (MLP) formed by Oasis to own, develop, operate and acquire midstream assets in the Lower 48. Both companies operate primarily in the Bakken and Permian. Under the “contribution and simplification” agreement, OMP would acquire the remaining interests in Bobcat DevCo LLC and Beartooth DevCo LLC.

As explained in a 2020 note by RBN Energy LLC analyst Housley Carr, Oasis and OMP use the DevCo approach “to keep track of the share each entity holds in each of its gathering systems and other midstream assets.”

In addition to divesting its interests in the DevCos to OMP, Oasis plans to eliminate its incentive distribution rights under the MLP in exchange for $229 million in cash and 14.8 million common units valued at about $510 million, the firms said.

In addition to the simplification, Oasis has authorized $100 million in share buybacks on top of a recently announced dividend of $1.50/share per year.

“Through this simplification, we were able to enhance the financial profiles of both Oasis and OMP, while strengthening our competitive position,” said CEO Douglas E. Brooks. “Oasis’ share-repurchase program announced today further demonstrates the strength of our assets and our commitment to find ways to return cash and value to our shareholders.”

The MLP “remains a valuable investment for Oasis and we will continue evaluating additional options for further value enhancement.”

OMP, meanwhile, also said it plans to offer $450 million in senior unsecured notes due 2029 in a private placement to eligible purchasers. Proceeds would be used to repay about $208 million of outstanding debt.