Oasis Petroleum Inc., a newcomer to the Permian Basin, plans to dedicate acreage in the Delaware sub-basin to its midstream subsidiary for crude oil and produced water infrastructure development, but is holding firm on drilling and completion activity despite improving commodity prices. 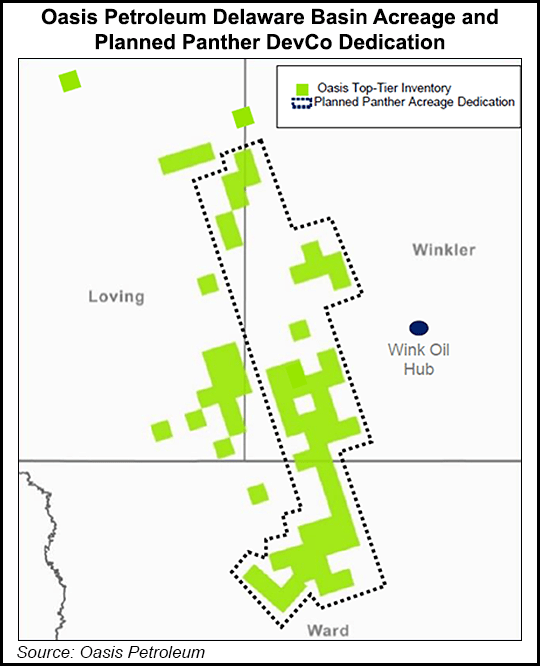 The Houston-based independent said Oasis Midstream Partners LP (OMP) expects to spend an additional $53-57 million in 2019 on building out additional infrastructure, which includes purchases from Oasis for existing midstream assets in the Delaware.

The arrangements, similar to existing terms between Oasis and OMP in the Williston Basin, call for an OMP subsidiary, OMP Operating LLC, to form a new development company called Panther DevCo LLC focused on the Delaware. Final agreements have not been executed.

“This is a strong win for Oasis as we’ll benefit from the surety of service, reliability and cost advantages provided by OMP,” CEO Tommy Nusz said during an earnings call Wednesday. CFO Michael Lou added that both Oasis and OMP “have been working hard to create a symbiotic and synergistic relationship that supports the development of the Delaware.”

“Oasis remains focused on executing its prudent development program in 2019 and generating free cash flow,” Nusz said. “We are on track with our budget and have no plans at this point to accelerate activity. Commodity prices have strengthened materially since earlier this year and we continue to take advantage of higher priced windows to roll in additional 2019 and 2020 hedges.”

During the first quarter, Oasis completed and placed into production 9.2 net operated wells, including 7.1 in the Williston and 2.0 in the Delaware. The company kicked off the year with four rigs in the Williston, but dropped one rig in February and plans to drop another later this month. Oasis is currently running two rigs in the Delaware, where it expects to complete 9-11 wells this year.

Lou said the company expects to generate close to $200 million in free cash flow in 2019 with a West Texas Intermediate (WTI) price of $50/bbl and a Henry Hub price of $3/MMBtu. Lou said that was a vast improvement from the company’s February presentation, when it expected to generate $150 million. Oasis had free cash flow of $32 million in 1Q2019.

“This increase is due to strong production, lower lease operating expenses, type differentials, opportunistic hedging and overall efficiency of our operations,” Lou said.

Oasis projects that OMP will have negative free cash flow of $105-137 million in 2019. The company attributed the negative free cash flow to the buildout in the Delaware and funding for Oasis’s interest in Bobcat DevCo LLC. Bobcat’s assets, which include gathering infrastructure for oil, natural gas and produced water, are primarily in Oasis’s Wild Basin operating area.