The state of New York is poised to ban high-volume hydraulic fracturing (HVHF) early next year, after the state’s health commissioner completed a health impact analysis and delivered withering comments about the practice at a year-end cabinet meeting with Gov. Andrew Cuomo on Wednesday. 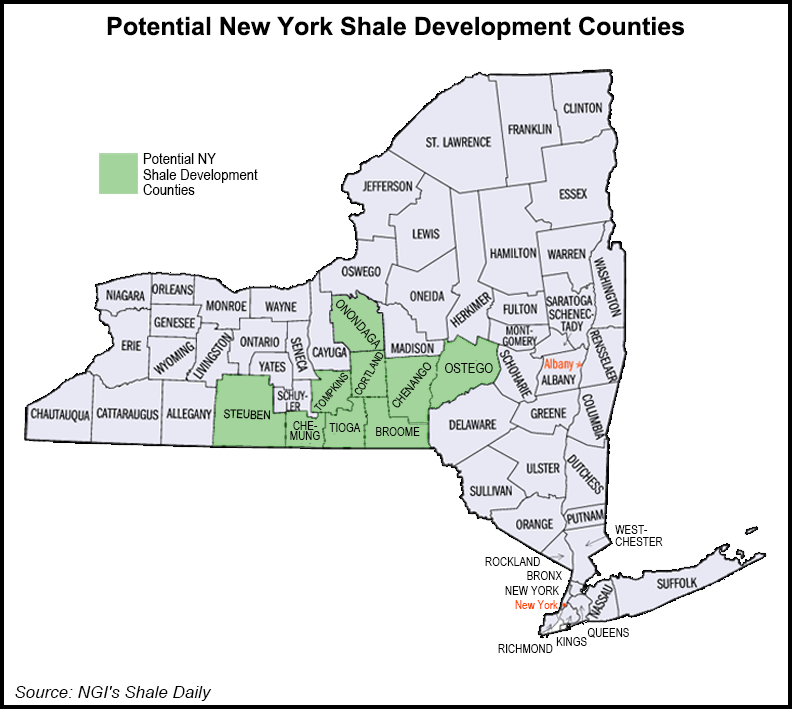 Department of Environmental Conservation (DEC) Commissioner Joseph Martens said he would direct his staff to publish a final supplemental generic environmental impact statement (SGEIS) on HVHF early next year. Ten days after the SGEIS is published, he plans to “issue a legally binding finding statement prohibiting HVHF” in New York. There would be no public comment period.

Cuomo said he accepted the findings from Martens and Howard Zucker, the acting commissioner of the Department of Health (DOH), that HVHF is too dangerous to be performed anywhere in the state. That support suggests his administration will not back a plan to allow HVHF in five counties in the Southern Tier, which was initially proposed in 2012 (see Shale Daily, June 18, 2012). The region is prospective to the Marcellus and Utica shales.

“I don’t think I even have a role here,” Cuomo said about the decision. Later, he added “there’s going to be a ton of lawsuits, I’m sure, from every which way.”

In his comments, Zucker blasted HVHF for nearly 20 minutes. He said he and his colleagues traveled to most of the states where HVHF is permitted, and was told by many of his counterparts that they weren’t involved in the process to ultimately allow the practice.

“Existing studies and data illustrate there are many negative potential health effects from HVHF,” Zucker said. “More importantly, there are many red flags because scientific issues have not yet been comprehensively studied through rigorous, scientific research at this time.

“Would I live in a community with HVHF, based on the facts I have now? Would I let my child play in a school field nearby, or my family drink the water from the tap, or grow their vegetables in the soil? After looking at a plethora of reports…my answer is no.

“We cannot afford to make a mistake. The potential risks are too great, in fact they are not even fully known. Relying upon the limited data that is presently available to answer the public health risks would be negligent on my part.”

Martens said given the combination of regulatory uncertainty in New York, fallout from last summer’s decision in the Dryden case to allow local bans on fracking (see Shale Daily, June 30), and low prices for natural gas, it was unlikely the oil and gas industry would be interested in the Empire State anyway. He added they might never be.

“We can conclude [there] would be significantly less [economic development] than originally forecast,” Martens said. “Even the industry has questioned whether or not it would be economical, given all of the resources taken out of play.

“The price of gas is $4/Mcf, which is at historic lows, so it is very unlikely in the near future it would go forward anyway, just because of the economic conditions that exist now. Long term, it is highly questionable whether it would be profitable” in New York.

Martens acknowledged that his position on HVHF, and apparently that of the DOH, has evolved. A draft assessment by the DOH in 2012 concluded the practice could be performed safely with appropriate regulation (see Shale Daily, Jan. 7, 2013).

“I said way back at the beginning that with all the proper mitigations in place that I thought it could be done safely,” Martens said. “This is where it’s beneficial to take a long-term view and watch what’s been going on around the country, and that’s exactly what we’ve done.”

Both Cuomo and Zucker said they wouldn’t question a decision by other states to allow HVHF. “If they think it makes sense for them in their context, in that situation and with their precautions, then that’s up to them,” the Democratic governor said.

Brad Gill, executive director of the Independent Oil and Gas Association of New York (IOGA), said the organization was “shocked” by Wednesday’s announcement.

“I thought we would hear a five-county pilot program being proposed,” Gill told NGI’s Shale Daily on Wednesday. “That’s what I expected to hear…from the governor, honestly.”

Gill said the two companies he is involved with have been busy in Pennsylvania, drilling and exploring. “Some of our member companies have left over the last six years to operate elsewhere…This just seals the deal for us.”

Gill said he was infuriated by the comments Martens made about how unattractive the Empire State would be for the oil and gas industry, considering the regulatory uncertainty.

“It’s a self-fulfilling prophecy; the State of New York is the one that took two-thirds of the acreage off the table,” Gill said. “And you also heard [Martens] refer to the cost of regulatory compliance. Well, that’s because the DEC and New York state put burdensome regulations on the industry.

“We don’t like state agencies and regulators dictating our economics. It’s not up to New York state to determine whether or not it’s economic to drill.”

Other supporters of shale gas development in the Empire State also derided the decision.

“This is an ill-advised decision that denies New Yorkers the opportunity to take advantage of the many environmental and economic benefits that natural gas offers,” said Paul Hartman, northeast director for America’s Natural Gas Alliance (ANGA). “This has always been a political, rather than a public health decision.

“Natural gas provides an engine for the economy of New York, which is the nation’s fifth largest natural gas user, and the state is forgoing the advantages its neighbors enjoy from natural gas production. The decision to prohibit hydraulic fracturing is based on data that does not justify the Cuomo administration’s conclusions. Natural gas has been responsibly produced in communities across the country and we are proud of our industry’s safety record.”

Karen Moreau, executive director of the New York State Petroleum Council, a division of the American Petroleum Institute (API), said Cuomo had acted irresponsibly. She hinted that landowners in the state might file a lawsuit, and that if they did, API would assist them.

The “action by Gov. Cuomo shows that New York families, teachers, roads and good-paying jobs have lost out to political gamesmanship,” Moreau said. “This is the wrong direction for New York.

“Robust regulations exist at the federal and state levels nationwide for natural gas development and environmental protection. A politically motivated and equally misinformed ban on a proven technology used for over 60 years — throughout the country to great success — is short-sighted and reckless, particularly when New York depends on safely produced natural gas just over the border in Pennsylvania.”

“We are resolved to continue to fight for these benefits in New York,” Moreau said. “We look forward to continuing to work with the landowners and our labor allies, who are focused on creating jobs. This is a missed opportunity to share in the American energy renaissance, and for New York’s future prosperity.”

Gill said he was unaware of any IOGA company members considering litigation. “If anybody is going to litigate it would be the landowner groups,” he said.

Marcellus Shale Coalition (MSC) President Dave Spigelmyer said Pennsylvania’s drilling success shows “that with strong and common sense regulations, along with continuous technological advancements, shale development is a win-win for the state and our nation’s environment and the economy.

“It’s unfortunate that political ambition prevailed over the fundamental rights and potential opportunity for Southern Tier families, farmers and communities, especially at a time when consumers — including those in New York and across the entire country — are benefiting from lower energy costs as well as broad-based job creation and economic growth tied to responsible shale development.”

Sierra Club executive director Michael Brune had a very different take. “The Sierra Club applauds Gov. Cuomo for recognizing what the science has made consistently clear: fracking is a hazard to human health that endangers communities wherever it is allowed,” Brune said. “By banning fracking, Gov. Cuomo has set himself apart as a national political leader who stands up for people, and not for the interests of the dirty fuel lobby.”

The decision, said Brune, “will shake the foundations of our nation’s flawed energy policy, and we can only expect that it will give strength to activists nationwide who are fighting fracking in dozens of states and hundreds of cities and counties.”

A moratorium on HVHF in New York has been in effect since July 2008, when then-Gov. David Paterson ordered the DEC to perform an SGEIS on HVHF. In September 2012, Martens asked then-DOH Commissioner Nirav Shah to conduct a health impact analysis of HVHF before the DEC completed its SGEIS (see Shale Daily, Sept. 24, 2012). Shah has since resigned for a job in the private sector (see Shale Daily, April 11).