Natural gas forward markets were lower for the Oct. 22-28 period as lackluster demand in key demand regions of the Lower 48 tempered prices, according to NGI’s Forward Look. Losses were mostly pronounced in the Northeast and in the Permian Basin, where pipeline work sparked increased volatility this week. 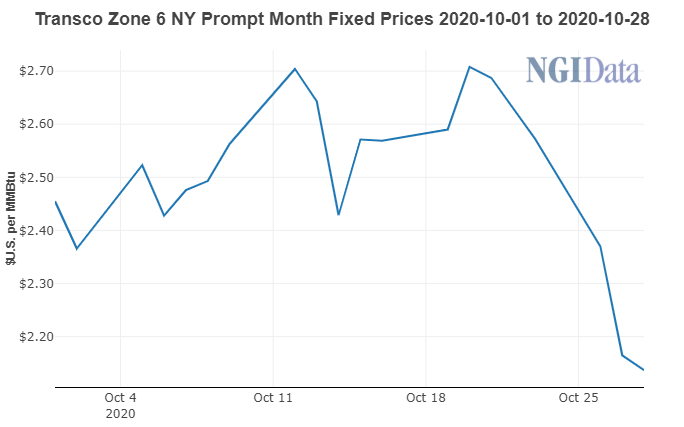 Most of the price action was at the front of the forward curve, where November prices fell an average 15.0 cents, Forward Look data showed. December slipped only 1.0 cent on average, and the full winter strip (November-March) dropped 4.0 cents. Prices for next summer (April-October) averaged flat for the week, while the winter 2021-2022 strip picked up 2.0 cents.

In an interesting break from the norm this week, several U.S. markets broke away from Nymex futures prices. The November Nymex contract expired Wednesday at $2.996, off only a penny from the Oct. 22 settlement of $3.007. Small changes were seen throughout the curve.

“After surging 49.2 cents since Oct. 1, bullish natural gas momentum may be due for a period of near-term consolidation as shut-in production returns, net exports falter and supportive weather moderates in the most likely scenario,” EBW Analytics Group said.

That theory may have some legs, at least in part. On Thursday, the newly prompt December Nymex contract was trading sharply lower early in the session as the latest weather forecasts confirmed a warmer outlook for the middle third of November. Meanwhile, production was expected to start coming back online after Hurricane Zeta. Some 45% of the natural gas produced in the Gulf of Mexico was taken offline ahead of the storm. Oil shut-ins reached more than 66%.

In addition to GOM shut-ins, Genscape estimated output declines this week in Texas, the Midcontinent and the New Mexico portion of the Permian. Gains on Thursday were centered in Texas (up 587 MMcf/d) and in the Permian New Mexico (up 787 MMcf/d), according to Garcia.

A barge remained submerged Thursday in the Calcasieu Ship Channel and was restricting cargo loadings at Cameron. However, the mid-November time frame for removing the obstruction — and Cameron being able to fully resume operations — could send LNG feed gas demand to all-time highs.

The historic hurricane season, with 10 storms having struck the United States, has led to quite a few surprises in the weekly storage inventory data. The latest government figure was no different.

On Thursday, the Energy Information Administration said that U.S. stocks rose by 29 Bcf for the week ending Oct. 23. The reported build shocked the market, who had been expecting a much larger build of as much as 46 Bcf. NGI had projected a 42 Bcf injection.

Bespoke Weather Services said the 29 Bcf was a “notably tighter” number than expected in terms of supply and demand, indicating that the current higher price level is not yet impacting demand. If weather models were to reflect more cold in the forecast, prices could climb rather easily.

The reference period was marked by a major comeback of LNG demand, which had been hampered by Hurricane Delta and its aftermath earlier in October. Feed gas flows had dropped to around 5 Bcf ahead of the storm and remained well off highs after several obstructions, including the barge, were found in waterways near Sabine Pass and Cameron and restricted traffic. But by Oct. 20, deliveries were back above 8 Bcf and continued to climb from there.

The higher export demand was seen factoring into the latest storage surprise, since the South Central region reported a 1 Bcf draw from nonsalt facilities in the region. Salt stocks reported no change in inventories.

The stark reminder of how quickly and intensely balances are tightening quickly erased Thursday’s earlier losses for Nymex futures. The December contract, which had plunged to an intraday low of $3.151, went on to settle at $3.301, up 1.0 cent from Wednesday’s close.

The Northeast posted some of the most significant decreases at the front of the forward curve during the Oct. 22-28 period thanks to the rather mild temperature regime in place for the past week.

Much colder weather appeared to be on the way, with overnight temperatures expected to drop into the 10s to 30s on Friday, followed by another cold shot Monday and Tuesday. After that, current models were pointing to returning warmth for the Northeast through the middle of November. That bearish setup sent prompt-month prices at Transco Zone 6 NY tumbling 49.0 cents during the week to $2.137, Forward Look data showed.

On the pipeline front, Texas Eastern Transmission (aka Tetco) has received permission from the Pipelines and Hazardous Materials Safety Administration to return to service the 30-inch diameter system segment from Holbrook to Uniontown, both in Pennsylvania. Genscape’s Garcia said Tetco had previously completed all geohazard work, and it now has completed the final step of installing a regulator facility at its Holbrook compressor.

Once commissioning is complete, Tetco is expected to take several days to raise pressure on the segment, culminating in returning Uniontown to its full capacity of 4.5 Bcf/d on Monday or Tuesday (Nov. 2-3).

The losses in the Northeast extended upstream in Appalachia. Tennessee Zone 4 Marcellus November prices plunged 34.0 cents from Oct. 22-28 to reach $1.562, and December dropped 9.0 cents to $2.552, according to Forward Look. Winter strip pricing was down 10.0 cents to $2.48, but small increases were seen beginning next summer.

Permian pricing also came under pressure during the past week as pipeline maintenance and freeze-offs impacted supply.

Spot gas prices also were impacted, including a fall below zero on Oct. 23, as maintenance on El Paso Natural Gas (EPNG) essentially bottlenecked up to 300 MMcf/d of Permian production.

The choking of supplies occurred amid an equipment failure at the Plains Compressor Station that feeds EPNG’s North Mainline. The outage restricted nominations by around 303 MMcf/d when compared to the prior 30-day average of 484 MMcf/d, according to Gesncape.

Though the restriction has since been lifted, and Waha cash prices recovered to nearly $3.00 by Wednesday, forward prices remained in the red.

Further declines may be around the corner. Given the quick rebound in Permian production following Zeta, Waha cash plunged more than $1.00 on Thursday, which could spill into the forward markets in the coming days.