With a growing disparity between weather models and strong daily production data, natural gas traders pushed Nymex futures down another nickel on Wednesday. With traders expecting another loose storage stat in the latest government data due out on Thursday, the November contract settled 5.4 cents lower at $2.234/MMBtu. December slipped 5.5 cents to $2.436. 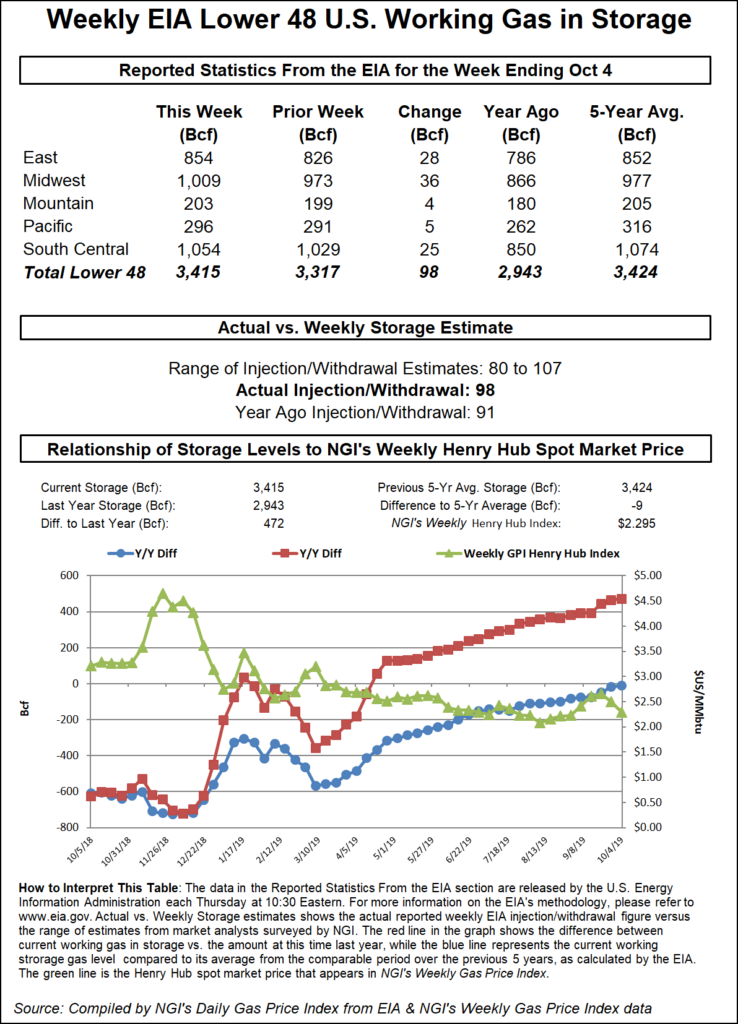 Spot gas prices were mixed again, with mostly small changes seen across the United States. The standouts were on both coasts as several Western markets plunged more than 50 cents on the day, while Appalachian markets notched 20-cent-plus gains, leaving the NGI Spot Gas National Avg. down 7.5 cents to $1.815.

Records and extremes have been a running theme in the natural gas market this year, according to RBN Energy. The prompt month now sits about 45 cents below the $2.68 summer peak reached in mid-September and is yet another reflection of the weakness the market has experienced this storage injection season, which has resulted in daily prompt-month contract settlements averaging the lowest in over 20 years.

The November Nymex contract, which had briefly traded in positive territory early Wednesday, went on to settle just a few ticks above its intraday low as weather models remain at odds. The overnight data reflected an even larger discrepancy as the European models trended a little warmer overall and the American ensembles moved in the colder direction, according to Bespoke Weather Services.

“This is opening up a decent gap between the two models in terms of projected demand,” Bespoke chief meteorologist Brian Lovern said.

The American data is stronger with the six- to 10-day cold shot and doesn’t show as much eastern rewarming as the European data, Bespoke said. It also implies a colder 16- to 20-day than its European counterpart.

Bespoke continues to be more aligned with the European models in its official forecast, “which, variability aside, keeps overall demand rather unimpressive as we head into late October.

“There is definitely some notable cold on the maps, but as of right now, it hangs back in areas that are not as important for natural gas usage,” Lovern said.

Confidence in the long-range forecast remains slightly below average until Bespoke sees how the Pacific typhoon ultimately interacts with the pattern. “This is a source of some of the model chaos.”

NatGasWeather said there was no change to the bigger picture as a swing to stronger demand is still on track late this week through next week as cold shots sweep across the central and northern United States. Weather is expected to then turn “quite bearish” Oct. 19-23 as warm high pressure returns across much of the eastern half of the country.

The midday American Global Forecast System data, however, lost a little demand for early next week and Oct. 20-23, but added demand late next week by stalling cold air over the eastern United States. Nevertheless, NatGasWeather continues to view weather patterns as unsupportive unless there were to be much colder trends in the 11- to 15-day period.

As for other fundamental data, production saw a larger-than-usual revision on Tuesday, moving over 93 Bcf once again, about 0.7 Bcf off the highs, according to Bespoke. Wednesday’s starting point also pointed to around 93 Bcf. Liquefied natural gas intake was off slightly, and power burns were revised a bit lower for Tuesday and “are starting to look weaker even on a weather-adjusted basis when compared to last week.”

In fact, other than strong exports to Mexico, which hit a new high on Tuesday, Bespoke sees “nothing from the balance side of the equation that suggests any notable tightening, which will likely continue to put pressure on prices unless the weather pattern can shift colder in a more durable fashion.”

Meanwhile, the Energy Information Administration’s (EIA) storage inventory report due out on Thursday is expected to show continued looseness — and possibly “extreme looseness” — in the market. Estimates on Wednesday were ranging widely from an 80 Bcf injection to a 107 Bcf injection for the week ended Oct. 4.

A Wall Street Journal poll of 13 participants pointed to a median build of 94 Bcf, and a Bloomberg survey of 14 analysts had a 99 Bcf median. NGI projected a 94 Bcf injection.

The EIA reported a 91 Bcf build for the same week last year, and the five-year average stands at 89 Bcf.

Market projections for end-of-injection-season inventories have climbed to approximately 3.8 Tcf from pre-season expectations of closer to 3.65 Tcf, and the ramifications of this change have aggressively rippled through Nymex and regional markets over the past several weeks, according to Mobius Risk Group. Although 3.8 Tcf is not ”full’ from an inventory perspective, markets from the Midcontinent to the Upper Midwest, over to Appalachia and onward to the East Coast are pricing to handle regional challenges that may very well persist until daily injection activity dips below 10 Bcf/d.

“Such a change in storage activity will of course be weather dependent, and in the meantime $1.00 or greater discounts to Henry Hub may persist in supply basins encompassed by the aforementioned regional framework,” Houston-based Mobius said.

With less than a month of the official injection season left, futures are at some of the lowest levels seen in more than two decades. Daily Henry Hub prompt futures settles from April through September this year averaged $2.41, the lowest seasonal average since the late 1990s, according to CME/NYMEX data from the EIA. So far in October, prompt futures are averaging around $2.30/MMBtu, nearly $1 below this time last year and again the lowest since 1998. The all-time low for the November contract is $1.557, which was set in October 1994.

“At this rate, even the full-year average price for 2019 could end up posting at the lowest on this side of Y2K, especially if there’s a mild start to winter,” RBN analyst Sheetal Nasta said.

The near-term weather outlook and supply/demand fundamentals indicate the year/year surplus will exceed 500 Bcf by late October, and the surplus versus the five-year average will flip to a nearly 50 Bcf surplus by then, according to Nasta.

The increasingly bearish storage picture has been the result of an aggressive storage injection season in which the market injected at or near the 10-year-high pace multiple times, and generally maintained a pace well above the five-year average. In fact, there have been no fewer than nine triple-digit (100 Bcf or greater) injections reported by the EIA since April, compared with just one each in the past two years and zero in 2016.

“The only other time this decade that there were that many triple-digit injections during the April-October period was in 2014,” Nasta said.

The Western United States saw some of the sharpest declines in cash markets across the United States on Wednesday as demand was set to ease with a return to more normal temperatures.

After trading near $5 on Tuesday, Northwest Sumas tumbled nearly 90 cents to average $4.045 for Thursday’s gas day.

Malin was down 56.5 cents to $2.450, while prices in the southern part of California were down at least a quarter.

But at PG&E Citygate, next-day gas fell only 4.5 cents day/day to average $3.250 despite Pacific Gas & Electric Co.’s decision to preemptively shut off power to customers due to wildfire risk posed by severe winds in the region.

PG&E on Wednesday began implementing its three-phase Public Safety Power Shutoff plan, cutting off power to around 513,000 customers across Central and Northern California early Wednesday. The second phase was to follow Wednesday afternoon, impacting 234,000 customers. A third phase would impact around 42,000 customers in the southernmost portions of its service area.

The small losses in the cash market were likely due to a planned maintenance event on the PG&E system set to begin Thursday that will limit its import capacity along the Redwood Path by as much as 0.5 Bcf/d through the rest of October.

“Redwood path volumes are the main source of supply for PG&E’s system-wide demand during the shoulder season, before withdrawal season fully begins in November,” Genscape Inc. natural gas analyst Joseph Bernardi said. “However, with this maintenance in place and with colder-than-normal weather expected for much of the northwestern United States over the next several weeks, PG&E may begin drawing on storage earlier than in a typical year.”

In Texas, spot gas prices remained on the defensive amid the shift to fall-like temperatures and softer demand. Katy slipped 1.0 cents to $2.295, and El Paso Permian fell 1.5 cents to average 93.5 cents.

Most market hubs in the Midcontinent and Midwest swung a few cents either direction, as did pricing hubs in Louisiana and the Southeast.

On the pipeline front, Gulf South Pipeline from Wednesday to Thursday will conduct maintenance at the Harrisville Compressor Station in Simpson County, MS. During this time, Gulf South is estimating impacts of up to 243 MMcf/d to all services at the Expansion Area 19 Scheduling Group except for primary firm.

“While assessing direct impacts to flows on Gulf South is challenging, maintenance events of this size have historically led to a decline in system receipts similar in scope to the stated impacts. Overall, this should not drastically affect the Gulf South system as it is very well supplied and other routes for gas are plentiful,” Genscape analyst Dominic Eggerman said.

Over in Appalachia, next-day gas at Dominion South jumped 27.5 cents to $1.395, which was similar to other increases in the region.