The perfect storm of factors that led to Monday’s dramatic sell-off along the Nymex natural gas futures curve reversed course on Tuesday, prompting a modest rebound in prices. However, the May contract quickly sold off after failing to overcome strong resistance, settling the day 5.5 cents lower at $2.456. June slipped 4.6 cents to land at $2.536. 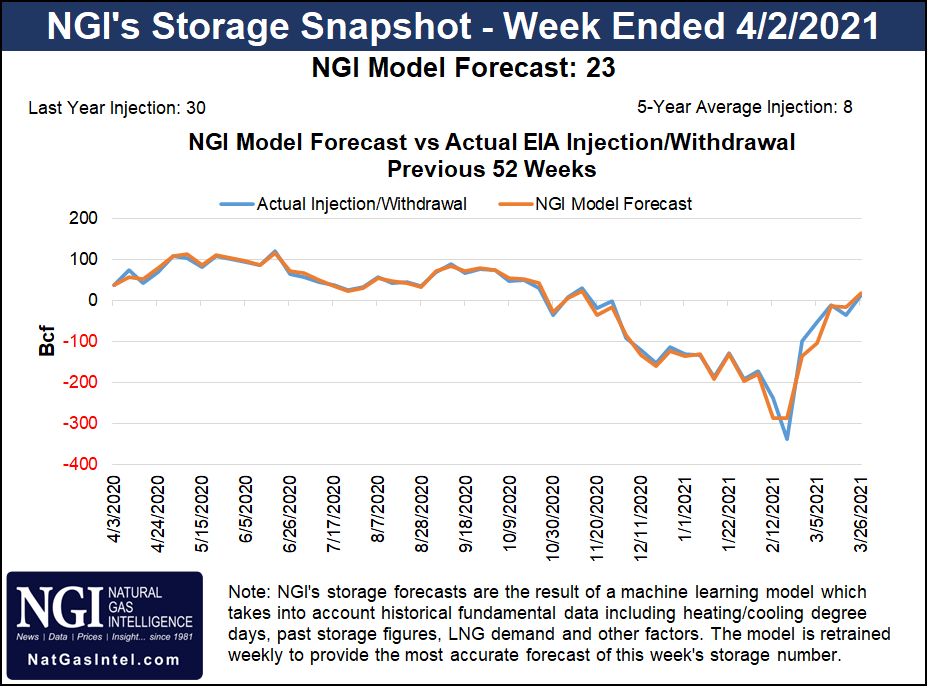 Though early in the low-demand spring season, Tuesday’s cooler revision to the latest weather forecast was enough to turn prices around early in the session. The May Nymex contract opened the day unchanged to Monday’s close at $2.511, and quickly bounced to the $2.568 intraday high.

However, the prompt month failed to garner any additional momentum. With the most recent weather models shedding some demand from the 15-day outlook, prices quickly fell into the red and never turned back.

NatGasWeather said the initial demand gains seen for April 13-20 were because of colder weather systems sweeping across the northern, central and eastern United States. These systems were forecast to drop overnight lows into the 20s to lower 40s in those areas.

“It’s not a strong demand pattern but closer to normal, if not slightly stronger than normal, for a few days,” NatGasWeather said.

However, the next seven to eight days remain “emphatically bearish with exceptionally light demand,” according to the forecaster, as most of the country is forecast to see “near-perfect” highs of 60s to 80s.

If the cooler trends in the long-range outlook hold, though, this may lead to a smaller-than-normal build after the next three come in larger than normal, according to NatGasWeather.

Early estimates for this week’s Energy Information Administration (EIA) storage report are pointing to an injection near 20 Bcf. A preliminary survey by Bloomberg showed injection estimates ranging from 19 Bcf to 23 Bcf, with a median build of 21 Bcf. NGI’s model pegged the build at 23 Bcf.

But other price-moving news in the natural gas sphere is sparse, according to Mobius Risk Group.

The firm pointed out that week/week Mexican pipeline exports saw an increase of just 0.1 Bcf/d.

Production did decline on Tuesday, falling about 1 Bcf from Monday’s levels. However, Bespoke Weather Services pointed out the figure was preliminary and could be revised higher later in the day.

Power burns, though still quite weak, have improved a little over the last few days as well, but the firm remained skeptical of the “staying power” of any price rally.

Last year, EBW noted, LNG demand sank from 8.7 Bcf/d in the first half of April to 7.9 Bcf/d in the second half of the month.

Until then, weather fluctuations always retain the ability to reign supreme when it comes to driving natural gas prices, “especially in a market asleep at the wheel,” Mobius said.

Spot natural gas prices rebounded on Tuesday even as a very light demand pattern was set to remain in place for the remainder of the week.

NatGasWeather said slightly cooler exceptions were forecast over the Rockies as a weather system was to bring rain and snow, but hotter conditions were expected over the Southwest deserts into South Texas. Although additional weather systems were on track across the southern and eastern United States late this weekend and early next week, temperatures were forecast to remain “quite mild,” with highs ranging from the 50s to 70s.

Meanwhile, along with moderate spring weather typically comes a wave of pipeline maintenance events, though they generally fail to move the price needle much given the light demand period.

On Tuesday, Rockies Express Pipeline (REX) began planned work that could limit up to 179 MMcf/d of westbound flow in Ohio through April 11. The work being performed at the Hamilton Compressor Station was to limit flows through SEG 360 to 2,248 MMcf/d, which is located near the Indiana/Ohio border.

Next-day gas prices at REX Zone 3 Delivered were unfazed by the outage, climbing 9.0 cents day/day to $2.230. This was in line with other gains in the Midwest.

Smaller increases were seen in the Midcontinent and down into Texas, where pricing hubs rose by 10.0 cents or less at the vast majority of hubs.

Interestingly, Henry Hub spot gas slipped a half-cent to $2.360, moving against most other locations in Louisiana.

Prices in Appalachia were up as much as 15.0 cents day/day, while Northeast points were mixed.

“The limitation for the Sub-Zone will translate to a cut of 145 MMcf/d versus the recent 30-day average, while the Zonal limitation would cut around 70 MMcf/d,” Wood Mackenzie analyst Joseph Bernardi said. “This work will likely see the largest reduction occur at SoCal’s receipt point with PG&E at Wheeler Ridge.”

Forecasts showed extremely mild weather for SoCalGas’ demand territory during this event, reducing the likelihood of any major price response from this work, according to Bernardi.