Natural gas futures took a dramatic fall after the Easter holiday weekend as weather forecasts shifted much warmer for the next couple of weeks. With April on pace to be warmer than normal, the May Nymex gas futures contract plunged 12.8 cents Monday to settle at $2.511/MMBtu. June fell 11.5 cents to $2.582. 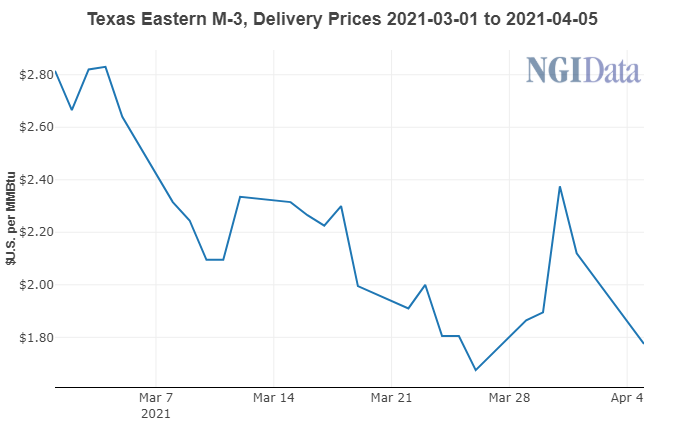 Monday’s steep price drops along the Nymex futures curve were a sharp deviation from last week’s price action. Prices during the short trading week leading up to Easter shifted less than a nickel each day.

Over the three-day weekend, though, the European and American weather models both posted large degree day losses in Weeks 1 and 2 that led to projected demand contracting by 18 Bcf, according to EBW Analytics Group.

The May Nymex futures contract flirted with the $2.50 level, and even sank below it, throughout much of Monday’s session. The prompt month ultimately settled near the low end of the roughly 13.0-cent range.

There is support for a cooler trough to move into the eastern United States toward the middle of the month, according to Bespoke Weather Services. However, this is only expected to bring demand back up toward near-normal levels at this time, keeping April on pace to be yet another warmer-than-normal month “rather easily.

“While there can be some variability at times, our view is that the general warmer-than-normal regime will continue to roll along, which is bearish for a few more weeks, before cooling degree days begin to take over more as we get toward the middle part of May.”

In addition to the warmer changes in the weather data, Bespoke noted that production was revised higher, up to near 90 Bcf. The bigger story, it said, remains the weakness in power burns. “It was a holiday weekend, of course, but these burns, even when adjusting for weather, are still very weak, with lower prices the last few weeks doing very little to bring in more demand, at least so far.”

Given the weak backdrop, natural gas speculator net long positioning fell through March 30 — the sixth straight week of declines, according to EBW. Net long positions have now reached their lowest level since July 2020.

One obstacle for gas futures in recent months has been overwhelmingly bullish expectations, according to the firm. With net longs contracting 45% in six weeks, there could well be more upside potential later in the 2021 injection season, but “sentiment may remain weak in the immediate term.”

Liquefied natural gas (LNG) demand remains elevated, however. NGI data showed feed gas deliveries to U.S. terminals holding near 11.7 Bcf on Monday, not far off where it was a week ago.

EBW and other analysts expect LNG demand to generally continue being strong throughout the coming months, with the exception of spring maintenance and potential weather issues. The biggest driver of the strength is the huge storage deficit in Europe.

Total working gas in storage in the European Union stood April 3 at 1,114.79 TWh, which is around 256 TWh below year-ago levels and about 38 TWh below the five-year average, according to NGI and Gas Infrastructure Europe.

European markets were closed for Easter Monday, but colder weather late last week along with strong natural gas demand being created by the need to replenish depleted storage stocks pushed prices higher. The Dutch Title Transfer Facility finished at $6.620/MMBtu and the UK’s National Balancing Point settled at $6.531 ahead of the Good Friday holiday.

Exports to Mexico also are expected to remain strong in the months ahead. Energy Aspects analysts forecast U.S. exports to Mexico to range between 6.4 and 6.6 Bcf/d during peak summer. This is because they continue to expect demand for gas to rebound as nationwide lockdown measures to prevent the spread of Covid-19 ease. The firm pointed out that lockdown restrictions have now been lifted in Mexico’s largest gas-consuming regions, supporting imports.

“The states of Veracruz and Tamaulipas — which account for 32%, or around 3.3 Bcf/d, of demand on Sistrangas — have lifted all lockdown measures from March 29, with all normal activities allowed and schools reopening,” Energy Aspects said. “Mexican domestic gas production also continues to underperform, further supporting the need for pipeline imports to backfill demand.”

The analysts forecast cross-border flows this summer to average 6.3 Bcf/d (up 0.8 Bcf/d year/year). This is 0.1 Bcf/d lower than their projection last month following consecutive Energy Information Administration (EIA) data that showed flows much lower than had been indicated by daily data.

“We have previously highlighted this and pegged the discrepancy at 0.2-0.3 Bcf/d, but EIA pipeline exports to Mexico undercut daily flow data by as much as 0.5 bcf/d in November-December 2020,” Energy Aspects said.

Meanwhile, summer weather should begin heating up, and the need to replenish storage inventories could bode well for the market in the next couple of months.

A preliminary forecast issued by WeatherBell Analytics LLC in March indicated that most of North America is in store for above-normal temperatures this summer. The warmest weather is seen concentrated in the Southwest and Texas.

Meanwhile, the latest EIA data showed that U.S. stocks as of March 26 were at 1,764 Bcf, which is 225 Bcf below year-ago levels and 36 Bcf below the five-year average.

Analysts at The Schork Group pointed out that this winter’s delivery was 2.208 Tcf, which is 7% above the five-year mean, 15% above the seasonally adjusted time series and 26% above last year’s weather/Covid-19 addled pace. They noted that the end-of-season curve is slipping, which “does not happen in bull markets.”

NatGasWeather said there would be locally “cool” areas this week as weather systems impact the Northwest and Northeast. However, with highs forecast to be in the upper 50s to lower 70s over the Midwest/Great Lakes, and in the 70s and 80s over the central and southern United States, “there just won’t be enough coverage of hot or cold conditions to matter.”

A weather system is expected to track into the Plains on Tuesday, then across the Great Lakes Wednesday and Thursday. But, temperatures are forecast to reach the 50s and 60s, “far from cold enough to drive any meaningful demand,” according to NatGasWeather.

“Additional weather systems will follow next weekend into the following week, although they’ve trended milder and will arrive with little subfreezing air,” the forecaster said.

Chicago Citygate cash was down 17.5 cents from last Thursday to average $2.225, while Texas pricing hubs slipped less than 10.0 cents at the majority of points.Western markets were down as much as 21.5 cents at Northwest Sumas, which averaged $2.225 for Tuesday’s gas day.