July natural gas futures snapped a two-day losing streak on Wednesday, jumping 6.4 cents to settle at $2.964 as weather models showed intensifying heat for the end of June and early July. Spot gas prices were mixed amid a break in the heat for several key demand regions, although increasing heat and pipeline constraints in other regions lifted prices substantially there. The NGI National Spot Gas Average rose 4 cents to $2.68. 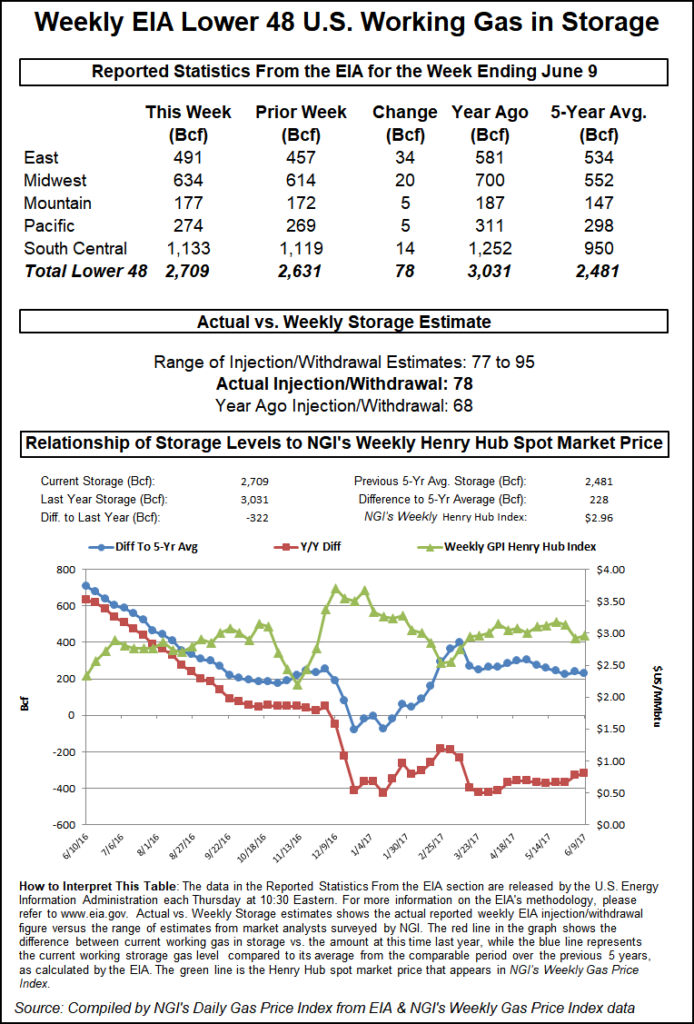 Weather model runs began showing signs of increased heat on Tuesday, which held in overnight runs and again in midday runs. The midday data trended even hotter by seeing a stronger ridge over the eastern United States late next week into the following week for the addition of numerous cooling degree days (CDD), NatGasWeather said.

There will still be a weather system cut across the north-central United States early next week for regionally comfortable conditions, although the rest of the country will be warming into the mid-80s to 100s and the hottest conditions will be over the southern and eastern United States, where high pressure will be strongest, the weather forecaster said.

After Tuesday’s data trended back a touch hotter, “we thought the pattern still looked ominous enough to keep weather sentiment at least somewhat bullish due to hot high pressure expanding to cover most of the country. Prices bouncing today clearly suggests the markets view weather patterns as again hot enough to satisfy. But is it enough to reclaim $3?” NatGasWeather said.

It is certainly possible, the forecaster opined, especially if upcoming runs of weather data trend any hotter over the East for July. The true answer, however, might not come until the release of the Energy Information Administration’s (EIA) weekly storage report, which will be at 10:30 a.m. ET on Thursday.

Estimates are pointing to a build in storage inventories in the mid-80s Bcf range for the week ending June 15. IAF Advisors’ Kyle Cooper projected an implied build of 86 Bcf and a headline build of 82 Bcf, while Bespoke Weather Services estimated an 84 Bcf build. A Bloomberg survey had a range of 76-91 Bcf, with a median of 86 Bcf. A Reuters poll pointed to an 85 Bcf injection, with estimates ranging from 80-91 Bcf and a median build of 85 Bcf.

An on-target storage build compares with a year-ago build of 63 Bcf and a five-year average build of 83 Bcf for the corresponding period. In the week ending June 8, 96 Bcf was added to storage. If correct, this week’s build would boost stockpiles to 1,998 Bcf, the lowest for that week since 2014. That would be about 28% below the level in the same week last year and around 20% below the five-year average.

The next two weeks’ injections are now predicted by traders on the Intercontinental Exchange to be 85 Bcf and 70 Bcf, respectively, which, “taken together, would indicate flat to 1 bcf/d of year/year (y/y) demand growth,” Mobius Risk Group said.

If that trend continues throughout the remainder of the injection season, end-of-season storage levels should be near 3,600 Bcf. If the y/y demand growth witnessed so far this year continues for the rest of the summer, however, then “end-of-October inventory levels would be closer to 3,400 Bcf, which should, in turn, support higher prices heading into the winter,” Mobius said.

There were 72 cooling degree days (CDDs) for the reporting week, compared with 76 CDDs in the same week a year ago and a 30-year normal of 58 CDDs for the period. Traders said the biggest factor affecting the gas market in recent months was whether production, which is at record highs, would be enough to cut the vast storage deficit and boost stockpiles to normal levels before next winter. Production in the Lower 48 held at a record-high average of more than 79 Bcf/d during the past 30 days.

On Wednesday, however, Genscape Inc. reported that just days after production rebounded to near 79.4 Bcf/d, volumes have sunk again to an estimated 77.65 Bcf/d. On a day/day (d/d) basis, East production is down nearly 0.47 Bcf/d, and estimated volumes out of Texas are down nearly 0.4 Bcf/d d/d.

The West Virginia declines are largely because of Columbia Gas receipts from the MarkWest Sherwood 1 plant dropping nearly 0.35 Bcf/d from Monday. The Northeast Pennsylvania declines were being led by Tennessee Gas Pipeline losing about 0.28 Bcf/d of receipts from the UDP Liberty Dehy in Bradford County, PA, and about 0.15 Bcf/d from the Williams Teel Dehy plant in Susquehanna County, Genscape senior natural gas analyst Rick Margolin said.

Still, production is expected to grow considerably, with the EIA’s newest monthly Drilling Productivity Report predicting that production of natural gas would continue to surge in July, rising by 1.1 Bcf/d.

Any production growth could limit additional rallying, Bespoke said, and the market needs to see liquefied natural gas (LNG) exports return for prices to really get a bid, “especially with cash prices getting hit hard” on Tuesday. “However, with the current storage deficit and early July heat, we do not yet see risk for prices breaking down as instead another resistance test looks more likely,” chief meteorologist Jacob Meisel said.

The return of LNG-induced demand may have to wait a bit, however, as Genscape late Monday alerted proprietary clients that its monitors detected signs that Cheniere Energy Inc.’s Sabine Pass Train 1 was shutting down. The alert was issued before nominations data was published and confirmed its observations.

For Wednesday’s gas day, “nominated deliveries to Sabine have dropped to 2.34 Bcf/d, about 0.51 Bcf/d below weekend levels,” Genscape said. Weekend volumes were up at 2.88 Bcf/d, a recovery of about 0.7 Bcf/d from the prior 30 days when volumes were suppressed due to the weekslong shutdown of Train 3 Genscape cameras were able to detect the restart of Train 3 well ahead of nominations data as well.

Turning to spot gas market action, prices strengthened in response to rebounding Nymex futures as well as some localized heat in pipeline-constrained regions. SoCal Citygate notched a third straight day of gains as next-day gas traded in a wide range between $3.40 and $4.10 before ultimately averaging $3.79, up 38 cents on the day.

This week’s sharp increases have occurred as daytime highs averaged across the L.A. Basin were expected to reach the mid-80s on Wednesday, about 5 degrees above normal, and remain elevated through Friday. This has boosted Southern California Gas (SoCalGas) system demand to 2,346 MMcf/d, the third highest demand day since the start of May, according to Genscape.

It is possible some of the recent SoCal strength is a product of upstream fundamentals as well, the company noted. “Demand in the Pacific Northwest is lifting Sumas basis to attract molecules to that market,” while production drops in the West Texas Permian have contributed to Waha basis picking up 43 cents day/day, Margolin said.

To meet the demand gains, SoCalGas has had to rely on flowing supply from pipelines due to low system storage inventories. Yet, many of the import paths are operating under reduced capacities, pushing utilization rates high.

This stress on inbound pipes was a major factor in the California Public Utility Commission’s (CPUC) decision to allow SoCalGas to increase the Aliso Canyon storage facilities inventory from 24.6 Bcf to 34 Bcf. The CPUC has also requested additional information from SoCalGas about the prolonged maintenance events that have been severely limiting its import capacity. The CPUC has requested that SoCal provide more information on these outages by June 29.

After the Aliso Canyon leak was stopped in early 2016, state law granted the CPUC the authority to set working capacity limits for the facility. Before the leak, the working capacity was 86.2 Bcf; it has been set at 24.6 Bcf since last fall. SoCalGas’ current overall storage inventory is 60.1 Bcf. The three non-Aliso storage facilities have a combined working capacity of 49.1 Bcf, which is estimated to be 72% full at 35.5 Bcf, Genscape said.

Across the country, Appalachia pricing points continued to peel back as comfortable temperatures were expected to remain in the region for the next several days. A weather system is currently tracking across the north-central United States with showers and thunderstorms, while a second warmer system over Texas is producing heavy showers, according to NatGasWeather.

“These systems will lead to locally cooler conditions and lighter demand with highs mainly in the 70s and 80s. The northern U.S. will remain mostly comfortable this weekend, while the nation’s hot spot becomes California and across the Southwest as highs reach the 90s to 100s,” the weather forecaster said.

In the Northeast, prices were unusually higher despite the mild weather conditions. Transco Zone 6-NY was up 14 cents to $2.81, while Algonquin Citygate was up a dime to $2.71. The gain at Algonquin was largely due to planned work on Algonquin Gas Transmission’s Southeast compressor station, which was delayed to Thursday (June 21) from Wednesday (June 19). The event could cut up to 300 MMcf/d of mainline flows.

In other news, Genscape said Wednesday that an aerial view of Transcontinental Gas Pipe Line’s Atlantic Sunrise project on June 13 appears to show the project further behind than it was initially expecting, “with several sections of the southern spreads still on the surface waiting to be lowered in.”

Based on observations of long stretches of pipeline remaining on the surface, Genscape has moved the expected in-service date for Atlantic Sunrise’s greenfield pipe to August 1, 2018.

“The compressor station on Central Penn South, Station 610, appears to have all the major components in place, and is likely somewhere in the midst of the electrical and plumbing work. Williams has said that these stations will not be in service until several months after the greenfield pipeline, which is a reasonable timeframe for work remaining,” Genscape analyst Colette Breshears said.