The New York bulk electricity grid will have adequate resources — in the form of in-state generation, imported energy and capacity and demand-side resources — to meet forecasted summer demand for 2007, according to the New York Independent System Operator (NYISO). However, the grid operator expressed concerns about its overwhelming reliance on natural gas as a fuel source.

According to NYISO’s just released Power Trends 2007 study, the current condition of the bulk electricity grid is also adequate to meet near-term reliability requirements through 2010. However, significant infrastructure (generation, transmission and demand response) additions will be needed in southeastern New York beginning in 2011 and on a statewide basis in 2012 in order to maintain the adequacy and reliability of the grid. The report found that if left unaddressed, these deficiencies would become “acute” by 2016.

In its discussion on infrastructure, NYISO warned that economic and environmental factors have combined to limit the addition of new fossil-fuel power plants in favor of those built to run entirely or primarily on natural gas. The ISO noted that while gas-fired plants are relatively clean and can be built quickly, these factors have “exacerbated the power sector’s reliance” on a single fuel, thereby exposing consumers to all of the attendant price and supply risks. In addition, NYISO found that the existing gas pipeline infrastructure has already imposed supply difficulties in neighboring systems and is a concern in New York.

To increase natural gas supply, NYISO said the resource will increasingly have to be imported in the form of liquefied natural gas (LNG). But increased LNG shipments means more LNG receiving terminals will be needed. The siting of such facilities is controversial and therefore unpredictable.

“The source of the LNG is, for the most part, found in troubled parts of the world and subject to international political factors similar to those for oil supply,” the NYISO said. “Nevertheless, such facilities should be developed in the United States so that New York does not experience serious fuel supply difficulties for its power plants.”

The ISO said that over the past 12 months, 1,250 MW of new capacity has been added to the bulk electricity grid — with 179 MW of these additions coming in the form of new wind power development. Also, more than 800 MW of new transmission capability has been added. In addition, there has been a 12.5% increase over the past year in the number of megawatts that can be made available to the grid through the use of demand response programs. This year, retail customers are expected to curtail a little more than 1,000 MW if called upon to do so by the NYISO, and an additional 500 MW of voluntary curtailment could be available when system operating conditions are tight.

The report noted that while the summer of 2006 brought heat waves and some power outages at the distribution level within the cities, New York’s bulk electricity grid performed with “consistent reliability” despite the fact that electric demand in the state set record peaks three times over a three-week period in July and August.

“While the current state of the bulk electricity grid is good, indications are that this positive outlook will change for the worse in the next three to four years if certain conditions are not addressed quickly,” the report said. “Load growth in excess of 2% per year in southeastern New York — the Lower Hudson Valley, New York City and Long Island — and barely adequate transmission capability into that region of the state will lead to violations of reliability criteria by the year 2011.”

NYISO explained that the analysis was conducted during the first phase of its planning process, which consisted of an assessment of the state’s electric reliability needs. A solicitation for market-based and regulated solutions to these needs under the second phase of the planning process is currently under way. “If market-based solutions are not adequate or timely, regulatory ‘backstop’ proposals may be called upon,” the report found. “The proposed market and regulatory options will be known by the middle of this year. It remains to be seen, however, how many of these solutions can be in place within the relevant time frame given existing procedures for permitting and siting large generation and transmission projects in the state.”

The report identified other concerns and challenges facing the state. They include:

Working with federal and state agencies and organizations in the private sector to formulate a coordinated approach to deal with energy, environmental and economic development issues would enhance system reliability and benefit power consumers across the state, according to the report.

The deficiencies discussed within the report were outlined in the Reliability Needs Assessment (RNA), a NYISO companion study to Power Trends issued in March. Solutions to longer-term bulk electricity grid needs identified in the RNA have been solicited by the NYISO and will be addressed in the NYISO’s Comprehensive Reliability Plan, due out later this summer. 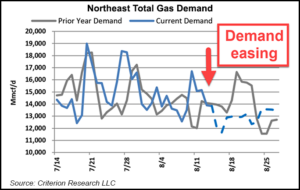 After some bouts of unusually hot summer weather, easing demand on the East Coast prompted a sharp sell-off in natural gas forward prices in the region for the Aug. 6-12 period.  With prices elsewhere across North America coming in mixed, September ultimately averaged flat at $1.886, while October slipped a penny to average $1.976 and…