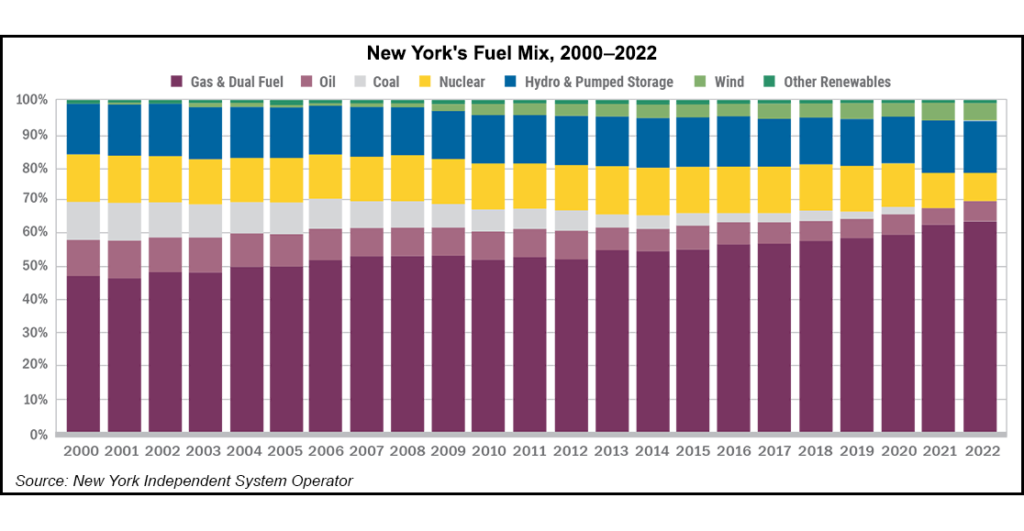 NYISO said it is stocked with a total of 43,184 MW of available supply, which includes imports from neighboring regions, leaving it “well positioned to meet this winter’s forecasted demand and maintain reliability throughout the season,” said Vice President of Operations Aaron Markham.

The 2022-2023 winter season’s forecasted peak demand is about 685 MW higher than last winter’s actual peak demand of 23,235 MW, according to the grid operator.

This winter’s projected peak demand is 1,845 MW lower than NYISO’s all-time record peak of 25,738 MW set in January 2014 during a multi-day polar vortex. Extreme weather this upcoming season, however, could push demand to as much as 26,086 MW, the grid operator noted.

In an extreme weather scenario, when coupled with the state’s expected access to natural gas-fired generation, NYISO may still have a projected generation surplus of 1,620 MW.

In preparation for this winter, NYISO assessed the state’s generation capabilities via surveys distributed to generators across the state.

Feedback highlighted that despite seasonal and weekly fuel surveys indicating oil and dual-fuel generation at sufficient start-of-winter oil inventories, this year’s inventories are lower than previous winters’. This is true regionally and across the United States, NYISO said, adding that it would be monitoring regional energy supplies.

What’s more, Markham said that “…as we have been highlighting for over a year, national and international economic conditions are contributing to a spike in consumer bills.”

Among the multiple utilities seeking higher rates in the state is Consolidated Edison Co. of New York Inc. (ConEd), which distributes electricity to 3.3 million residential and business customers in the Big Apple and natural gas to 1.1 million customers, making it New York’s largest utility.

At the start of 2022, ConEd filed with the New York Public Service Commission (NYPSC) to raise its electric and gas rates for 2023.

The utility has since requested to extend the suspension of new rates  in order to recover or refund any revenue from under- or over-collections, which ConEd argued “would keep the Company and its customers in the same position they would have been absent the extension,” according to a November filing.

The NYPSC recently accepted ConEd’s request, extending the suspension until April 25, 2023, at which point new rates are likely to come into effect. ConEd’s natural gas customers using about 100 therms/month may see a bill increase of about $37.88/month, or a total increase of about 19.1% compared with last year. Electric customers could see a 13.2% increase for 600 kWh, a jump of about $20.90/month. Rates are subject to change as the case progresses.

According to an August filing from ConEd, these rate increases would help fund the company’s Clean Energy Commitment, which supports New York State’s climate goals.

In 2019, New York enacted the Climate Leadership and Community Protection Act, aka the Climate Act, requiring 70% of the state’s electricity to come from renewable sources by 2030, an emissions-free power sector by 2040, and net-zero economy-wide greenhouse gas emissions by 2050.

During a winter preparedness media advisory event, Markham noted that this winter alone, about 477 MW of fossil generation is expected to retire.

Supplanting the fossil fuel generation losses will likely be roughly 700 MW of solar photovoltaic and wind generation, though, “intermittent resources such as solar and wind are not fully dispatchable,” Markham said. “…From a reliability perspective,” the renewable additions “are not a one-for-one replacement for the fossil resources being retired.”

What’s more, Gov. Kathy Hochul, a Democrat, made clear at the start of the year that the state would ban fossil fuel hookups, including natural gas, in new buildings by 2027.

In December 2021, a month prior to Hochul’s announcement, New York City enacted a ban on natural gas hookups in new buildings beginning at the end of 2027, though the ban would take effect for buildings up to six stories tall before 2024.

NYISO CEO Rich Dewey said during the winter preparedness conference that “As we sit here looking into the future, we do see increased demand as a result of increased electrification in buildings and the transportation sector.”

NYISO cited its 2021-2030 Comprehensive Reliability Plan, “which concluded that while the state’s bulk electric system meets current reliability requirements, risks to reliability and system resilience remain,” chief among which are shrinking reliability margins across the grid as fossil fuel retirements outpace additions.

“…We do not identify a reliability need for the next ten years,” Markham said. “Now that doesn’t mean we don’t see risk…past 2025, that’s when we see tight margins.” However, while surrounding regions, such as New England, may be facing reliability risks sooner, “New York has the capability to operate under a dual-fuel system…one of the things that puts strains in other regions is access to natural gas,” Markham noted.