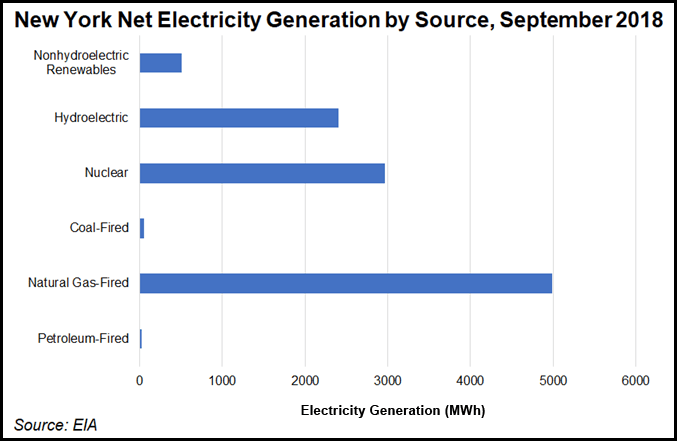 If adopted, the carbon pricing design would be the first of its kind in the country for a competitive wholesale electricity market. Under Gov. Andrew Cuomo, the state continues to pursue a carbon-free economy, with the goal of reducing carbon dioxide emissions 40% by 2030 and 80% by 2050. NYISO noted in its latest proposal that carbon pricing would allow the state’s wholesale electricity markets to “harmonize” with state policy.

The latest proposal builds on an outline and recommendations released earlier this year. In further refining the proposal based on stakeholder input, the latest version represents the work of varied interests including environmentalists, generators, regulators and energy experts.

Fossil fuels, including natural gas, oil and coal, still account for 65% of New York’s generating capacity, according to NYISO’s 2018 Power Trends report. A growing amount of the state’s gas turbine and fossil fuel-fired steam turbine capacity is reaching retirement age. For gas turbines, NYISO said, 2,356 MW of capacity in the state is 46 years of age or older.

At the same time, however, generation additions in the state have primarily been natural gas-fired and wind-powered. Since 2000, nearly 12,000 MW of new generating capacity came online in New York state.

NYISO would incorporate the so-called social cost of carbon emissions into the state’s wholesale energy markets using a carbon price in dollars per ton of carbon dioxide emissions. NYISO would apply the carbon price by debiting each supplier a charge for its carbon emissions at the specified price. Suppliers would embed these additional carbon charges in their offers into the power market, incorporating the price into the unit commitment, dispatch and price formation through NYISO’s existing processes.

The grid operator said the New York Public Service Commission would set the gross social cost of carbon through the regulatory process in a way that would likely align with the state’s clean energy programs.

The proposal would ultimately need the backing of Cuomo, who was recently elected to another term, and other stakeholders in order to be implemented. Cuomo recently strengthened the state’s “clean energy” commitments by pledging carbon neutral electricity generation by 2040 in a vague policy prescription during an outline for the first 100 days of his third term.