While Covid-19 continues to have a financial impact, Portland, OR-based NW Natural is pursuing acquisitions of small water utilities, rolling out hydrogen research projects and expanding its sources of renewable natural gas (RNG). 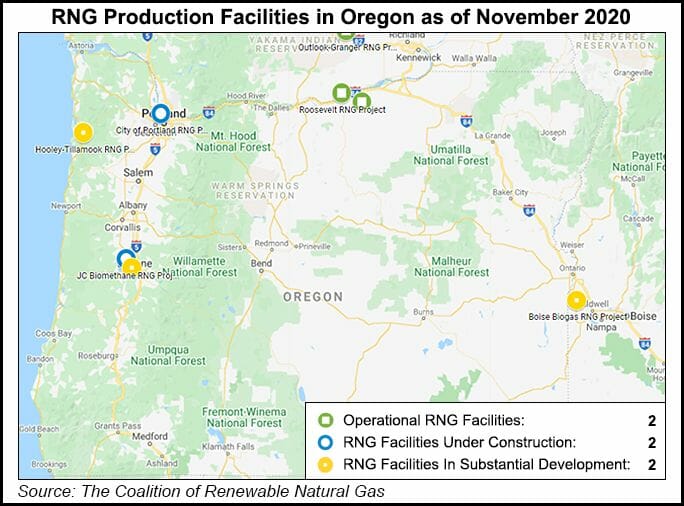 CEO David Anderson and senior executives outlined third quarter results and projects underway during an earnings conference call Thursday. After the initial peak of the coronavirus, economic indicators have bounced back, with customer growth “averaging about 1.9% annually, and the gas-only utility added about 13,800 meters over the past 12 months.”

Last month, NW Natural partnered with the Eugene Water and Electric Board (EWEB) and the Bonneville Environmental Foundation in signing a memorandum of understanding to explore the development of renewable hydrogen production facilities in North America. The facility would demonstrate how renewable and low-carbon electricity could be transformed into “green” hydrogen. Plans include the potential for a 2-10 MW facility in Eugene, OR.

The project would produce up to 10 MW of renewable-based power, said Senior Vice President Kim Heiting, who handles operations and marketing. The project calls for using excess renewable power to create green hydrogen, including utilizing waste carbon dioxide from industry to “methanate” the hydrogen for a 5% blend with natural gas.

“This is an important part of our evolution regarding hydrogen, and we’re still seeking partners and have identified a site for the demonstration,” Heiting said. “In parallel to that, we have a team at our training center doing research on blending up to 5% hydrogen with natural gas. We’ve set up an isolated gas system for testing, and we’re really pleased with the testing so far.”

In the ongoing RNG expansion program, Vice President Justin Palfreyman of strategy and business development said the utility has received a “robust response” to a request for proposals (RFP) from potential producers. He said the utility is performing due diligence prior to negotiating supply deals or partnership agreements.

“In parallel with the RFP we continue to evaluate investment opportunities through a new state-authorized program under Senate Bill 98, so we expect over time we will end up with a portfolio of RNG purchase agreements and investments in RNG production facilities,” Palfreyman said. “The hydrogen and RNG projects are separate, but they will both have meaningful impacts on our carbon reduction goals.”

CFO Frank Burkhartsmeyer offered a summary of Covid-19 impacts. Through the third quarter NW had incurred about $7 million in incremental costs and booked $3.1 million in deferred amounts for Oregon virus-related costs.