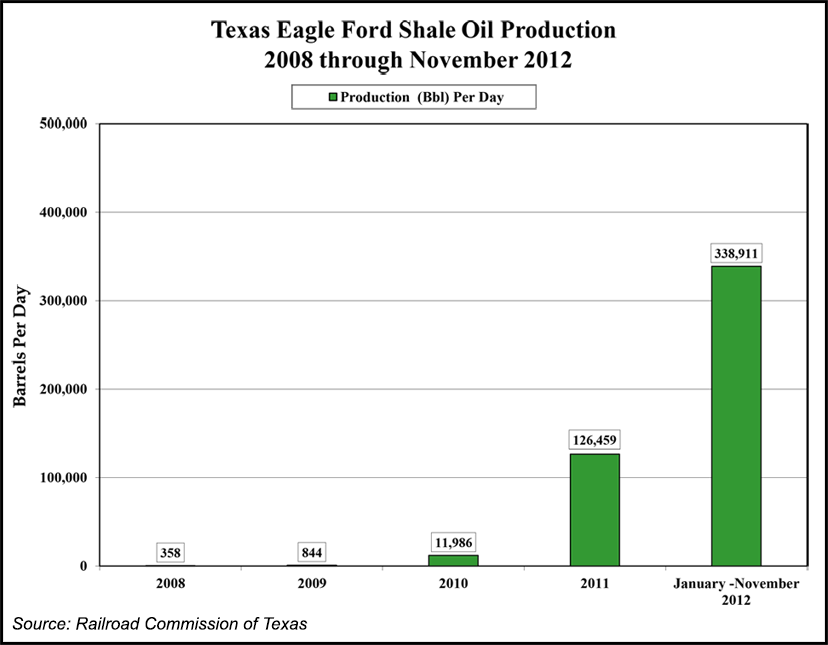 However, they “…are now getting all filled up with the Eagle Ford,” said CEO Curt Anastasio during an earnings conference call Friday. “…[T]hat was our main challenge the last few years: what can we do to fill up that underutilized system? And we’ve hit upon an answer, part strategy, part luck, frankly, all of that great work that the upstream people have done in the Eagle Ford to fill up that system…”

Late last year, NuStar Energy LP said it was expanding its South Texas crude oil system system with the support of a long-term pipeline and terminal services agreement struck with ConocoPhillips (see Shale Daily, Dec. 17, 2012). This was about one month after the partnership said it was buying Eagle Ford crude oil pipeline, gathering and storage, and natural gas liquids assets from TexStar Midstream Services LP as it transitions to a fee-based pipeline and storage business and away from margin-based refining and marketing (see Shale Daily, Dec. 18, 2012; Nov. 9, 2012).

“Our strategic capital spending is projected in the range of $600 million to $625 million with about $500 million of it related to projects in the Eagle Ford Shale.”

Anastasio said the Eagle Ford crude pipeline assets are turning out to be “better than expected.”

NuStar’s TexStar pipeline and other pipelines that it contributed to its TexStar project are the third pipeline system that NuStar has put into service in the Eagle Ford, said Danny Oliver, senior vice president. TexStar is running at about 70,000 b/d, which is ahead of expectations, Oliver said. “We expect to be near 100,000 b/d sometime here in the next month or two, probably March.”