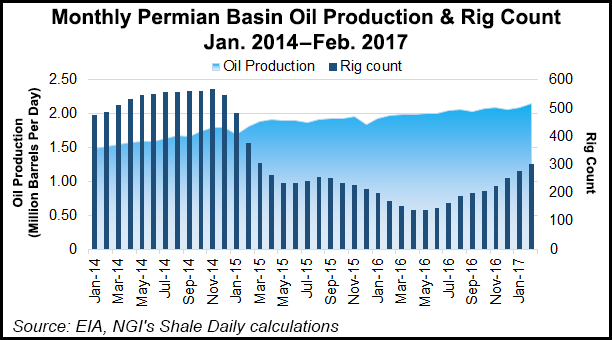 Navigator also has a gathering system with more than 200 connected producer tank batteries capable of more than 400,000 b/d of pumping capacity covering more than 500,000 dedicated acres. Of its 1 million bbl of crude storage capacity, about 440,000 bbl is leased to third parties.

The deal is expected to close by late May, subject to conditions, including regulatory approvals.

“We are excited about starting 2017 with a strategic acquisition, and the addition of Navigator’s Permian assets marks NuStar’s entry into one of the most prolific basins in the United States,” said NuStar CEO Bradley C. Barron. “We expect that the purchase price, when coupled with modest future growth capex to build out the system, will result in a high single-digit multiple as volumes ramp over time.”

NuStar is one of the largest independent liquids terminal and pipeline operators in the nation with 8,700 miles of pipeline and 79 terminal and storage facilities that store and distribute crude oil, refined products and specialty liquids. The partnership’s combined system has 95 million bbl of storage capacity with operations in the United States, Canada, Mexico, the Netherlands, including St. Eustatius in the Caribbean, and the United Kingdom.

“It’s been no secret that we’ve been actively searching for a way to break into the Permian Basin, which currently represents approximately 40% of all U.S. onshore rig activity,” Barron said Wednesday during a conference call to discuss the transaction. “For the past 18 months or so we’ve actively looked at opportunities in the Permian, but for one reason or another they’ve not met our acquisition criteria or they included assets that were either too risky or were outside of our core areas of expertise.”

In September 2015 Dallas-based Navigator began service on its Big Spring Gateway (BSG) Pipeline System, serving the Permian Basin and making deliveries into the Sunoco Logistics-owned West Texas Gulf Pipeline and the Permian Express 2, with initial capability to transport up to 40,000 b/d of crude, which increased to 160,000 b/d by the end of the year.

One year later Navigator said it would provide crude gathering services to Surge Operating LLC for an area of mutual interest spanning 25,000 acres in Howard County, TX, with a new gathering system.

The Navigator assets “are located in five of the six most prolific counties in the Midland Basin,” Barron said. “So not only would this be considered first-tier acreage, what we’re talking about here is the core of the core of the Midland Basin…[W]e’re very impressed with the quality of the build. These are mostly newbuild assets, and our operations team is very impressed with their physical construction…

“The Navigator assets are consistent with our existing crude oil operations in that there’s no first purchasing or gas processing exposure. Additionally, we expect these assets to provide significant growth prospects through volume ramp from existing producers with bolt-on acquisitions and larger takeaway capacity opportunities.

“We will also have opportunities to expand the system organically and bolt on future acquisitions and possibly develop larger takeaway capacity projects, including a solution that could link the Navigator system all the way to our docks at Corpus Christi, TX, by way of our existing Eagle Ford operations.”

During the conference call Barron did not take questions as the company is in a quiet period for an ongoing equity offering. To fund part of the purchase, NuStar has priced an upsized equity offering of 12.5 million common units for $579 million gross, which is scheduled to close Tuesday.. Two more capital market transactions are expected. Bridge financing is in place to backstop capital markets activity, Barron said.

The Permian Basin generally and the Midland sub-basin in particular have drawn increasing producer and infrastructure development activity. For example, about one month ago, EPIC Pipeline Co. LLC began offering capacity in a proposed crude oil and condensate pipeline that would run from the Permian to Corpus Christi, with multiple receipt points in the western Permian serving producers in the Delaware and Midland sub-basins.