“No single error or mechanical failure led” to the 2012 grounding of the ice-class mobile offshore drilling unit (MODU) Kulluk, owned by Shell Offshore Inc. and operated by Noble Drilling, according to the National Transportation Safety Board (NTSB). 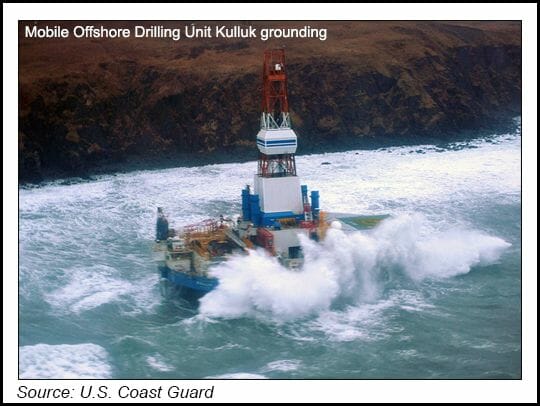 In a new accident report, NTSB said, “…the probable cause of the grounding…was Shell’s inadequate assessment of the risk for its planned tow of the Kulluk, resulting in implementation of a tow plan insufficient to mitigate that risk.”

The rig was grounded in heavy weather near Ocean Bay on the eastern coast of Sitkalidak Island off Kodiak Island, AK, during a towing operation in December 2012 (see Daily GPI, Jan. 8, 2013; Jan. 4, 2013). Last year the U.S. Coast Guard (USCG) found that poor planning of the towing operation led to the rig’s grounding (see Daily GPI, April 4, 2014). NTSB appeared in its report to reach a similar conclusion.

“The plan was created to move the MODU at a time of year with a known likelihood of severe weather conditions for reasons unrelated to operational safety,” NTSB said. “Shell had retained warranty surveys on all five previous tows of the Kulluk. No regulatory requirement existed for a warranty surveyor to review and approve, or suggest modifications to, the tow plan and its components. The surveyor that Shell retained for the accident voyage approved the tow plan in its entirety. This was the only external review of the tow plan and the equipment that was to be used in the planned tow.”

USCG was not required to oversee the tow, NTSB said, adding that its role was limited to delivering replacement engine components to the disabled tow ship and to rescuing Kulluk personnel. Other countries do things differently, NTSB said.

“Many maritime regulators in countries with operations in environments with the potential for severe weather actively oversee tow operations,” the agency said. “For example, Norway addresses many of the shortcomings in the oversight of tow gear and severe weather avoidance that were evident in this accident. Canada similarly addresses safe towing operations, including specifying parameters for tow gear strength…”