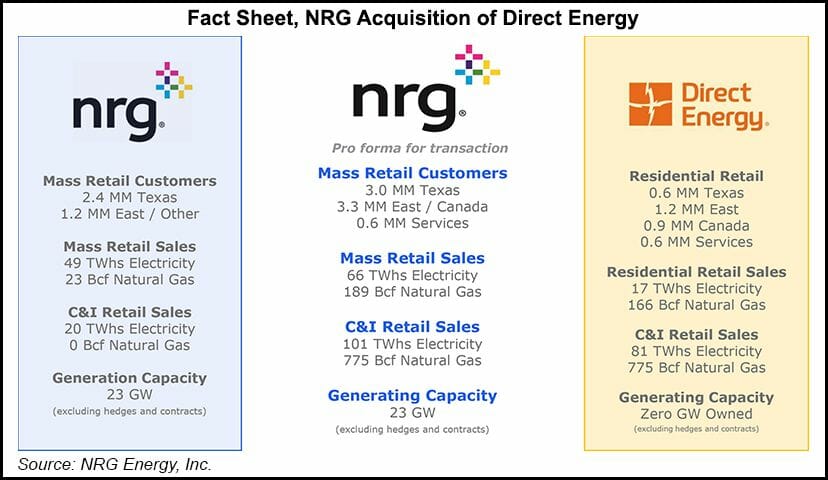 NRG Energy Inc. on Friday said it has a definitive agreement to acquire Direct Energy, a leading North American natural gas retailer and subsidiary of Centrica plc, in a $3.625 billion, all-cash transaction.

Including wholesale and retail sales, Direct Energy transacted 7.5 Bcf/d of natural gas in the first three months of this year, making it the continent’s sixth-largest gas marketer in NGI’s 1Q2020 ranking.

The transaction, which is expected to close by year-end, “exceeds NRG’s investment criteria and is accretive to free cash flow,” the company said. “In addition, NRG expects to achieve its targeted credit ratios within 12 months of closing, thereby maintaining its commitment to achieve investment grade credit metrics.”

“Direct Energy operates one of the largest natural gas retail platforms in the country, which we see as a logical extension of our current product offerings,” NRG CEO Mauricio Gutierrez told investors during a conference call Friday.

“We have been impressed with the strong track record of Direct’s retail gas business and expect they will benefit from operating on our platform and under our risk management program.”

The acquisition will expand NRG’s “natural gas retail and expertise,” the company said, also noting that, “for NRG, the acquisition builds on and complements its integrated model, enabling better matching of power generation with customer demand.

“It also broadens NRG’s presence into states and locales where it does not currently operate, supporting NRG’s objective to diversify its business.”

The acquisition also “provides substantial regional diversity to NRG given that 76% of Direct Energy’s home energy customers are outside of Texas,” said NRG, which is one of the largest electricity retailers in Texas through subsidiary Reliant Energy.

Centrica said Friday the proposed sale is part of its strategy “to become a simpler, leaner business.” It plans to focus on its core markets of the UK and Ireland, and that proceeds would be used “to significantly reduce net debt and to make a material contribution to our pension schemes.”

Both Centrica and NRG are among a growing number of utilities aiming to achieve net zero carbon emissions by 2050.