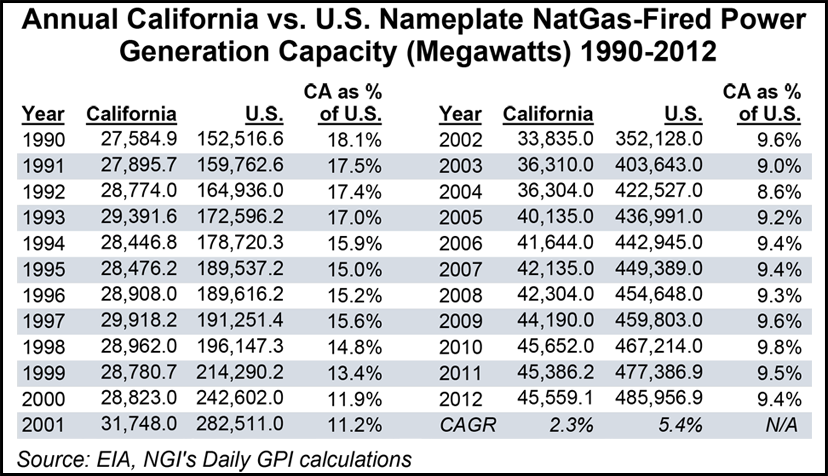 Located about 30 miles south of the now-closed San Onofre Nuclear Generating Station (SONGS), NRG’s Carlsbad unit has a 600 MW tolling agreement with Sempra Energy’s San Diego Gas and Electric Co. that is pending approval at the California Public Utilities Commission (CPUC). Some environmental and ratepayer advocacy groups are urging the CPUC to reject the deal.

But during a conference call in which Princeton, NJ-based NRG again reported losses for the second quarter and the first six months of 2014, similar to red ink in those periods last year, Crane said he continues to be “very excited” about the project, but he would not speculate on when the CPUC might act on the proposal, which has been around in various forms for nearly a decade (see Daily GPI, July 5, 2011).

“We think this is a very good project for the state of California,” Crane said in response to an analyst’s question. “Ultimately we think it is a good project for NRG Yield [the power plant and renewables financing arm]. With the CPUC’s approval we can continue to add to the stability of the power supplies in Southern California.”

In response to a question about a pending power supply proposal request from Southern California Edison (SCE), for which NRG is one of the bidders, Crane said the overall request-for-proposal process is subject to confidentiality agreements and he is not sure when SCE will make a decision on which renewable and gas-fired generation projects to select.

“I think it is fair for you to assume that NRG was responsive to every aspect of what SCE was looking for in its RFP [both renewable and gas-fired projects],” he said. “We would be very excited to participate in both conventional resources and what Edison calls ‘preferred resources.'”

Crane said he is unsure how much of SCE’s request is for gas-fired generation.

In 2012, after several years of processing and various starts and stops, NRG’s plan to repower its existing gas-fired plant in Carlsbad using a fraction of the 100-acre existing prime seaside acreage was unanimously approved by the California Energy Commission (CEC). The CEC’s five commissioners set aside possible conflicts with local and state zoning restrictions (see Daily GPI, June 4, 2012).

At the time, NRG planned to move ahead with it conditioned plans to construct a $500 million, 558 MW gas-fired plant using 23 acres of the existing site for its 900 MW Encina plant, but the project has yet to get started.

Natural gas-fired power generation capacity has grown faster nationwide (5.4%) than it has in California (2.3%) since 1990, according to Energy Information Administration data. Gas-fired capacity in the state reached 45,559 MW in 2012, accounting for 9.4% of the national total.