Eagle Ford pure-play operator Swift Energy Co. said it plans to spend between $85 million and $95 million on capital expenditures (capex) in 2017. It plans to run one rig in the Eagle Ford and complete a dozen wells there. 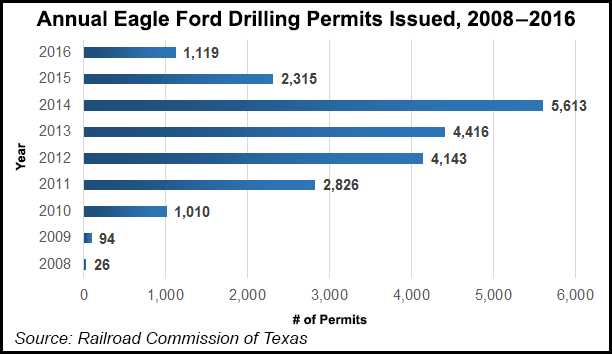 The Houston-based company said Monday that one of the 12 wells will be its first appraisal well in the Oro Grande prospect, located in LaSalle County, TX. The well will be completed during the second quarter.

Swift said it expects production for 2017 to range from 47.5-49.5 Bcfe, with natural gas accounting for about 85% of total production. The company said its capex budget is expected to be funded “primarily through internally generated cash flows and, to a lesser extent, available borrowings on the credit facility.” Swift said that as of last Friday, it had hedges in place for more than 70% of expected oil and gas production, at average weighted prices of $48.10/bbl and $3.10/MMBtu, respectively.

“We recently priced a $40 million private placement of common stock, which was a major objective for the company for early 2017,” said interim CEO Bob Banks. He added that the company “now has approximately $160 million in available liquidity under our credit facility and an extensive hedge program in place to support our planned capex in 2017.”

Of the remaining 11 wells Swift plans to drill and complete in 2017, nine will be in the Fasken field in Webb County, TX, and two will be on the company’s AWP acreage in McMullen County, TX. All of the wells will target the Lower Eagle Ford Shale.