National Oilwell Varco Inc., which designs and manufactures upstream equipment, is seeing a dramatic shift in business away from its mainstay, the offshore, which has dominated order books for the last decade, to U.S. land, where the outlook now looks “much brighter,” CEO Clay Williams said Thursday. 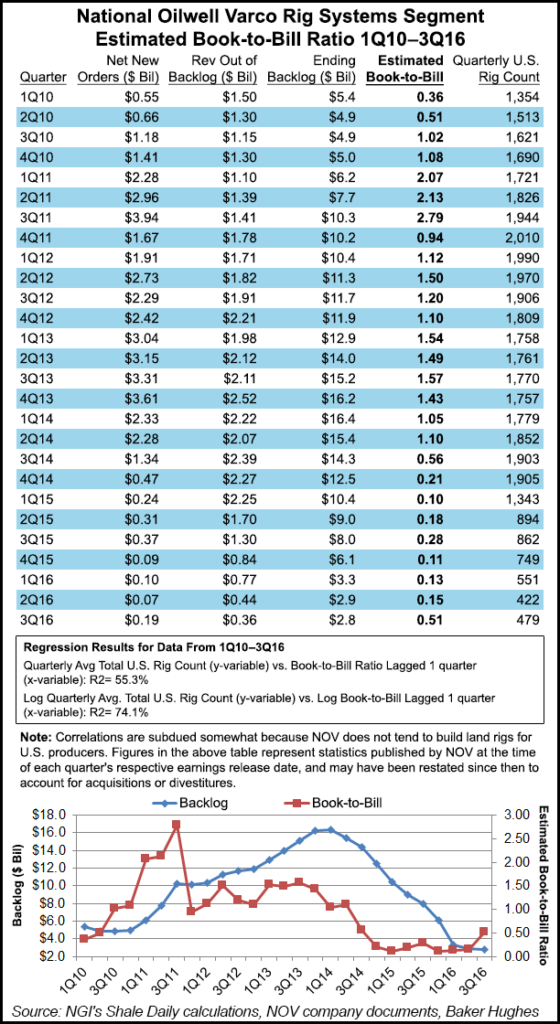 The technology manufacturer was hamstrung in 3Q2016 by a sharp decline in offshore orders. However, improving commodity prices may set the stage for a “broader recovery” in 2017, Williams said during a conference call to discuss quarterly results.

“Orders for equipment for the land market significantly outpaced offshore equipment demand in the quarter, reducing our offshore mix within our backlog to 81%,” the CEO said. “Overall demand for offshore equipment remains very low, despite a few conversations about potential new platform rigs…Our outlook for demand for land rigs is much brighter, as we have several inquiries for new land rigs for North America and numerous tenders being let for rigs in international markets, for customers who have shrewdly observed that the upgraded rig fleet in North America had much to do with the shale revolution of the prior peak.

“We believe 2017 will see meaningful resumption in demand for land equipment…We are quoting upgrade packages for 7,500 psi mud systems, higher torque and new NOV control systems required to drill longer laterals. In fact, top-drive sales in the land market picked up in the quarter due to the need for higher torque to execute longer laterals.”

During the third quarter, NOV saw “some improved demand in certain of our businesses, mostly North America, where the rig count grew 28% sequentially. For the first time since the downturn began, we posted top-line growth in our wellbore technologies and completion and production solutions segments. We also saw our cost reductions begin to outpace the steep declines in revenues we’ve seen through the past seven quarters,” with three of the four business units posting higher margins because of “aggressive cost reductions.”

Since the downturn began in late 2014, NOV revenues have declined 71%. Customers have slashed spending “to the lowest levels possible and the gas industry has delayed or canceled future projects totaling over 7 million b/d…Nevertheless, time is on our side,” he said.

Blame it on the offshore, Williams said. The company took a $972 million noncash goodwill impairment charge associated with its offshore rig systems business unit in 3Q2016 because of the “diminished outlook,” based on an “accelerating restructuring process” as operators stack more rigs.

NOV is in the process of shuttering 286 facilities worldwide, but there will be “ample inventory to respond to customers’ needs,” he said. Headwinds are expected to continue in some international markets, which is going to offset U.S. growth. “In the meantime, we continue to aggressively reduce costs, improve efficiencies, and invest in our comprehensive technology portfolio.”

To date this year, NOV has added new technologies within completion tools, directional drilling tools, condition-based monitoring services and drilling optimization services, the CEO said. “All are winning significant customer interest, and all better position NOV for the inevitable recovery.”

Two of NOV’s four segments drove a revenue decline, with rig systems reporting a 69% decline year/year and a 17% plunge sequentially to $470 million on an operating loss of $962 million. The backlog for capital equipment orders at the end of September was $2.76 billion, while new orders totaled $185 million, representing a book-to-bill of 51% when compared to the $363 million shipped out of backlog.

In the rig aftermarket, revenue fell 44% from a year ago and 12% from 2Q2016, with operating earnings of $72 million, or 22.4% of sales. Wellbore technology revenue slumped 37% year/year, but it climbed 3% higher sequentially; operating losses totaled $94 million, or almost 18% of sales.

The completion and production solutions business saw its quarterly revenue off by one-third from 3Q2016, but it also rose sequentially by 1% to $543 million. The segment reported an operating loss of $61 million, or 11.2% of sales. Backlog for capital equipment orders was $812 million at the end of the quarter, down 31% from 3Q2015 and 14% from the second quarter. Revenue out of backlog during the quarter was $319 million. New orders totaled $184 million, achieving a book-to-bill of 58%.

The focus to secure more services and new technology continues. Progress was made on several fronts, including two technologies being tested in West Texas.

For example, NOV designed and manufactured a record-setting string of 2-5/8-inch coiled tubing measuring 25,595 feet and 149,748 pounds for an undisclosed service company, which enabled the customer to mill out composite bridge plugs and perform logging runs in a well with a 12,500-foot lateral.

The well was “far beyond the typical maximum lateral lengths for coiled tubing mill outs in West Texas. Every step of the process, including string design, planning, milling and shipping and spooling and installation, was executed by NOV’s trained engineers and technicians in less than 10 days.”

NOV also has begun marketing BlackStar II, a dual-telemetry measurement-while-drilling system, which combines electromagnetic (EM) and mud-pulse data transmission in one tool. Telemetry converts traditional logging tool measurements to a signal that can be transmitted to the surface. In one customer trial in the Permian, the tool was used from the “kickoff point at 7,800 feet to a total depth of 15,878 feet,” and it maintained the EM signal the entire time.

NOV’s rig systems segment also received two land rig orders during 3Q2016, including one for a state-of-the-art extended reach drilling rig for Alaska’s North Slope. The high-specification rig is able to drill to 33,000-plus feet, or 6.25 miles, versus the 22,000-foot, or 4.17 mile, which is the reach of current rigs used by the producer.