In a continuing sign that things are beginning to move in a positive direction for the oil and gas markets — at least in the onshore — National Oilwell Varco Inc. (NOV) booked an order during 4Q2016 to manufacture 75,000 hydraulic hp of fracture stimulation pumps and associated support equipment for an independent oilfield services provider, the Houston-based company said Tuesday. 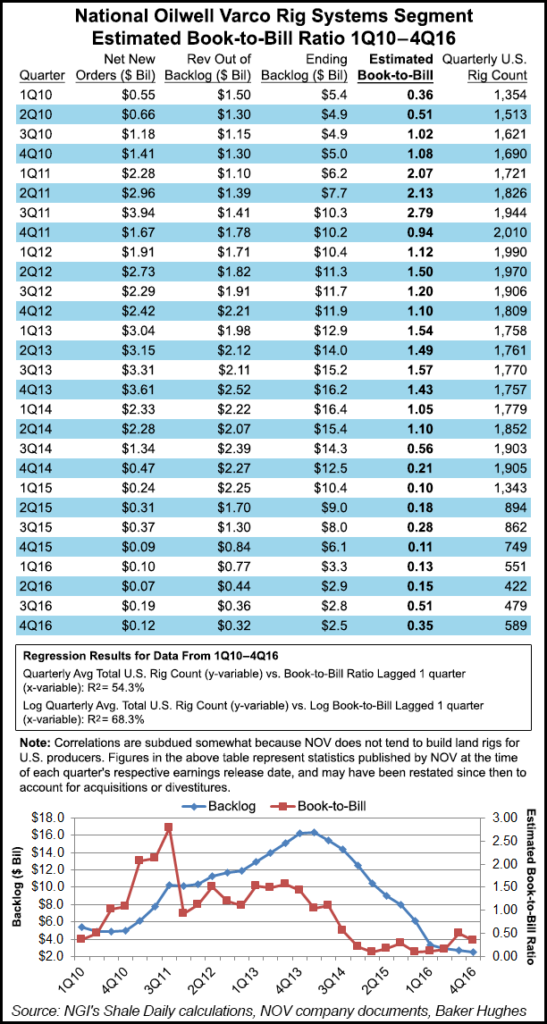 The management team of NOV, which designs and manufactures equipment for oil and natural gas drilling and production operations, offered insight into the health of its business and the overall industry during a conference call to discuss fourth quarter and year-end results.

NOV, whose business up to now has been weighted to the offshore, is continuing to see more work in the U.S. land segment for parts, equipment and technology, CEO Clay Williams said.

“For the first time in two years, National Oilwell Varco posted sequential improvement in revenues, which rose 3% in the fourth quarter, as compared to the third quarter of 2016,” he said during the call. “The company did an excellent job driving incremental profitability on this increase, posting 74% incrementals,” lifting adjusted net earnings for the second quarter in a row. Adjusted net earnings totaled $102 million, or 6% of revenues, in 4Q2016, “enabled by many cost reduction initiatives undertaken by our seasoned managers and held by rising rig count in certain areas.”

NOV during the fourth quarter saw about an 8% increase in booking for its rig aftermarket business, which provides spare parts, and January was even stronger, Williams said.

“I think January is our strongest month since December 2015 for ‘spares,’ and so that appears to be go in the right direction…Net-net, we are benefiting from reactivations of land rigs going back to work in West Texas, and we’ve been saying for the last two years, our customers are great at cannibalizing their existing stocks and spare parts and that has certainly been going on in earnest.

“At some point, they are going to run out of opportunities to cannibalize and so perhaps we’re seeing some of that turnaround as well. On the whole, I think the outlook for 2017 is getting brighter.”

“Global sales into land markets exceeded global sales into offshore markets for the first time since 2005,” Williams said. The fourth quarter mix was roughly 52% land-related, 42% offshore…Frankly, I’m glad 2016 is behind us.”

NOV has begun to benefit “from rising momentum in North American shale plays in particular, which we expect to accelerate. Our international markets still face headwinds for a quarter or two and offshore markets continue to trend down, so we still have challenges ahead. Nevertheless, $50 oil has been a welcome relief.” The opportunity in front of NOV today is to bring promising technologies to the rest of the world, he told analysts.

The company’s “most accomplished” customers using the completion and production systems “tell us that landing a long horizontal lateral in the sweet spot within a shale section without a lot of twists and turns known as ‘dog legs’ is a key success factor.” Dog legs increase vibration and drag, which present challenges.

“Sophisticated E&P customers also tell us that efficient hydraulic stimulation operations with ever higher proppant loadings and more and more stages are a key success factor. This requires reliable coil tubing units, fracture (frack) spreads, pumps and treating iron that are continually being pushed to higher pressures and asked to pump greater loads of abrasive sand…

“The big picture here is that shale technologies are extremely consumptive of even the most reliably built equipment. Shale is insatiable, it wears out rigs and frack hire, it consumes drill pipe bids, drilling motors, frack spreads, treating iron and whole host of expendables like valves, seats, coil tubing and shaker spreads. It’s like feeding a Labrador…”

“Today’s drill pipe is a highly engineered drilling instrument, and a far cry from yesterday’s dumb iron. Individually our technologies deliver discrete value, but when combined, they become more powerful still.” NOV now is combining its high-tech wired drill pipe with a new rig operating system, NOVOS, and downhole drilling mechanics to allow software applications to drive the rig “far faster than a human driller can work the break handle. The result, rigs that learn and faster, safer drilling and better understanding of challenging downhole conditions.”

The 75,000 hhp order, set to be delivered by the end of June, and other projects underway, point to a “brighter year ahead,” the CEO said.

The rig systems business generated revenues of $426 million in the final period, a sequential decline of 9% and a 58% plunge from a year earlier. Operating loss was $81 million, or 19% of sales. Backlog for capital equipment orders at the end of 2016 was $2.49 billion. New orders during the quarter totaled $115 million, representing a book-to-bill of 35% when compared to the $324 million shipped out of backlog. NOV deleted $63 million in orders for more backlog in exchange for payments negotiated with customers.

In the the rig aftermarket segment, revenue fell 40% year/year to $339 million while operating profit dipped 46% to $75 million on weak market conditions overall. The wellbore technologies segment revenue was off 30% from a year ago to $531 million, while the operating loss deteriorated to $75 million as pricing pressure in international markets intensified.

Within the completion and production solutions segment, revenue of $602 million was 19% below a year ago. The unit recorded operating profit of $17 million, versus $37 million in 4Q2015, mostly because of continuing challenges in the offshore business.

The rig businesses derive more revenue from offshore than land, but they are becoming more balanced, CFO Jose Bayardo said during the conference call. During the fourth quarter, major offshore newbuilds represented about 9% of NOV’s consolidated revenue, down from roughly 12% in 3Q2016.

The land business “will underpin much of the rig systems growth going forward,” he said. Of the new orders booked in the fourth quarter, nearly $50 million, or 44%, were for land markets, including one alternating current 1,500 hp land rig, nine mobile rigs, a large crane package and an offshore drilling rig equipment upgrade.

“In 2016, 49% of our roughly $475 million rig systems bookings were for land,” Bayardo said. “In 2017 we think that mix could shift more sharply as land rig orders will recover more rapidly than offshore. We suspect the near-term opportunities still live with smaller independent contractors adding more modern rigs to their fleets and larger contractors investing in upgrades to their existing rig fleets, pressure and torque capabilities and control systems.”

Customers conversations indicate interest in newbuild land rigs, with opportunities in the United States and international markets expanding, “however, we believe it will be the second half of 2017 before many of these conversations turn into orders,” Bayardo said. “The role drilling technology played in U.S. shale development is not lost on international operators, [which are] keenly interested in improving efficiencies and driving economic production for more challenging resources.”

As other oilfield operators have noted, including Schlumberger Ltd. and Halliburton Co., “improving market conditions are beginning to create opportunities to claw back some pricing,” Bayardo said. “Specifically we’re achieving some success on getting paid for trucking and standby on rental items, and setting price increases on new motor and bit technologies. We’re also realizing more success with our recent product introductions.”

At the end of December NOV had $1.41 billion in cash and cash equivalents and total debt of $3.21 billion, a decrease of $2 million from 3Q2016. NOV had $4.5 billion available on its revolving credit facility and a debt-to-capitalization ratio of 18.7%.