Overall November bidweek trading fared far better than the free-falling natural gas futures market as the NGI National Bidweek Average eased a modest 3 cents from October bidweek to $2.48, while the November futures settled at $2.764, down a stout 18.8 cents from the settle of the October contract. 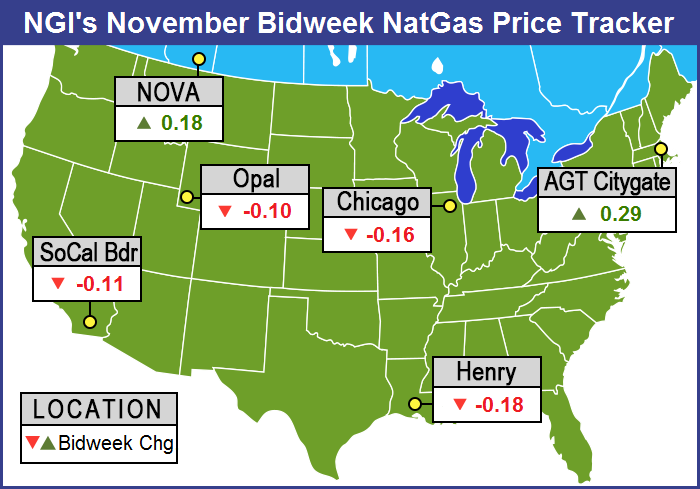 Two regions, Appalachia and the Northeast, scored hefty double-digit gains, lifting the overall average. Of the actively traded points, Transco non-New York scored the greatest gains, racking up a move of 73 cents to $1.89, while Waha was down the most, dropping 25 cents to $2.55.

Regionally, the Northeast came out on top of the leader board with an advance of 54 cents to average $2.12, and Appalachia was a distant second with a rise of 17 cents to $1.28.

While the national bidweek average and futures declines were somewhat bearish, historical comparisons allow for a bit of bullish rumblings. NGI‘s National Bidweek Average for November of $2.48 is 41 cents higher than the November 2015 average of $2.07.

November futures settled at $2.764, down 18.8 cents from the expired October contract. The December futures contract continued the slide, losing 29.3 cents during bidweek.

Traders watching the slip-sliding futures thought that the December contract at $2.80 was about as low as the market could go before a rally. “I’m trying to figure out what the bullish news is going to be,” said Alan Harry, director of trading at McNamara Options in New York.

“What I see is natural gas is really tight in the UK. They have a problem with a storage facility, it’s not because of production, and they can’t store like they usually do. They will have to float through the winter, and if they get cold weather it will shoot prices up dramatically.

“That will make traders here think there is some upside in our natural gas. I don’t think it will go up a lot, but I think December will hit $3.30 before this is over.

“The market is technically oversold and we should see a rebound coming in,” Harry said.

Bidweek traders were somewhat circumspect about their purchases. “We bought some higher, and some lower as always,” said a Michigan marketer.”We went to settlement on some.”

“These are good prices relative to where the market was recently. and it could go up and could go down, you don’t know. With this warm November not only in Michigan, but also Kentucky and other places, it’s going to be a buyers market through December. By Christmas you are buying for January and half the winter is over with.

“We are trying to figure out how we can get our volumes up. It was bad last winter, and continues to be bad this winter.”

As bidweek drew to a close Monday, physical trading of natural gas for Tuesday delivery was something of a bumpy affair, with a number of market points showing losses of about a nickel, but a few double-digit gainers in the Marcellus and Mid-Atlantic pulled the day’s average well into positive territory.

The NGI National Spot Gas Average for Tuesday delivery rose 11 cents to $2.46. Traders in Marcellus and Mid-Atlantic gas got a boost from next-day power prices, but futures traders were looking longer term and saw below average heating requirements and sold. At the close, December futures fell 7.9 cents to $3.026 and January was down 6.8 cents to $3.195. December crude oil swan-dived $1.84 to $46.86/bbl.

Futures traders were optimistic $3 would hold. “I think it will hold around the $3 area,” said a New York floor trader. “I think there are some longs right underneath the market here that are going to hold on and see if they can get another jump out of the market to see if they can cover some positions. Natural gas is doing its own thing, separate from crude oil.”

Major market centers weren’t too far behind. Gas at theChicago Citygate changed hands a penny lower at $2.56, but parcels at theHenry Hub jumped 15 cents to $2.80. Gas on El Paso Permian came in 9 cents higher at $2.49 and deliveries to theSoCal Citygate vaulted 13 cents to $2.77.

Medium-term forecasts were still coming in milder than normal. WSI Corp. in its Monday morning report said, “[Monday’s] 11-15 day forecast is a little warmer than Friday’s forecast, except for New England and Texas. CONUS GWHDDs are down one for Days 11-12 and forecast to be 70.5 for the whole period. This is still 18.7 below average. Forecast [confidence] is average as models continue to highlight a positive PNA [Pacific North American] driven pattern, and there are typical technical differences throughout the period.

“A positive PNA offers a colder risk across the southern and eastern U.S. The West and north-central U.S. could run even warmer during much of the period,” WSI said.

Consistent with the longer-term forecast, the National Weather Service predicts below-normal heating requirements in major markets for the week ending Nov. 5. New England is expected to see 115 HDD, or 25 fewer than normal, and the Mid-Atlantic is forecast to experience 90 HDD, or 36 less than its normal seasonal accumulation. The greater Midwest from Ohio to Wisconsin is anticipated to endure 65 HDD, or 75 less than its normal tally for this time of year.

Bespoke Weather Services of Harrison, NY, sees the market “significantly more tight than we did last year at this time regardless, justifying the decent price rises year-over-year, but with December contract prices trading so far above cash prices something is likely going to need to give in the next couple of weeks be it a major cash rally or further selling of the December contract.”

Those decent price rises have not gone unnoticed in the drilling and producing sector. Overall, five U.S. land-based rigs were put back in play during the week ending Friday, bringing the tally to 533 running. One rig left the offshore, making for a net U.S. gain of four to rest at 557 running (see Daily GPI,Oct. 28). Two U.S. oil rigs left, but six natural gas rigs came back. The return of five horizontals and three directionals was offset by the departure of four vertical rigs.

Thursday’s storage report saw the Energy Information Administration (EIA) report a storage injection of 73 Bcf, and futures prices stabilized. At the close the expired November contract finished at $2.764, up 3.3 cents and December had added 3.2 cents to $3.068.

Futures bulls were able to breathe a small sigh of relief as prices steadied following the release of storage figures that the industry was largely expecting. EIA reported a 73 Bcf storage injection in its 10:30 a.m. EDT release, and as soon as the numbers flashed across trading screens the expiring November futures reached a low of $2.725 but by 10:45 a.m. November was trading at $2.740 up nine-tenths of a cent from Wednesday’s settlement.

Traders noted that natural gas from the December contract onward is still a $3 market despite the price implosion of the last 6 days. “You have got $3 all the way back to March 2018, so you are in good shape in regards to $3,” said a New York floor trader.

“The 73 Bcf in net injections for last week matched the major newswire surveys and was more than the 68-Bcf date-adjusted build from a year ago,” said Tim Evans of Citi Futures Perspective. “It was still just below the 77-Bcf five-year average, although close enough to be considered neutral rather than bullish. Overall, we don’t see today’s data changing anyone’s view.”

Inventories now stand at 3,909 Bcf and are 52 Bcf greater than last year and 182 Bcf more than the five-year average. In the East Region 14 Bcf were injected and the Midwest Region saw inventories increase by 22 Bcf. Stocks in the Mountain Region rose 2 Bcf, and the Pacific Region was up 1 Bcf. The South Central Region added 34 Bcf.