After another week of turbulent swings in the natural gas market, bulls and bears appeared ready to take a breather on Friday. November Nymex gas futures still gyrated in a more than 30-cent range, but were poised to settle nearly flat on the day before a late-session sell-off ended with the contract off 11.2 cents day/day at $5.565/MMBtu. December slipped 10.7 cents to $5.710. 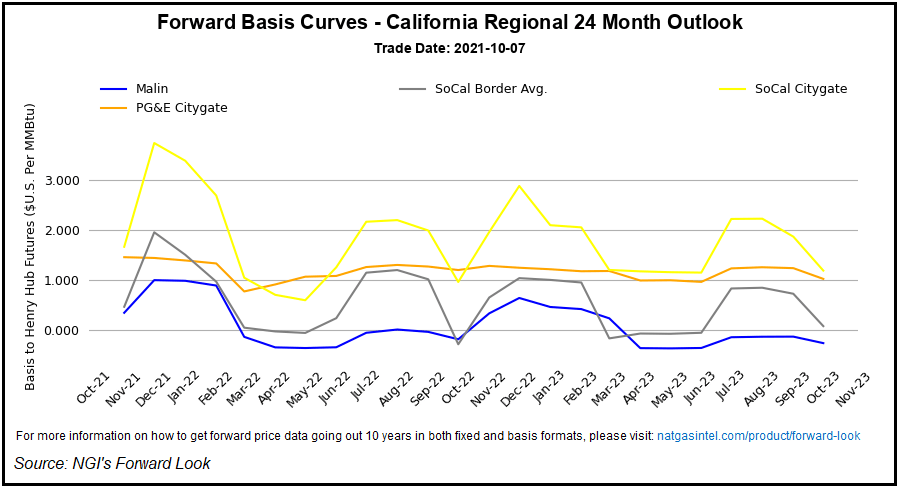 The softness in the futures and cash markets at the end of the week was a reflection of an increasingly bearish backdrop in the United States.

The fall is a time of year when temperatures are neither hot enough to generate much cooling demand or cold enough to spark any heating demand. And though some chilly weather often does begin to sneak into the forecast, weather models continue to kick the can down the road in calling for any notable drop in temperatures.

Bespoke Weather Services said given the warmth in the 15-day outlook, October is on track to rival 2016 for the lowest demand seen in any October in its historical dataset that dates back to 1980. “The only chill in the pattern over the next couple of weeks is focused out in the interior West, with the eastern half of the nation very, very warm.”

The forecaster expects the low-demand pattern to continue into late month — if not all the way into at least the start of November — because of the prevailing La Niña base state. Wind has also started to pick up after being at very low levels in recent days. This would likely impact gas power burns for the next several days.

Is U.S. Storage Sufficient For Winter?

The mild weather pattern — already with several weeks under its belt — has vastly improved the once perilous storage situation in the Lower 48.

Only one month ago analysts were calling for storage inventories at the end of October falling short of even 3.4 Tcf. After a string of larger-than-expected injections, however, estimates have crept up closer to 3.6 Tcf and higher.

The Energy Information Administration (EIA) extended that streak of stout builds, reporting on Thursday a 118 Bcf injection into inventories for the week ending Oct. 1. The print surprised to the upside, both in terms of market expectations and historical levels.

Tudor, Pickering, Holt & Co. (TPH) analysts said the 118 Bcf figure closed the gap to the five-year average to around 5%, from 6%. “The key driver of the shift week/week from an 88 Bcf build the prior week was primarily lower power generation,” the TPH team said. They noted, however, that generation cruised back above the five-year average during the Oct. 4-8 week.

TPH estimated power burns Thursday of 33 Bcf/d, versus a five-year average of 31.5 Bcf/d. Week-to-date electric generation demand is up an estimated 2 Bcf/d week/week.

The TPH analysts pointed to “a combination of seasonally weaker nuclear generation (maintenance season) and significant weakness from wind generation…while coal remains weak despite being up year/year through early October.”

Higher power generation demand and slightly lower imports from Canada should tighten the market for the next EIA print, according to TPH, with the firm’s preliminary modeling suggesting a build of around 90 Bcf.

Going forward, Bespoke said although much of the recent price action along the Nymex strip has been tied to global markets, pricing behavior may begin to change by the middle of October. That is typically the time of year the market starts focusing more on the weather pattern. The persistently mild outlook, combined with end-of-season storage levels that could wind up close to 3.7 Tcf, “and the recipe is definitely there for a decent pullback in prices,” according to the firm.

“Such a change in tone will be gradual, however, given how high prices could go if the pattern were to flip cold, a scenario which we currently view as unlikely over the next several weeks,” Bespoke said.

Of course, there is still plenty of upside risk. Despite the improving storage picture in the United States, nothing much has changed in the global supply backdrop.

Both Asia and Europe have competed feverishly throughout the summer to attract gas supplies ahead of winter. Europe, in particular, is expected to see stocks fall to a record low 78% of capacity by the end of October. Even worse, some analysts said inventories could be completely wiped out by the time spring arrives.

In recent days, there has been at least some optimism starting to surface after Russian President Vladimir Putin indicated that additional supplies could flow to Europe. But TPH analysts noted that despite the rhetoric, flows the past few days suggest little has changed.

Analysts noted that Ukrainian flows are tracking around 3.4 Bcf/d on average through early October – in line with the September average but down from an August average of 3.8 Bcf/d. Year-ago flows, meanwhile, tracked closer to 6 Bcf/d.

“Going forward, we model Russian imports into Europe ramping towards 17 Bcf/d through November-February,” TPH analysts said. This is largely accounting for the remaining room on the Ukrainian system, “which averaged around 7 Bcf/d in 4Q2020 should the Nord Stream 2 pipeline remain in gridlock.”

Regardless of capacity, TPH said Russia’s ability to flow incremental volumes appears likely to come down to end-of-season domestic storage balances, which have capped exports of late despite record domestic production.

As for demand, demand data across various countries appears to show demand destruction in play, according to TPH. October demand is up about 2 Bcf/d month/month at 29 Bcf/d, but lags its forecast of around 38 Bcf/d for October thus far.

“That said, with our aggregate forecast envisioning demand ramping more than 65 Bcf/d through December and January on normal weather, modest demand destruction is likely to do little to materially impact balances this winter – particularly if it’s cold,” TPH said.

Spot gas prices across the country continued to slide on Friday amid a mostly moderate weather outlook. Interestingly, some of the biggest drops occurred in the Rockies, where forecasters are calling for the first snow to arrive in the coming days.

AccuWeather said snow could fall by Sunday in the Cascades of Washington and Oregon. By Monday and Tuesday, a dip in the jet stream will become very pronounced across the Southwest. Much colder air combined with a stalling storm may lead to significant snowfall in parts of the West.

“A storm will blossom and produce windy conditions with snow across most of the northern Rockies,” according to AccuWeather meteorologist Rob Richards. Outside of the highest mountain peaks, temperatures are forecast to be too high for precipitation to fall as anything other than rain. However, a second cold front with much colder air behind it is to arrive on its heels.

“This will cause temperatures to fall further and set the stage for a more impressive ripple in the jet stream to usher colder conditions into the Rockies,” Richards said.

Cash traders were unfazed by the chilly forecast, sending spot gas prices much lower ahead of the weekend. Kingsgate plunged $1.800 to average $4.200 for gas delivery though Monday. Northwest Wyoming Pool was down 79.0 cents to $5.120.

Price declines throughout the country’s midsection were limited to less than 30 cents at the majority of locations. Chicago Citygate cash prices fell 24.0 cents to $5.175 for gas delivery through Monday. Farther east, Transco Zone 5 slipped only 6.5 cents to $5.600.In the Northeast, Algonquin Citygate tumbled 52.5 cents to $4.660.