A pullback in heating degree days for the end of October/early November laid the groundwork for a dramatic sell-off in natural gas futures Thursday that was further pressured by Lower 48 gas production returning to near record highs in recent days. With no surprises on the storage data front, the Nymex November gas contract went on to settle at $3.198, down 12.2 cents. 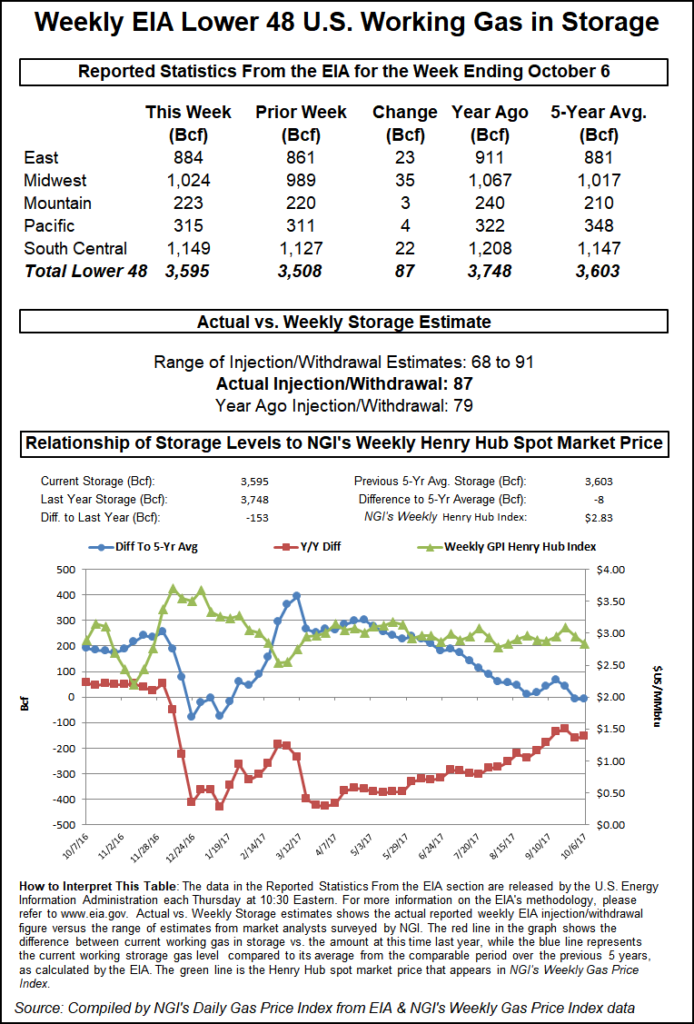 Spot gas prices were mostly lower, as a milder break was in store for much of the country beginning Friday and continuing through Saturday. The NGI National Spot Gas Avg. fell 9.5 cents to $3.175.

As for futures, prices looked set to soften at the start of trading, after early-morning weather guidance backed off the amount of cold across the United States for the Oct. 29-Nov. 2 period. The midday American model data confirmed the slightly warmer outlook, losing nearly 10 heating degree days in demand the past two runs, according to NatGasWeather.

“The weather models are struggling with the Oct. 29-Nov. 2 pattern as they try to resolve just how much colder-than-normal temperatures to expect and also which regions will be impacted greatest,” the forecaster said.

The midday European model maintained a relatively chilly bullish pattern, but certainly could back off if it catches on to what the American model is seeing. “If not, then inconsistent weather data will need to be resolved before the weekend break,” NatGasWeather said.

The American and European models continue to bounce back and forth from day to day, with ensemble members showing a range of potential outcomes within the 15-day forecast window and beyond, EBW Analytics said. “This model uncertainty adds to market volatility,” EBW CEO Andy Weissman said.

While the American model continued to call for a temporary relaxation of the Alaskan Ridge during the 15-day window, the ridge is then expected to re-strengthen. The more important question remains if a further breakdown of the ridge can be expected in the first or second week of November, bringing a sustained return of warmer-than-normal weather in the eastern half of the country, according to EBW.

“While the exact timing remains uncertain, if model runs continue to trend in this direction, a near-term peak could already be in place,” Weissman said.

Meanwhile, Thursday’s slide could also be attributed to reports that Lower 48 gas production returned to near record highs in recent days. With storage inventories lagging far behind historical levels, market players are pinning their hopes on the additional supplies refilling stocks before lasting winter cold arrives.

The EIA reported an 81 Bcf injection into storage inventories for the week ending Oct. 12, slightly below market expectations for a build in the mid-80s Bcf. The reported build was larger than both last year’s 55 Bcf injection and the five-year average build for the week of 79 Bcf.

“This number, if anything, is a touch supportive with a consensus closer to 83-84 Bcf, though well within the margin of error, especially with some production disruptions from Hurricane Michael,” Bespoke Weather Services said.

The reported injection, which was 1 Bcf above Bespoke’s estimate, confirms its reading of balance as quite loose overall, and the forecaster expects next week’s storage injection to be even looser due to lingering demand impacts from Michael.

Mobius Risk Group analysts, however, cautioned about reading too much into Thursday’s injection. “An individual weekly data point is far from a trend.”

During the next couple of weeks, the underlying supply/demand balance will likely take a back seat to the “inject-at-any-cost” environment currently being displayed at salt caverns, Mobius said. If spot prices remain as strong as they have been the past two weeks, downside risk may be limited.

Thereafter, the market will eagerly await early November production data for any signs of strong sequential growth heading into winter, the Houston-based firm said. “Here we also advise against being too focused on minutiae, and suggest a more holistic fundamental assessment of the market is needed. An overt fixation on production growth is what caused some market participants to be surprised by recent strength at the front of the Nymex curve,” analysts said.

The 81 Bcf build lifted storage inventories to 3,037 Bcf, 601 Bcf below year-ago levels and 605 Bcf below the five-year average. Broken down by region, 37 Bcf was injected in the Midwest, 23 Bcf in the South Central, 22 Bcf in the East and 2 Bcf in the Pacific. The Mountain region reported a 3 Bcf withdrawal.

The draw in Mountain supplies perplexed market participants on Enelyst — a social media platform hosted by The Desk — most of whom were expecting a build of 1-2 Bcf. Among the possible explanations for the unexpected draw were the explosion on Enbridge’s Westcoast Transmission system and an inventory drop at the Ryckman storage facility on Oct. 2, although none of those reasons supported a 3 Bcf pull from supplies, market observers said.

Before Thursday’s dramatic sell-off, the November contract (and the entire winter strip for that matter) sat at multi-year highs, at $3.32 and $3.325, respectively. The last time the November contract reached this level was in August 2015, while the winter 2018-2019 strip last breached $3.30 in September 2015, Mobius said. On Thursday, the winter strip fell to $3.22.

Spot gas prices shifted gears into reverse Thursday as a milder break between weather systems was expected across much of the country Friday into Saturday ahead of the next cold shot arriving into the northern and east-central United States Saturday through Tuesday. That system is expected to drop lows once again into the 20s and 30s, while the West is expected to see a mix of mild and warm conditions due to high pressure overhead, according to NatGasWeather.

In Texas, where temperatures are expected to remain below normal but not low enough to drive up demand, spot gas prices were mixed. Losses of more than a dime were seen in parts of East Texas, while marginal increases were seen at pricing hubs in the Permian Basin of West Texas.

The country’s midsection took on a more decisive retreat, with spot gas at the Chicago Citygate sliding more than a dime to $3.30 and Joliet tumbling 13.5 cents to $3.265. In the Midcontinent, Enable East plunged 16 cents to $2.98, while Northern Natural Demarc dropped 18 cents to $3.19.

Smaller declines were seen across the Southeast, although Transco Zone 5 fell 12.5 cents to $3.285. Appalachia prices were generally lower, with Dominion South plunging 17.5 cents to $2.895.

Part of Dominion’s steep sell-off could be due to the force majeure on the Rover Pipeline due to gas quality issues, which shut off deliveries to Vector. Since Oct. 1st, cumulative receipts on Rover have averaged 3.08 Bcf/d. Volumes fell to 2.26 Bcf/d and 2.72 Bcf/d for Oct. 17-18, respectively, to compensate for the decreased deliveries in the Market Zone, according to Genscape Inc.

The Cadiz-ORS receipt point took the largest hit, with lesser amounts at other supply points to make up the difference. Production in Ohio overall experienced a day/day drop from Oct. 16 to 17 of about 222 MMcf/d, according to Genscape’s Springrock production group estimates, due to this event. The drops may have been greater were it not for some affected production volumes rerouting to Tennessee Gas Pipeline and Texas Eastern Transmission (Tetco), Genscape natural gas analyst Vanessa Witte said.

Deliveries at the Vector-FIN interconnect were reduced to zero on Oct. 17 as of the Intraday 1 cycle, and though about 230 MMcf/d was scheduled initially for Oct. 18 through the timely cycle, that had also been revised back down to zero, Witte said.

Deliveries to ANR and Panhandle Eastern Pipeline have increased, but only by roughly 345 MMcf/d total between the two, she said. Deliveries to St. Clair on Vector have been cut about 580 MMcf/d, though Great Lakes has compensated slightly and increased deliveries to Union Gas at St. Clair by roughly 300 MMcf/d.

Meanwhile, Algonquin Citygate next-day gas plunged 71.5 cents to $3.205 as Algonquin Gas Transmission has rescheduled an outage through its Southeast compressor station on the border of New York and Connecticut for Oct. 20. This outage will reduce station capacity of 1,775 MMcf/d to 1,370 MMcf/d.

“This event will constrain the mainline, as Southeast flows have averaged 1,370 MMcf/d and maxed at 1,495 MMcf/d in the 10 days since the end of the Stony Point compressor station outage,” Genscape natural gas analyst Josh Garcia said.

What is notable about this event is that mainline capacity has been increased to its winter levels as of Oct. 7, allowing higher supply/demand balances on the pipe, Garcia said. Capacity through Stony Point has accordingly increased from 1,140 MMcf/d to 1,806 MMcf/d.

While this event should not significantly impact flows, especially as heating demand is currently forecast to be less significant than usual, this constraint could bring mild upside to Algonquin Citygate prices should more cold weather materialize, he said.

Meanwhile, Tetco announced an extension of its Marietta, PA, compressor station outage to Friday. This outage has been ongoing since Oct. 5 and was originally scheduled to be completed on Oct. 14, Genscape said.

While there was a partial restoration of service to 1,360 MMcf/d on Oct. 13, this outage will again bring compressor capacity to zero. Furthermore, capacity between Marietta and Lambertville, NJ, will again be reduced to 341 MMcf/d, affecting more than 30 citygates, power plants and interconnects that have reached an aggregate max of 709 MMcf/d during the weeks before the original outage. Lower Chanceford flows to Transco Zone 6 will not be affected, Genscape said.

Reroutes through the northern Tetco M3 line compensated for the lost gas. Before this event occurred, M3 prices increased by $1.03 day/day in anticipation of this last event, and the M3/Zone 6 spread rose to $1.84, although Atlantic Sunrise alleviated the supply constraints on the Transco side, and there will be less coinciding maintenance elsewhere on Tetco that contributed to volatility during the last outage, Garcia said.