Natural gas futures continued to strengthen at the front of the curve Wednesday as weather models moved in greater alignment regarding projected cold over the next couple of weeks. The Nymex November gas futures contract rose 1.0 cent to $2.282/MMBtu, but with chilly air seen waning after the first week of November, the December contract slipped 2.2 cents to $2.427. 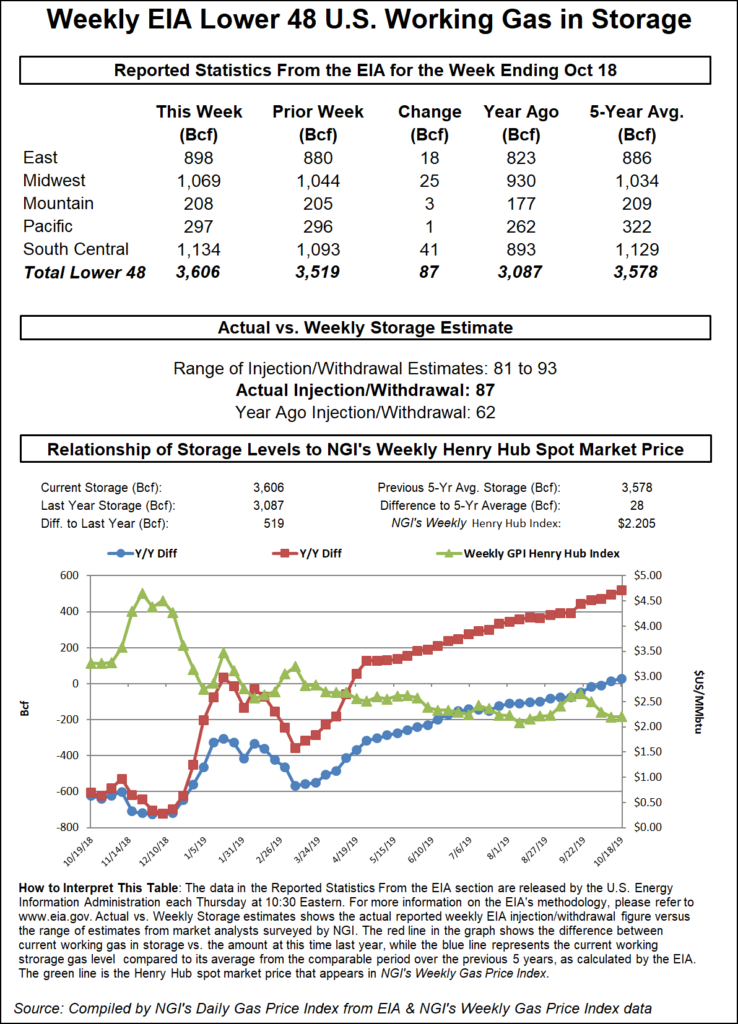 Cash prices were mostly stronger Wednesday as the second in a series of cold blasts was set to drop into the country’s midsection, sending temperatures into the South plunging. The NGI Spot Gas National Avg. rose 4.5 cents to $2.055.

The remainder of October is gearing up to be a volatile period as a line of winter storms sweeps through the United States, each one expected to be more intense than the last. Weather data overnight Tuesday was mixed, with the American Global Forecast System (GFS) model moving considerably warmer and dropping about a dozen gas-weighted degree days (GWDD) from its forecast, according to Bespoke Weather Services. The European weather model actually gained a small amount of projected demand, but given the wide discrepancy between the two models in recent days, the changes essentially put the data in greater alignment.

“There are still some key differences, however,” Bespoke chief meteorologist Brian Lovern said.

“We do favor moderation after the first week of the month,” Lovern said.

“By next Wednesday, our forecast shows demand will top the 80 Bcf/d mark for the first time this month,” Genscape senior natural gas analyst Rick Margolin said.

He pointed out that last October, this level of demand was reached by Oct. 25. Demand is then projected to rise to a peak of 86.3 Bcf/d by Nov. 1.

The timing of the coming wave of cold could be a bullish signal for the gas market, as the November Nymex contract is set to expire next Tuesday. Due to the large net short positioning, rolling over short positions would require buying the November contract into expiration, according to EBW Analytics Group.

“While continued growth in the year/year surplus is a major bearish indicator, odds remain in favor of the November contract posting a small increase into expiration.”

Last year, the EIA recorded a 62 Bcf injection for the similar week, and the five-year average build is 73 Bcf.

However, the cold weather expected next week and in early November may yield back-to-back weekly declines in the year/year storage surplus for the first time in more than eight months, according to EBW. Strong, expansive cold anomalies may even yield a withdrawal for the storage week ending Nov. 7.

Warm, sunny skies across the middle of the country will soon make way for storms as the second in a series of weather systems is set to arrive on Thursday, driving up spot gas prices in the affected regions.

A general 1-3 inches of rain is forecast to fall from central and coastal Texas and Louisiana late this week, and then northeastward to Ohio and West Virginia this weekend, according to AccuWeather. However, patches of 3- to 5-inch rainfall can occur along the Texas coast and in part of the Tennessee Valley from the storm.

“The storm is forecast to take a track west of the Appalachians in the Southern states,” AccuWeather senior meteorologist Alex Sosnowski said. “This means that while some rain will fall over northeastern Gulf and southern Atlantic coastal areas, the bulk of the rain will fall west of the mountains.”

Behind the system, overnight temperatures are expected to drop well below normal for this time of year, and cash markets responded accordingly.

NGPL TexOk jumped 12.5 cents to $2.135, and El Paso Permian climbed 6.0 cents to average 16.0 cents, with every transaction at the West Texas hub priced at zero or higher.

Gains in Louisiana and across the Southeast were capped at around 10 cents at the majority of pricing hubs, while markets farther east retreated amid pleasant conditions following major storms earlier this week.

The dry, sunny skies on the East Coast may be short-lived, however. The same storm that is expected to dump rain across the country’s midsection on Thursday is projected to move into the Northeast by late Friday.

“It is possible that the heaviest and steadiest rain passes by to the north and east of the Washington, D.C. area during Saturday evening,” Sosnowski said. “This is because the main storm will travel up west of the Appalachians and toward the Great Lakes.”

Across the country on the West Coast, California next-day gas prices were mostly lower despite a late-season heat wave blanketing the region. AccuWeather showed highs remaining in the mid-90s in Los Angeles through Friday, with strong winds causing concerns over potential wildfires.

Local utilities informed customers that preemptive power shut-offs were being considered. Sempra Energy utility San Diego Gas & Electric Co. said it may have to shut off power to nearly 24,000 of its at-risk customers.

Pacific Gas & Electric Co. (PG&E) also warned of preemptive power outages due to the adverse weather conditions and fire concerns, with nearly 185,000 customers at risk. The utility said that outages could last longer than two days.

This would be the second time this month that PG&E has preemptively shut off power due to wildfire risks, and the utility told state regulators last week that such shut-offs in high-risk wildfire areas could continue for the next decade.

The declines are likely due to the expected return to service on Southern California Gas’ (SoCalGas) critical Line 4000 on Thursday. The return of L4000 at reduced pressure following a prolonged maintenance will increase SoCalGas’ import capacity by around 270 MMcf/d day/day and by about 170 MMcf/d relative to most of 2019, according to Genscape. This change comes after months of delays due to SoCalGas discovering additional leaks when attempting to restore flows.

SoCalGas’ L235-2 was recently brought back online at reduced pressure and starting Thursday, “both lines will be available for flow at reduced pressure for the first time in over two years. The last time both of these lines were able to flow was in September 2017, before two separate unplanned incidents brought flows within the Needles/Topock Area Zone from around 800 MMcf/d to zero,” Genscape analyst Joseph Bernardi said.

Although both lines are expected to be back in service Thursday, the allowable flow is still only about half of the levels seen in early September 2017 since both lines will be operating at reduced pressure. SoCalGas’ maintenance and notice postings indicate that this flow level will continue to be in effect until an end date that is yet to be determined.

Restoring both of these lines should decrease spot price volatility going forward and ease pressure on futures basis for the winter, according to Genscape. Restrictions on the use of Aliso Canyon did not result in high or volatile prices when they were in effect on their own, starting in early 2016.

“Only when these import lines went down and Aliso was restricted did prices turn volatile and post noteworthy blowouts, starting in fall 2017,” Bernardi said.