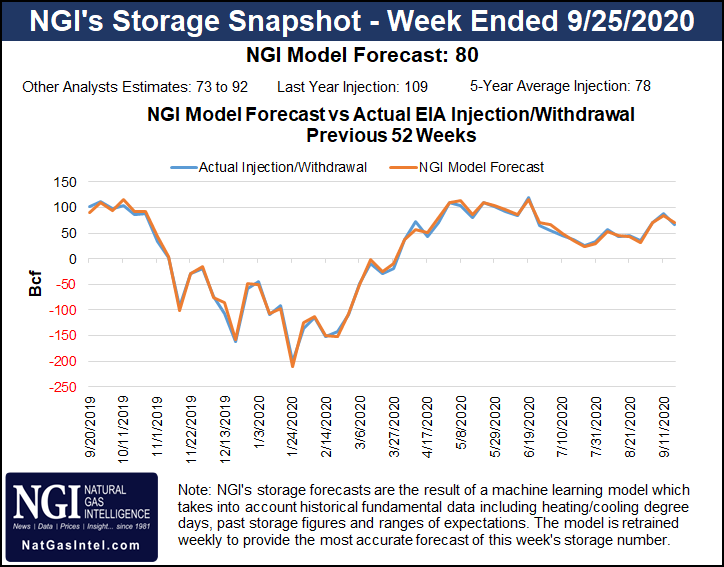 The November Nymex contract shed 3.4 cents day/day and settled at $2.527/MMBtu. The prompt month lost more than 23 cents on Tuesday.

“High storage, weak cash and weakening weather demand could make it difficult to stage a rally for a while, unless LNG is able to pick up the slack more over the next couple of weeks,” Bespoke Weather Services said.

Bespoke said forecasts continued to point to a “low demand regime” after the current week, with warm temperatures moving into the Midwest and expected to expand eastward, leaving comfortable temperatures across much of the Lower 48 and minimizing both heating and cooling demand.

Weather “right now is solidly on the bearish side of the ledger and may remain that way into late October and even into November,” Bespoke said.

The U.S. Energy Information Administration (EIA) last week reported a relatively light storage build of 66 Bcf for the week ending Sept. 18. The result was below the estimates found by major polls and compared favorably to the five-year average build of 80 Bcf.

The latest injection, however, lifted inventories to 3,680 Bcf, and with seven weeks left in the traditional storage season, an average weekly injection of 45.71 Bcf would put stockpiles on track to hit 4.0 Tcf. If the industry exceeded that level, some analysts say it could soon run out of storage.

A Wall Street Journal survey found estimates from 73 Bcf to 92 Bcf and an average of 80 Bcf. NGI estimated an injection of 80 Bcf. That compares with a 109 Bcf increase in the comparable week last year and a five-year average rise of 78 Bcf.

Energy Aspects issued a preliminary estimate for a 71 Bcf injection — an early outlier. The firm cited a series of maintenance events impacting Appalachian production during the period, expected to take about 1.1 Bcf/d of supply offline.

Energy Aspects said it modeled a 0.9 Bcf/d week/week decline in production out of Northeast Pennsylvania from maintenance at the Cove Point LNG terminal and on the Tennessee Gas Pipeline system. The remaining supply impacts stemmed from maintenance on the Leach Xpress system, the firm said.

With summer heat fading and winter chills unlikely to settle in for several weeks, markets are looking for LNG volumes to ramp up and ease containment worries. U.S. LNG exports to fuel heating needs in Asia and Europe would help soak up excess supply and address imbalance worries.

However, export demand is in part dependent on continued recovery, along with increases in commercial and industrial energy needs amid a coronavirus pandemic that continues to interrupt global economic activity. It has added a unique layer of uncertainty for LNG demand this fall and winter.

LNG feed gas for Wednesday hovered around 6 Bcf, as it had on Tuesday, well below September highs of about 8 Bcf. Volumes failed to find new momentum with the Cove Point terminal in Maryland under maintenance and the Cameron export facility in Louisiana only beginning to ramp back up after Hurricane Laura forced it offline in late August.

“Once they do return to service, we must expect some sort of bullish reaction on the news,” NatGasWeather said Wednesday. “When that occurs is difficult to know.”

Spot gas prices declined Wednesday along with the forecasts for waning weather demand and sharp drops in West Texas and California, two regions where prices proved volatile much of September. Prices jumped in both regions Tuesday only to give up gains the next day.

Heat had intensified in the West, fueling strong cooling demand in Southern California in particular, but temperatures started to come down Wednesday. “We are expecting to see temperatures gradually ease back towards seasonal norms throughout the rest of this week and this coming weekend,” Genscape said.

Elsewhere, prices in the Midwest and Midcontinent rebounded from day-earlier losses. Chicago Citygate advanced 9.0 cents to $1.445, and Enable East rose 14.5 cents to $1.415.

On the pipeline front, Genscape said from Thursday through Nov.1, Transcontinental Gas Pipe Line would conduct a series of maintenance events in Zones 1 and 2 in Texas that could affect feed gas deliveries to Corpus Christi LNG.

It “will restrict mainline flows for 13 individual days in this period, with constraints at Station 23 in Jackson County, Station 35 in Harris County, and Station 40 in Hardin County,” the firm said. “Operational capacity will be as low as 125 MMcf/d for primary firm transportation through Stations 35 and 40…on Oct. 13, 15, 29 and Nov. 3.”

“There will also be five additional days where flows could be impacted by over 160 MMcf/d: Oct. 12, 20, 22, 27 and Nov. 5,” Genscape added. “Over the last 14 days, westward implied flows through Station 40 have averaged 369 MMcf/d with a max of 461 MMcf/d. The Sinton M4669 meter is the most significant meter affected. It accounts for the majority of affected demand in Zone 1 as it supplies Corpus Christi LNG. While it is not specifically listed as a meter that will be shut in, it is the only location in Zone 1 with significant firm capacity contracted.”