Following a steep loss to start the week, natural gas futures recovered some ground Tuesday and finished ahead on the day as traders bet that recent market selloffs were overdone. This ended a two-day losing streak dating to last week. 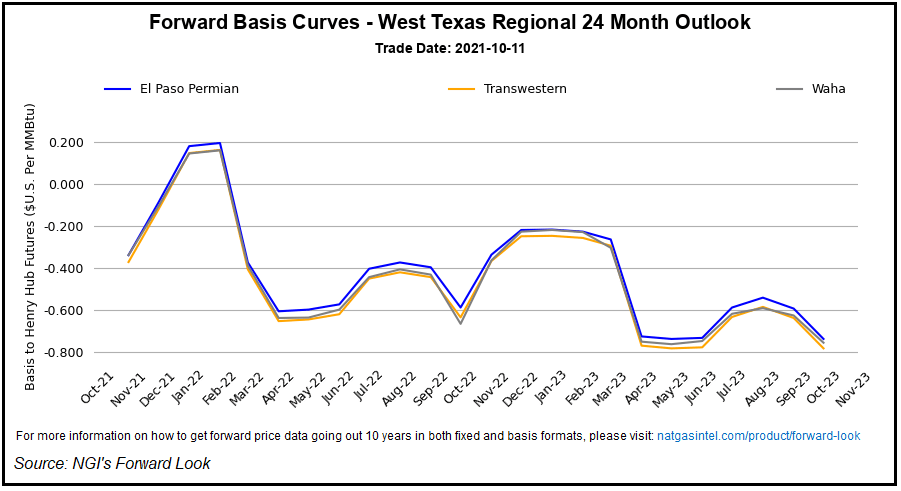 Despite some intraday volatility that pushed futures into negative territory early, the November Nymex contract, a day after dropping 22.0 cents, gained 16.0 cents on Tuesday to settle at $5.505/MMBtu. December rose 16.1 cents to $5.663.

The new momentum for futures materialized despite mild temperatures expected across most of the Lower 48 through October and signs of easing pressure on international supplies.

The European and American weather models both lost degree days overnight, with forecasts pointing to seasonally comfortable conditions over the northern United States this week and next, according to NatGasWeather. The pattern remained “solidly bearish” as each of the next 15 days was on track to deliver below-normal demand nationally, the firm said.

“We continue to look toward the end of October into the start of November for more intimidating cold shots into the northern U.S., although forecasts so far this week “failed to show any better prospects until mid-November,” NatGasWeather said.

Bespoke Weather Services echoed that outlook. The weather pattern “remains quite hostile toward bringing any cold into the U.S. for the foreseeable future, and we seem to have reached the time of year when this weather is bringing headwinds to the market,” the firm said, noting that wind generation proved strong in recent days, minimizing natural gas power burns.

“Putting it all together, as long as this weather holds, pressure on prices will continue…though we can expect some back-and-forth volatility on the way,” Bespoke said. “If our warmer ideas hold for late month into November, we likely will at least test, and ultimately break under, the $5.00 level.”

Globally, meanwhile, gas stockpiles remain light following extreme weather this year, and power demand is ramping up in China and elsewhere in Asia. These developments have fueled surges in global prices in recent weeks and added to demand for U.S. exports of liquefied natural gas (LNG), boosting Henry Hub prices at times this month.

However, the escalation of international prices has been held in check over recent trading sessions after Russian President Vladimir Putin last week issued public comments that markets interpreted as assurances of steady deliveries of gas to Europe this winter.

“Putin makes a couple of no-need-to-panic comments and gas prices head back to Earth? Not so fast,” Braziel said. “First, prices are still very high compared to historical levels. And second, nothing about the market fundamentals has changed. Again, the only thing that’s different is the market is no longer anticipating that Russia will intentionally be holding back supplies. The rest is as it was. Inventories are still low, and a gas supply crisis is only a sustained cold wave away.”

“A weather system with valley rains and mountain snows continues over the Mountain West with cool highs of 40s to 60s, lows of 20s to 40s,” generating regional demand this week, NatGasWeather said. “A second milder system will track across the Great Lakes with showers and highs of 60s and 70s.”

However, “most of the rest of the U.S. will be nice to warm this week with highs of 60s to 80s besides locally hotter 90s” in far southern reaches of the country. Looking to next week, “high pressure will rule most of the U.S. with above normal temperatures and near perfect highs of 60s to 80s. Slightly cooler exceptions are expected across the Northwest and Northeast as weather systems occasionally track through with highs of 50s and 60s.”

Against that backdrop, prices were mixed across most other regions of the country, with hubs generally posting modest gains or losses. Texas was an exception. Hubs in the Lone Star state posted varied results, but changes were notable.