Natural gas traders on Wednesday struggled with which side of the $3.00/MMBtu mark the prompt-month futures contract should roll off the board. With an uncertain weather outlook weighing heavily on the market, the November Nymex contract expired 2.3 cents lower at $2.996. December, which moves to the front of the curve on Thursday, fell 2.0 cents to $3.291. 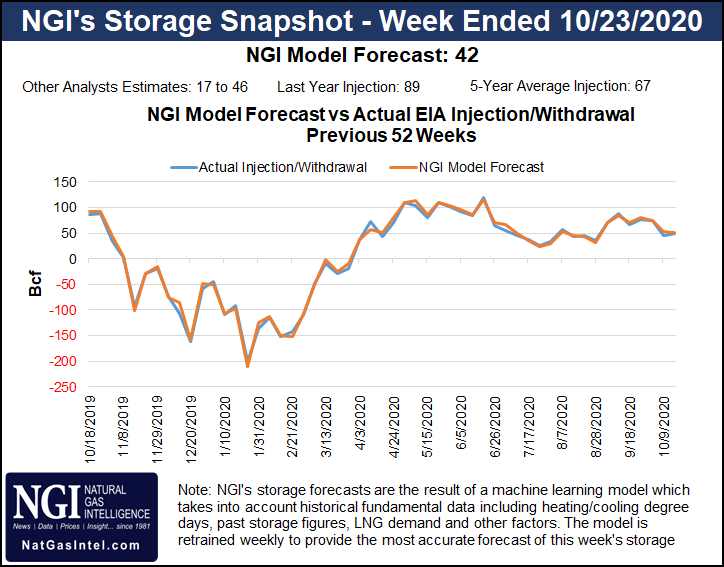 With weather becoming increasingly important given the fast approaching start of winter for the gas markets, the current cold blast was propping up demand as far south as Texas. Whether that chilly air lasts, though, is so far unclear to traders weighing an increasingly tight supply/demand balance.

Bespoke Weather Services said the morning forecast changes were mixed, but slightly colder overall. A “sneaky” trough swinging through the East early next week continued to move colder, although the warming in the wake of this feature is strong, according to the forecaster. This would lead to warmer changes in all of the eastern half of the nation in the back half of next week.

“The crucial part of the forecast remains what comes as we move toward the middle third of November,” Bespoke said.

There are signs of colder weather, which was reflected again in the midday weather models, but they are likely to be limited to the western half of the country, at least initially, according to the firm. Currently, below normal gas-weighted degree days are seen at the end of the 15-day outlook, but models are to be heavily scrutinized in case the western cold is able to spread eastward toward mid-month. “Confidence is below average for now,” Bespoke said.

Until there is more clarity on the weather front, prices are likely to remain volatile, according to EBW Analytics Group. While any milder weather may create downside pressure, a colder mid-November could spark a rally, especially since liquefied natural gas (LNG) exports could reach full capacity around the same time.

In most months, EBW said changes in LNG demand have a large role influencing the direction of the new front-month contract. The firm pointed out that declines “greased” the July contract lower, gains helped August and September higher and storm-related declines helped sink October and November.

“If the pattern holds and LNG demand rises, gains may lie in store for the December contract,” EBW said.

“Still, caution is needed” with December at a steep 29.5-cent premium to November, according to the firm. The three contracts with the largest premium before becoming the front-month ‒ July, October and November ‒ each posted losses. “A similar loss cannot be ruled out ahead.”

On the supply front, more offshore production was being shut-in as Category 2 Hurricane Zeta moved her way through the Gulf of Mexico (GOM). In the 4 p.m. CT update, the National Hurricane Center said Zeta was making landfall in southeastern Louisiana packing maximum sustained winds of 110 mph. On the forecast track, the storm was projected to make a second landfall along the Mississippi coast Wednesday evening, then move across the southeastern and eastern United States on Thursday.

The historic hurricane season has gone through every name in the list of Atlantic storm names for 2020, and Zeta is the sixth name using the Greek alphabet. Not only has the NHC moved to the Greek alphabet only once before, in 2005, but it’s also reached the sixth letter only once.

That’s made estimating storage injections this summer even more difficult, given the disruptions to both supply and demand. Ahead of Thursday’s Energy Information Administration (EIA) storage inventory report, a Bloomberg survey of six analysts showed injection estimates ranging from 17 Bcf to 39 Bcf, with a median of 37 Bcf. Reuters polled 16 analysts, whose estimates ranged from increases of 17 Bcf to 46 Bcf, with a median injection of 38 Bcf. NGI projected a 42 Bcf injection.

Last week, the EIA recorded a 49 Bcf injection that lifted U.S. stocks to 3,926 Bcf, which is 345 Bcf above year-ago levels and 327 Bcf above the five-year average.

Energy Aspects, which projected a 37 Bcf injection, noted that the first blast of cold in the Midwest was expected to boost residential/commercial demand by 4.0 Bcf/d week/week. LNG feed gas grew by 1.3 Bcf/d week/week as intake expanded at Sabine Pass and Cameron by 0.5 Bcf/d week/week each, despite both dealing with ship channel obstructions.

Market sentiment has become increasingly bullish over the past month, and with surpluses expected to decline quickly, the March/April so-called widowmaker spread has been under pressure, according to Mobius Risk Group. At 26.6 cents, this spread is not reflective of a concern that the market could have a stock out situation this winter.

“Therefore, if current weather-adjusted balances remain as tight as they are, or even at 60% of the past five weeks, the March/April spread could be off to the races,” Mobius said. “For reference, the March/April 2022 spread is substantially wider at 45 cents.”

Spot gas prices were mixed Wednesday as Zeta was projected to wreak havoc after landfall. AccuWeather said the storm may not merge with the winter-like weather system moving through the southern Plains, but the two storms would blend together enough to unleash heavy rains across the chilly Northeast.

“Rain from Zeta will spread over portions of West Virginia, Virginia, western Maryland and southwestern Pennsylvania prior to daybreak on Thursday,” said AccuWeather senior meteorologist Brett Anderson. “The rain will continue to advance northeastward at a swift pace and extend to the southern tier of New York state and southern New England during the afternoon hours on Thursday.”

Adding to the “miserable” weather, the forecaster said there would be enough of a circulation remaining from Zeta on Thursday to spawn gusty winds from Virginia to the Maryland, Delaware and New Jersey coasts. Gusts between 40 and 50 mph were possible, and sporadic power outages could materialize.

“Zeta will continue to race off to the North Atlantic Thursday night, but after that, the situation will become even more complicated,” Anderson said.

The storm sweeping eastward from the Plains and colder air plunging from the Midwest and southern Canada are expected to come into play, according to AccuWeather. The result could be a change from rain to snow over portions of northern and western Pennsylvania to portions of upstate New York and central and northern New England.

Given the burst of chilly air in store for the region, spot gas prices surged on the East Coast. In Appalachia, Tenn Zone 4 200L jumped 27.0 cents to $2.850.

On the pipeline front, Texas Eastern Transmission (aka Tetco) said Tuesday it received permission from the Pipelines and Hazardous Materials Safety Administration to return to service the 30-inch diameter system segment from Holbrook to Uniontown, both in Pennsylvania.

Genscape Inc. analyst Josh Garcia said Tetco had previously completed all geohazard work to return the segment to service, and it now has completed the final step of the installation of a new regulator facility at its Holbrook compressor. Once commissioning is complete, the pipeline is expected to take several days to raise pressure on this segment, culminating in returning Uniontown to its full capacity of 4.5 Bcf/d on Monday or Tuesday (Nov. 2-3).

Markets across the Midwest picked up a few cents at best, while Midcontinent prices were generally lower day/day.