Widening storage deficits just weeks ahead of colder weather and cuts to Canadian imports have muddled the supply picture for the winter despite record production. 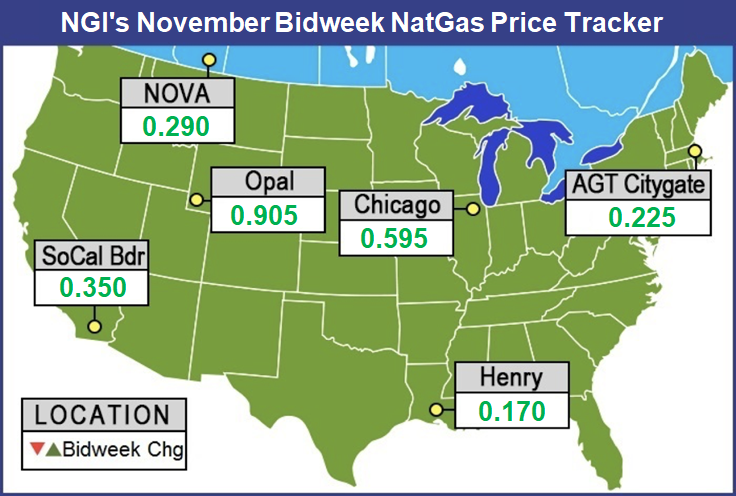 Nymex November futures rolled off the board at $3.185 but saw several days of wide swings as weather models have continued to fluctuate, offering little clarity in weather patterns beyond a week or so. The December contract, which moved into the prompt-month position on Tuesday, settled Thursday some 2.4 cents lower at $3.237 after a volatile day that saw prices hit a $3.318 high and a $3.216 low.

The latest weather guidance showed a sizable cold shot through much of Week 2, although models pulled back a bit on its intensity, instead showing a couple shots of cold that while modestly intense, would likely struggle to move into the East or pull gas-weighted degree days (GWDD) quite as much above average, according to Bespoke Weather Services.

In the near term, the forecaster said it continued to see forecasts warm and would not be surprised to see medium-range forecasts moderate as they transition into the short range, “as warmth may be able to linger longer in the East,” Bespoke chief meteorologist Jacob Meisel said.

The cold pattern looked to break down late Week 2, “although that comes after a sizable cold shot from the center of the country down into the South that slowly works east. As the pattern then gradually eases, we would look for warmth returning Week 3,” Meisel said.

While most of the weather data does show a milder pattern setting up Nov. 15-17, that could trend colder in time as the second week of November has done in the past, NatGasWeather said. “The nat gas markets have become increasingly sensitive to temperature trends, especially to the cooler side, making each suite of weather data closely scrutinized by the markets.”

With storage deficits of more than 600 Bcf at the start of the traditional withdrawal season, the forecaster said it continued to view the background state as bullish until deficits considerably improve. That didn’t happen on Thursday, and in fact deficits worsened after the Energy Information Administration (EIA) reported a 48 Bcf injection into storage inventories for the week ending Oct. 26. The build lifted inventories to 3,143 Bcf as of Oct. 26, down 623 Bcf (16.5%) from last year and 638 Bcf (16.9%) below the five-year average.

Still, the talk of the town throughout the summer has been robust production, which hit a new 86 Bcf/d high last weekend and is expected to continue growing through the remainder of the year. While storage projections for the next week may be supportive for gas prices, the year/year storage deficit has run 3.0 Bcf/d looser versus 2017 over the past four weeks, and bearish comparisons to extremely bullish year-ago temperatures around New Year’s could wipe out another significant chunk of the deficit, according to EBW Analytics.

“By mid-January — traditionally the peak of winter — it is possible that there will no longer be a meaningful year-over-year storage deficit to support the market,” EBW CEO Andy Weissman said.

Still, the possibility of a significantly colder December should not be ruled out. Models are already exhibiting “concerning uncertainty” for the back half of November, and Weather Decision Technologies has highlighted the potential for a weak-to-moderate El Niño following a cool October, warm November and cool rest-of-winter pattern, according to EBW.

A cold October can also signal a colder El Niño winter ahead, the firm said. Warming Pacific Ocean waters have also been further west, which is correlated to colder U.S. winter temperatures than if El Niño featured warming waters in the eastern Pacific.

“Should these warnings bear fruit, significant colder temperatures may result in considerable strength for Nymex natural gas futures heading into the end of the year,” Weissman said.

But with earnings season in full swing, some exploration and production companies have already indicated a possible slowdown in activity as annual budgets have been spent. “U.S. E&P companies have pretty much left their budgets for the rest of the year unchanged, which lends credence to the general message from oilfield service companies that activity could slow the rest of 2018 because of the exhaustion of capex budgets across much of the industry,” noted NGI’s Patrick Rau, director of Strategy and Research.

EQT noted its moderation of activity would delay 30 Bcfe of production into the first quarter of 2019, resulting in price realizations to improve from $2.00/MMBtu had the wells come online in early October to $2.90/MMBtu in mid-winter.

Further, firmer financial footing appears to lead to decisions to drill only if the economics dictate drilling should occur, EBW said. Cabot noted it may slow or stop drilling if it doesn’t make sense financially, and Southwestern noted its direct ownership of rigs gives them the flexibility to quickly ramp production up or down as economics suggest.

“Still, elevated oil prices and the recent runup in NGL prices has reduced the breakeven prices for new drilling to be economical,” Weissman said. Southwestern noted that in their super liquids-rich areas, assuming oil remains at $60/bbl and NGLs at $18/bbl, natural gas prices as low as $1.00/MMBtu may still be in the money. Even in liquids-rich designated areas, gas prices at $2.00/MMBtu could still make money, EBW said.

Range Resources, however, noted that even if prices soar, producers may be more likely to pay down debt and reduce leverage rather than ramp up production activities. “Whether or not this is accurate, of course, is yet to be tested,” Weissman said.

In its latest rig count report, DrillingInfo reported that as of Oct. 31, the total U.S. rig count was down eight from last week. Declines in the rig count were observed in multiple basins including the Permian (-7), Anadarko (-5), and four other plays. Small gains were only able to partially offset the declines, led by rig count increases in the Eagle Ford (+3) and the Denver-Julesburg Basin (+3).

Much like cash and forward prices during most of October, November bidweek prices in the West experienced extreme volatility as traders considered the implications of reduced Canadian imports following an explosion on Enbridge Inc.’s Westcoast Transmission.

Westcoast on Thursday announced that it had completed repairs on the section of 36-inch diameter pipeline that exploded on Oct. 9, and as a result expects that it will be able to return some additional southbound flow capacity over the next 48 hours.

The increased flows will allow up to 900 MMcf/d through both the Station 4B South and the Huntingdon constraint groups, Genscape said. Previously, this maximum capacity was 800-850 MMcf/d. Going forward, Westcoast will be inspecting its T-South system at various points along the line to ensure operating integrity.

Enbridge has stated that it expects maximum capacity for the Huntingdon constraint to increase to 1.2-1.3 Bcf/d by the end of November, as both the 36-inch line and another 30-inch parallel line would continue to operate at 80% of capacity.

Northwest Sumas November bidweek prices averaged $13.230, a nearly $11 increase month/month. Spot gas averaged above $14 just this past Monday, but then dropped to $4.41 in Wednesday trading as flows had already begun increasing through Station 4B and Huntingdon.

West Texas/southeastern New Mexico prices also put up substantial gains despite some recent maintenance-related weakness in the cash market. El Paso-Permian jumped about 50 cents to $1.705, and Waha rose a quarter to $1.450.