Bear Head LNG Corp., which is developing a liquefied natural gas (LNG) export terminal in Nova Scotia, is seeking authorization from the U.S. Department of Energy (DOE) to import and then re-export western Canadian natural gas to supply the terminal. 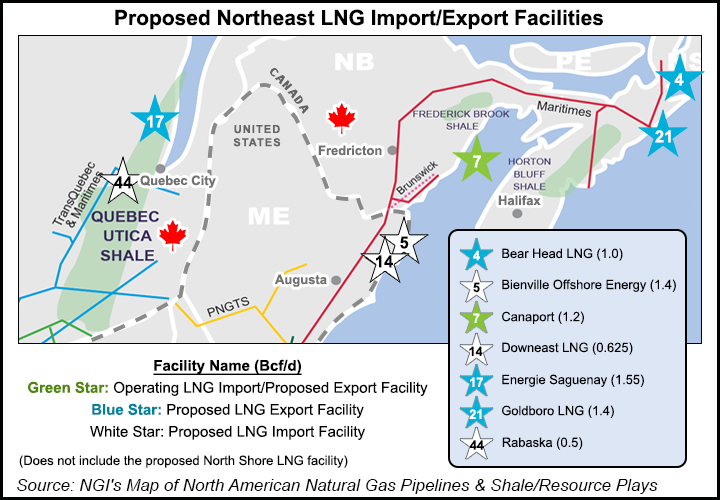 Gas “…would be imported at the various existing — or future — points at the U.S.-Canada border along the Western Canada-Northeast and Western Canada-Midwest pipeline corridors, which traditionally have linked western and central Canadian supply areas to U.S. Northeast and Midwest demand regions,” Bear Head told DOE in its recent filing.

“An ample supply of natural gas is available throughout Canada, particularly from the Western Canadian Sedimentary Basin (WCSB), and from the Mackenzie Delta, Eagle Plain and Peel Plateau in the Northern Gas Region,” Bear Head said. “Additionally, the potential exists to source gas from the Central Canadian regions of Ontario and Quebec. This supply can be sourced in large volumes in the spot market, or pursued under long-term arrangements.”

While Bear Head has said it wants to export liquefied U.S. gas — particularly that from shale plays — from its terminal, it touted the abundance of gas in Western Canada. “Even with the growth in unconventional gas production in the United States over the past decade, the WCSB still remains the second-largest producing basin, only trailing the U.S. Gulf Coast.”

Bear Head said there are more than 10 “major” points of entry where WCSB gas could enter the U.S. interstate pipeline system, many of which could carry WCSB gas to the Maritimes & Northeast Pipeline (M&NP), which would deliver gas to the terminal.