While the outlook for the North American liquefied natural gas (LNG) export business dims with every ratchet down in the price of oil and natural gas, sponsors of three proposed export terminals in Nova Scotia are convinced that when the turnaround comes, their straight shot across the Atlantic will give them an edge. 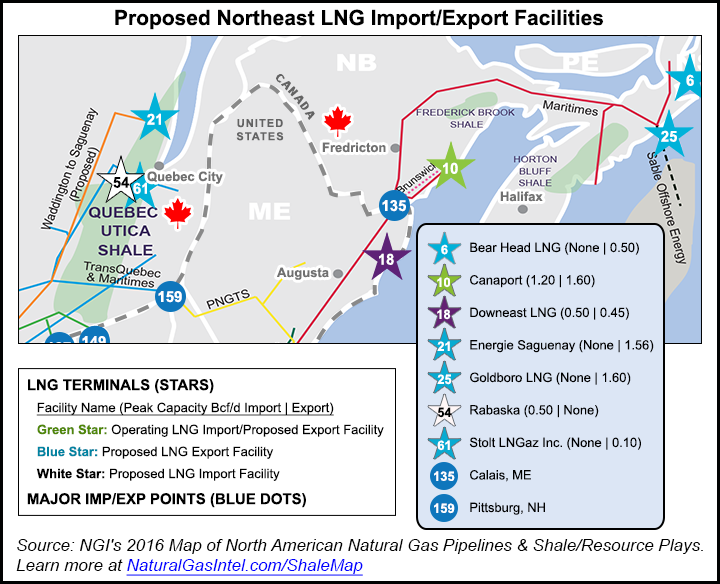 The three are planned for a rural area of Nova Scotia that is just about as far east as one can go on the North American continent.

They would have a combined capacity of more than 30 million tonnes annually and would be located near the interconnection of the Maritimes & Northeast Pipeline (M&NE) and a gas line making land from the province’s offshore.

“People view these projects as competitors, in particular in this part of the world, but I would argue they are complementary,” said Mark Brown, director of project development for Pieridae Energy. His company plans to make a final investment decision during the fourth quarter on its proposed $8.3 billion LNG export plant in Goldboro.

“There is money out there,” Brown said. Pieridae’s Goldboro project is the only one of the three Nova Scotia proposed terminals with a signed offtake agreement. It has a deal with German utility Uniper Global Commodities S.E. (formerly E.On Global Commodities SE) to ship it about five billion tonnes of liquefied natural gas annually. The agreement gives Pieridae a guaranteed purchaser for half its export capacity and would be worth about $35 billion over 20 years (see Daily GPI, Feb. 8).

According to Brown, the Uniper deal comes with $3 billion worth of German government debt financing. “What we’re looking for on the financing side is largely equity,” he said.

Pieridae and a second project, Bear Head LNG, both have received U.S. Department of Energy approval to export American natural gas to both free trade and non-free trade agreement countries.

Both projects are located on the same sites as former proposed import terminals and have inherited their environmental approvals. Bear Head is one of three projects planned by Perth, Australia, based Liquefied Natural Gas Ltd. (LNGL). The company’s two other projects, Magnolia LNG in Lake Charles, LA, and Fisherman’s Landing LNG, in Queensland, Australia, have both been signing extensions to allow the delay of final investment decisions (see Daily GPI, March 7).

“Like others in the energy industry, current weakness in energy markets and other factors, have affected LNGL’s progress in signing sufficient binding offtake to enable the projects to move at planned pace to (final investment decision), financial close and construction,” the company said in a February update.

As of January, the company had $114 million in cash. Enough, it predicts in the update, to keep funding advancement of the three projects until the end of 2018. “…We believe that within this timeframe we will conclude sufficient offtake agreements to progress one or more of our projects to (final investment decision) and financial close,” the company said.

A third project, by H-Energy, a division of Mumbai based Hiranandani Group, is proposing a 13.5 million tonne per year capacity terminal for Melford, on the Strait of Canso (see Daily GPI, Dec. 31, 2015).

According to the company, this project would tie into an import terminal, also still in the planning stages, in India. However, this project does not have export permits for either Canadian or U.S. natural gas, nor environmental approvals, supply or offtake agreements.

Why Nova Scotia? If you track the shipping lanes, sponsors point out, it’s a shorter haul from Nova Scotia, through the Suez Canal to India than it is from either the Gulf of Mexico (GOM) or from British Columbia.

“We’re not looking to compete in the trade to Asia. We’re close to Europe and closer to India through the Suez Canal, than the West Coast is…In terms of Global politics — with the North Sea declines and much of Europe’s gas being supplied by Russia — there is a desire to diversify supply,” Brown said.

But not everyone sees a rosy future for exports from the Nova Scotia coast.

The Nova Scotia projects, Adams said, will have to compete for available capital with the LNG import terminals that are currently being converted to export.

“There are a lot less costs in converting a terminal than in building a new one,” Adams said.

And there are dozens of proposed projects, both brown and greenfield, planned for the Gulf Coast and along the U.S. Northwest and British Columbia Pacific coasts.

In the West, investment has been slowing on one of the leading BC projects, Kitimat LNG, currently backed by Chevron and Australia’s Woodside Petroleum. In February, Shell also put off indefinitely a final investment decision on its 50% stake in Canada LNG — another mature terminal proposal on Canada’s West Coast (see Daily GPI, Feb. 4).

“BC has a local supply of shale gas in vast quantities. They have a lot of buy-in from aboriginal and community groups. The BC government has been very supportive,” Adams said.

“So if those guys are having trouble, that should put in perspective what the potential is for the proposed projects in Nova Scotia.”

The resources offshore the province are declining, and a lot hinges on bringing in new supplies. ExxonMobil Corp. recently announced it may start decommissioning Sable Island in 2017, and the province’s only other offshore platform, Encana’s Deep Panuke, has switched to seasonal production and had its reserves estimate severely decreased (see Daily GPI, Nov. 12, 2015).

Combined with Nova Scotia’s ban on the use of hydraulic fracturing, the province is on course to become an importer of natural gas.

Enter the M&NE pipeline, which was completed in 1999 to carry natural gas from Nova Scotia’s offshore south and west to American consumers. Now some capacity is being used to carry gas north from the increasingly productive Marcellus and Utica shale formations in the United States.

“We actually have been reversing the pipeline as needed for several years,” said Steve Rankin, M&NE director of external relations.

The company is also expanding the pipeline’s capacity to reduce bottlenecks and prepare to meet the growing demand to the north. However, those expansions couldn’t handle the demands of even one of the three LNG export terminals proposed for Nova Scotia.

Before committing to each of the expensive expansions, the pipeline company signed agreements with customers. It has heard from all three proponents of the Nova Scotia projects, Rankin said, but negotiations aren’t currently ongoing for an agreement that would lead to a further expansion of capacity.

“It’s not that we’re not interested in their business,” said Rankin. “…We have a set of existing customers on our pipeline and we have to make sure we serve them.”

If a deal was reached to expand the capacity, its installation would be three to four years from the signing of an agreement with one of the LNG terminal proponents, Rankin said.

While it does have a customer, Pieridae doesn’t yet have any supply agreements signed as it nears its self-imposed deadline for a final investment in the last quarter of this year, but Brown said they are getting close.