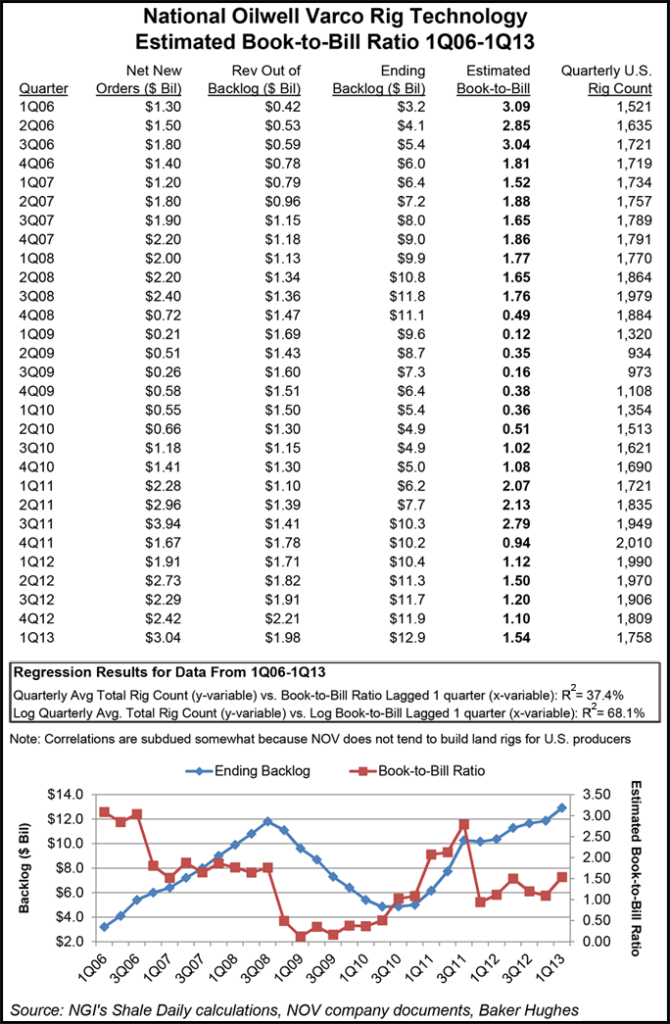 “We remain very cautious about North America and continue to see headwinds here as pricing and volume remain under pressure and as demand for pressure pumping and drilling equipment remains weak, and as operators defer expenditures,” Williams said during a conference call to discuss first quarter earnings.

All three of NOV’s operating segments reported a drop in sales from the final three months of 2012 “as U.S. rig counts drifted down another 3% sequentially and Canadian spending on consumables and production equipment declined, even in the face of seasonal increases in rig activity,” said the COO.

“North America weighed most heavily on NOV’s activity-driven businesses — petroleum services and supplies, and distribution and transmission — with 57% and 83% of sales mix coming from North America respectively.”

Falling sales for the biggest businesses proved “detrimental to the combination of price discounting and lower volumes, which diminish margins,” he said. “The rig technology segment was not immune from North America either as sales of drilling, wireline and stimulation equipment into North America remain low…”

Demand across North America is “soft,” while “pricing pressures for products and services continue to intensify,” with “gradually slowing North American rig counts, and scattered reports of falling land rig day rates,” said Williams. “Even high growth regions like the Permian and Eagle Ford are becoming more competitive as labor and assets from competitors slowly migrate into new regions.”

Operating profits for the quarter were $816 million, or 15.4% of sales. The company announced new capital equipment orders of $3.04 billion, which brings its backlog to a record $12.9 billion. Most of the orders are for the offshore, including 17 jack-up rigs and eight floating rig packages. The 1Q2013 total exceeds the record backlog in 3Q2008 by more than $1 billion.

NOV, the top U.S. provider of oilfield drilling equipment and technology, saw its operating margins in the latest period fall to 21.2% from 4Q2012’s 22.4%. Management had earlier this year said margins would be “challenged to move meaningfully,” said CFO Jeremy Thigpen.

“This shift in mix is a current drag on rig tech margins,” said Thigpen. “But we believe it to be a transient issue. Demand…will return in the U.S.” However, NOV is “sticking with our previous guidance for rig tech margins to remain…22-23% most of this year.”