More demand for oil and gas equipment has put oilfield technology expert NOV Inc. in a sweet spot for 2022, with the bitter sting of rising costs and broad supply chain issues likely to continue for some time, according to the management team. 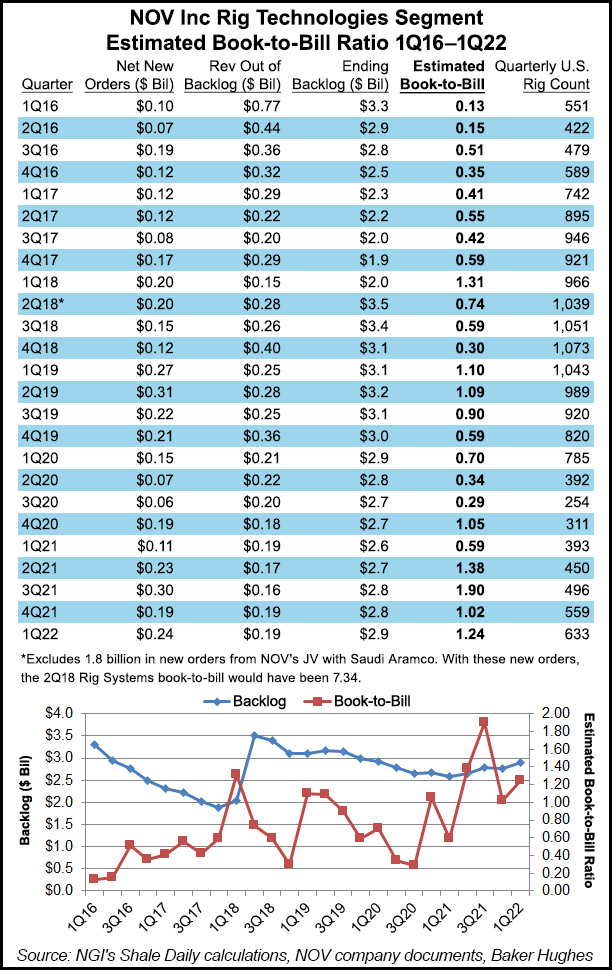 CEO Clay Williams held the microphone to discuss 1Q2022 results and the outlook going forward. He was joined by CFO Jose Bayardo.

NOV saw “positive impacts of aggressive cost reductions” and rising oil and gas demand. The positives, though, were “offset by continued inflation and supply chain disruptions,” Williams told investors. Orders were “strong across the board,” lifted in part by its emerging offshore wind business.

NOV “put up a consolidated book-to-bill of 115% in the first quarter,” Williams said. “The organization’s execution against shifting challenges in supply chain, freight and labor improved during the first quarter, in part by broadening our base of suppliers, as well as recovering escalating costs through higher pricing.”

The costs for some raw materials, including resins, are easing, he noted. “Unfortunately, our costs for a lot of components got worse during the quarter for steel forgings, polymers, fiberglass, electronics, stainless steel and switchgear, most notably.”

In addition, NOV faced more “freight challenges” in the Eastern Hemisphere, “owing to the conflict in Ukraine and continued Covid impacts…Recent standard cost rolls on many of our products moved up materially, reflecting the higher costs we face.”

Despite the hurdles, “our outlook is constructive, given the steady tightening of oilfield services capacity that is driving accelerating demand for NOV’s core oilfield products,” Williams said. “I believe this upcycle will last a while.”

During the company quarterlies, Williams often expounds on the state of the market. The latest call did not disappoint as he explained the “current predicament” facing the oil and gas world.

“Today, the world is confronting triple-digit crude prices and all-time high global natural gas prices. While this rapid shift is jarring and damaging to global economies, frankly, it should not have been entirely unexpected. For the past few years, governments and capital allocators have been playing a dangerous game with respect to energy and the global economy.”

Transitioning to lower-carbon resources is necessary for the “long-term good of the planet,” Williams noted. However, “we’ve gotten ahead of ourselves, as we’ve attempted to pivot away from fossil fuels, which are inherently reliable and energy-dense sources of power, to lower density forms of energy with intermittency issues and inferior economic profiles.”
The previous pivots to new energy sources occurred over decades. The transitions from firewood to coal, from coal to oil, and more recently, from oil to natural gas took more than a few years.

“Unfortunately, the lower-carbon energy transition today lacks a robust economic engine driving it forward,” the CEO told analysts. The levelized cost of energy, aka LCOE, has declined for many forms of renewable energy – and costs should continue to fall.

Still, “renewables are still expensive and suffer from intermittency challenges that require storage solutions that add to their all-in costs frequently not accounted for in LCOE calculations.”

Williams said he was not not questioning the need to pivot to lower carbon but rather the plan to get there.

“The de facto policy of choking off the inputs of a critical industry, not just years but decades before we have a good alternative, is very bad policy. Many will suffer as a result.”

NOV is navigating ongoing supply chain issues, but “all our businesses remain constrained by raw material shortages,” Bayardo told analysts. There are “significantly protracted, and growing, lead times for sub-assemblies, castings, forgings, electronics and motors. As a result, our throughput is constrained, and we are not fully keeping up with inflecting demand.”

To right the operations, NOV through June plans to “build additional inventory buffers to position the organization to meaningfully improve throughput, and operational results, in the second half of the year,” the CFO said.

In NOV’s Wellbore Technologies segment, revenue during the first quarter rose to $608 million, up 47% year/year and 6% from 4Q2021. Pricing gains and an improved product mix offset inflationary pressures to drive incremental margins of 41%. That resulted in a $13 million sequential improvement in gross earnings, or 16.6% of sales.

The Completion & Production Solutions (CPS) segment generated revenue of $530 million in 1Q2022, up 21% year/year but off 3% sequentially. The sequential decline was blamed on the  “continued supply chain challenges along with typical seasonal declines.”

The book-to-bill, however, was 110%, the fifth straight quarter in which CPS achieved a book-to-bill higher than one. The backlog at the end of March increased 68% from a year ago and 6% sequentially to $1.36 billion, its highest level in more than five years.

CPS bookings overall “were solid,” said Bayardo. However, “a number of our offshore customers took a step back and deferred new orders while they work with suppliers to get their arms around the unprecedented disruptions, delays and rising costs in shipyards around the world.”

Rig Technologies segment revenue was up 2% sequentially at $441 million. The tepid growth  resulted from “a growing backlog in both capital equipment and aftermarket offerings,” offset by seasonal declines and supply chain challenges, said the CFO. New orders totaled $236 million, representing a book-to-bill of 124%. Total backlog at the end of March was $2.89 billion, the highest level since 1Q2020.

“The offshore wind power installation equipment market remains a compelling near-term opportunity, and we see the potential for five to six additional vessels” being sanctioned in the next year to 18 months, Bayardo said.

NOV reported a net loss of $49 million (minus 13 cents/share) in 1Q2022, compared with year-ago losses of $114 million (minus 30 cents). One-time charges involved with ending new investments in Russia and Belarus impacted the profits. Total revenue increased to $1.5 billion from $1.2 billion. Gross revenue profit improved to 13.8% from 12.5%.