National Oilwell Varco Inc., which designs and manufactures equipment and components used in oil and natural gas drilling, laid off 6,000 more people in the first quarter and has closed or is in the process of closing 200 facilities worldwide, painful reductions to allow the Houston operator to “maintain its investment for the future,” CEO Clay Williams said Thursday. 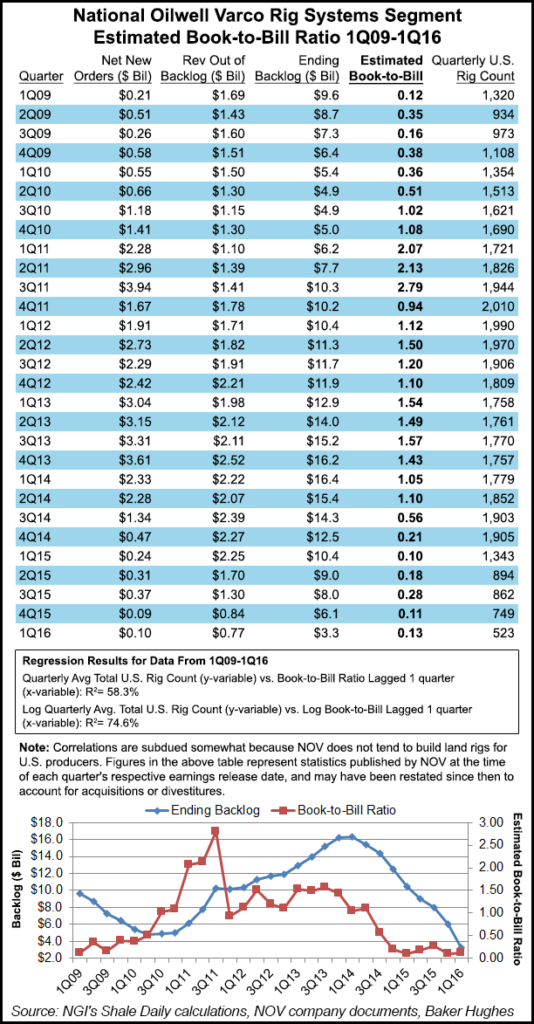 Williams didn’t sugarcoat the distress that the energy industry continues to face, but he said management is keeping its eyes on the future and the eventual upturn. In the coming “upcycle,” which is not going to be in 2016, more demand is expected for high-tech drilling tools, particularly for horizontal drilling, based on conversations with customers.

“We have a long-term strategic plan to invest…for the next upturn…and plan to provide the next generation of tools.”

The CEO spent the first 10 minutes of the conference call discussing what’s ahead, but he admitted there’s little chance for industry growth this year as commodity prices, while stable, are not high enough to move exploration and production companies to action. And while NOV is preparing for the future, the four operating segments — rig systems, rig aftermarket, wellbore technologies and completion/production systems — reported a plunge in revenue, both year/year and sequentially.

“Oil prices and oilfield activity continued to plummet during the first quarter of 2016, causing our customers to cut spending to bare minimum levels,” he said. “The fifth quarter of this extraordinary downcycle saw our revenues decline sharply once again, leading us to intensify our cost reduction efforts…Better days lie ahead. Our strong financial resources enable us to continue to invest in new technologies, products and acquisitions that better position us for the inevitable upturn.”

Williams said in discussions with customers, there is enthusiasm about new technologies on the horizon to create the digital oilfield. But there is no denying that it’s tough making a buck in today’s marketplace.

However, it’s not easy for anyone who joined the employment ranks of the industry over the last few years, he said. NOV laid off about one-fifth of its global workforce last year and restructuring continues. Seventy-five facilities were closed through 2015, but more than double that number have now been shuttered or are being closed. Williams reiterated what he had said in February, that NOV is not expecting to see business get better this year.

Rig systems generated revenue of $926 million, down 9% sequentially and 63% from a year ago. Operating profit was $119 million, or 13% of sales. The biggest impediment to the business segment was the recent bankruptcy filing by Sete Brasil Participacoes SA, Brazil’s deepwater rig manufacturer. Because of the bankruptcy, NOV removed from backlog all amounts associated with its 15 Brazilian floater contracts — $2.09 billion. It also included other orders for which NOV had not received payment in more than a year.

“Contracts with all of these customers remain in place and are enforceable,” Williams said. “If these customers provide funding to continue their projects, the company will resume construction and update the backlog accordingly.”

With the loss, the backlog for capital equipment orders in rig systems fell to $3.31 billion at the end of March. New orders during the quarter brought in $97 million, representing a book-to-bill of 13% when compared to the $770 million shipped out of backlog.

The completion/production segment also recorded an operating loss in 1Q2016 of $4 million, with revenue falling 41% year/year and 25% sequentially to $558 million. The backlog for capital equipment orders for the segment was $994 million at the end of March, up 3% from 4Q2015 but down by one-third from a year earlier. Revenue out of backlog was $330 million. New orders brought in $328 million, achieving a book-to-bill of 99%; the effect of foreign currency adjustments was $27 million.

NOV generated $621 million in cash flow from operations between January and March, with free cash flow of $363 million. The company previously announced it would reduce its quarterly dividend to 5 cents/share, which is expected to preserve around $615 million/year in future cash flow. At the end of March, it had $1.76 billion in cash and cash equivalents, and total debt of $3.38 billion, a decrease of $530 million from the end of December.