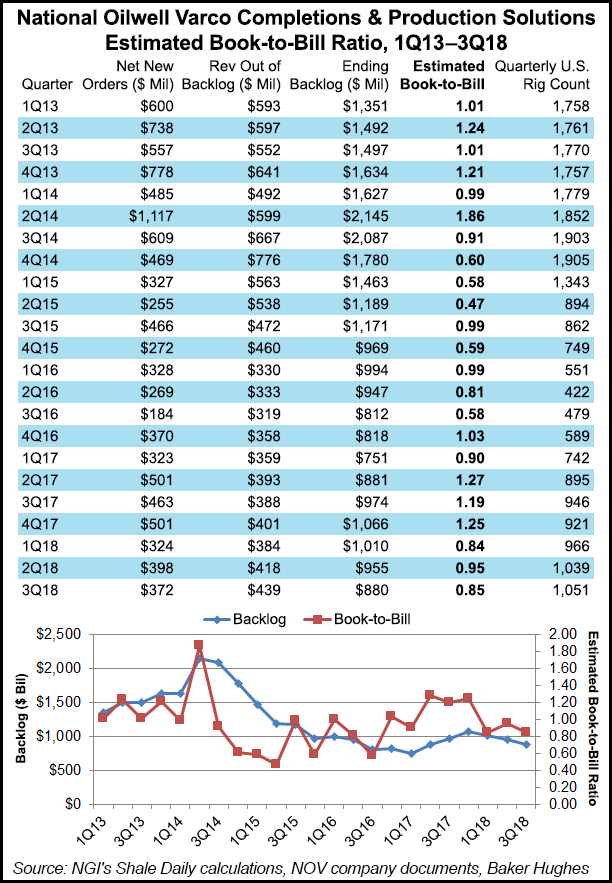 Williams and CFO Jose Bayardo during a conference call discussed third quarter results and the outlook for 2019.

The Houston operator posted consolidated sequential improvement, but “third quarter performance fell short of our expectations,” the CEO said, from a “combination of market headwinds, which arose late in the quarter in North America, a sharper than anticipated fall off of product sales in the offshore markets and a couple of sell-inflicted execution challenges, which we are focused on fixing.”

Stronger demand sequentially was reported on the international front for downhole tools, drill pipe and wellsite drilling. However the slowdown in North America well completions weighed on stimulation equipment sales. Management is betting on a turnaround next year.

“We believe the industry is poised to achieve higher levels of activity in 2019 as it works through near-term logistical challenges in North American unconventional basins, navigates end-of-year budget constraints and sanctions more offshore projects,” Williams said.

“During the third quarter we saw rising demand for conductor pipe connections, a leading indicator of future offshore wells, as well as increased inquiries around offshore rig reactivations, pointing to more offshore activity ahead.

Some of the expected revenue “will push out into the fourth quarter as deferred units are delivered, but nevertheless, we recognize that our North American customers for this equipment are facing lower dayrates and pricing,” the CEO said. “They began slowing acceptance of equipment on order and cutting expenditures to manage their cash flows over the past few weeks.”

In the wellbore technologies unit, operating leverage was limited to 4% because of higher steel and labor costs, which outpaced the segment’s price increases. Operating profit was $40 million, or 4.7% of sales.

Margins in the wellbore unit “were below expectations due to mix and inflationary forces around labor and steel,” Williams said. “We have been less successful than we anticipated at passing on higher costs as our customers are pushing back hard on price increases.”

Higher steel costs are the result of import tariffs on a variety of overseas products that were imposed earlier this year by the Trump administration; some steel used in oil and gas operations is not made in the United States.

North American customers during September slowed their deliveries for pressure pumping units and coil tubing streams, which dinged results in the completion and production (C&P) segment. Revenues fell 3% sequentially and were off 8% from a year ago to $735 million. Operating profit was $46 million, or 6.3% of sales. New orders booked totaled $372 million, representing a book-to-bill of 85% when compared to the $439 million of orders shipped from backlog. Backlog for C&P capital equipment orders at the end of September was $880 million.

In the rig technology segment, revenue fell 2% sequentially but jumped 25% from a year ago to $637 million on improving aftermarket sales and better progress on offshore projects. However, results did not fully offset lower land rig sales from inventory. Operating profit was $58 million, or 9.1% of sales.

New rig technology orders booked in 3Q2018 totaled $151 million, representing a book-to-bill of 59% when compared to the $256 million of orders shipped from backlog. At the end of September, the backlog for capital equipment orders was $3.4 billion.

“Within the North America directional drilling market, downhole tools saw increased sales with share gains in both bits and downhole drilling motors,” said Williams. “We’re seeing more operators rent motors directly from us, as opposed to relying on directional service providers to supply them. The strong performance of our motors has led to a 30% increase in power section sales year-to-date and our first half price increases appear to be holding, at least for these products.”

However, measurement-by-drilling spare sales into North America slowed in the third quarter following a solid performance in the first half of 2018. Drill pipes saw double-digit sequential revenue growth, and 58% of global drillpipe bookings were for the U.S. markets.

“Drill pipe demand still remains materially below its long-term averages,” and customer inventory is at “the lowest levels that we’ve seen since 2010,” Williams said. NOV has been able to get “selected price increases in North America for rig instrumentation services. Nevertheless, steel and labor costs are continuing to rise, eroding margin gains from price increases across many of our businesses…”

NOV secured orders for about 27,000 hp in 3Q2018 for replacement units. However, coil tubing strength sales declined because of higher steel costs. “Overall, our drilling contractor customers for North America seem to be willing to increase their spend, while pressure pumpers are retrenching hard as we enter the fourth quarter,” Williams said.

Demand “remains steady” for pressure pumping support equipment, said Bayardo. However, “U.S. customers are becoming noticeably more cautious as a result of the slowdown in completion activity in West Texas, so while we expect to ship the third quarter unit deferrals in the fourth quarter, we may see additional pushback in the fourth quarter.”

To the end of this year, “we expect to see more demand from midstream production equipment, modest improvements in our offshore operations, a pickup in 3Q2018 deferred deliveries of coil tubing and wireline equipment and higher conductor pipe sales,” the CFO said. The uptick should “roughly offset the impacts from the slowdown of completion-related activity in West Texas and raw material supply challenges in our fiberglass operations…

“While there will be near-term difficulties associated with year-end capital budget exhaustion and takeaway constraints in certain U.S. basins, we currently expect to realize a slight sequential improvement in our fourth quarter consolidated operating results, and as Clay mentioned we believe significantly improved macro fundamentals are setting the stage for a broader recovery in 2019.”