The oil and gas industry is tethered until Covid-19 is a bitter memory, but the time is now to pursue more renewable opportunities in the oilfield services sector, NOV Inc. CEO Clay Williams said Friday. 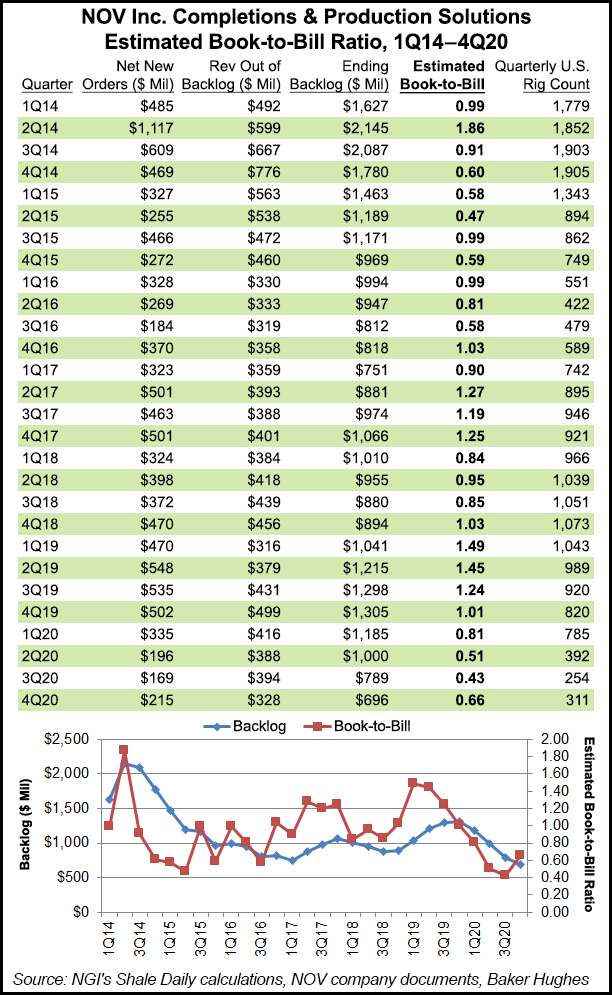 Like its peers and exploration and production (E&P) customers, the downturn will continue in the energy industry “until the world gets past the wreckage of Covid,” Williams said during a conference call to discuss fourth quarter results.

The CEO, who often shares a blunt assessment each quarter with investors, did not shy away from laying out the positives and the negatives. There were many negatives on the earnings front in the fourth quarter, “particularly disappointing in view of the massive cost cut efforts the company enacted last year and throughout the last six years,” he said.

“The couple lockdowns we faced off and on throughout 2020 continue to hinder our operations and those of our customers. Against weak demand for services, low and falling dayrates and significantly reduced cash flows, our oilfield service customers have deferred maintenance, cannibalized equipment and drawn down stocks of consumables.”

E&P customers have “cut rigs and slowed growth project approvals.” North America drilling has improved since bottoming in August, but “it is still down 58% compared to the prior year, which by the way, wasn’t exactly a robust oil and gas market either.”

That has put the industry in the hole during a “historically bad downturn,” as “equipment orders have been scarce.”

‘We Must Do More’

NOV was able to take out $700 million in fixed costs during 2020, “but our poor fourth quarter results tell us that we must do more,” the CEO said. “As we enter 2021, we have identified another $75 million in annual cost reductions that we are executing on right now and we expect the target to grow as we progress through the year.”

What NOV is not faltering on is technology, as that is where the future lies, Williams told investors. A digital platform test is underway with three E&Ps. By the end of March, it also is ramping development of a low-cost robotics rig that could be commercialized by year’s end. In addition, the electric frack, aka e-frack systems, are now being tested by a pressure pumper to help E&Ps reduce costs and emissions.

“We are seeing powerful social, political and economic momentum driving the growth of renewable energy, which will one day enable the world to transition to a net-zero carbon future,” Williams said.

“I believe that this is perhaps the greatest economic opportunity of this century. Capitalism will lead to the innovation required to reveal the most efficient solutions, and NOV intends to play a role.”

NOV has been “quietly” working for several years on an energy transition toward new sources of low-carbon energy. For the past 40 years or so, some technologies have progressed incrementally while others have seen significant growth.

“So why haven’t we transitioned to something different yet? The reason is that all are at best imperfect substitutes…at least for now…All categories except greenhouse gas emissions, solar and wind face intermittency challenges, land use issues, and not-in-my-backyard political opposition,” Wiliams told investors.

All of the fossil fuel substitutes face infrastructure hurdles. “Our approach to renewables is to look at customer pain points like these and solve them. This is the framework that we are using to think about the renewables opportunity.”

NOV is pursuing areas where it could add value including from solar, carbon capture utilization and storage, geothermal, biomass and hydrogen.

“Most of these are very early stage, years away from contributing meaningfully to our financial results, but I’m nonetheless optimistic about the potential contributions that they may one day make,” Williams said.

For today, however, the lack of project sanctioning, the “diminishment of quick-turn shale productive capacity,” along with government restrictions in the Lower 48, have led to capital evaporating for the oil and gas industry, he said.

Still, the pull back in developing oil and gas likely will lead to bullish fundamentals.

“Despite our most noble, aggressive, aspirational energy transition scenarios, petroleum remains critical to our way of life from air travel to feeding mankind. The oil and gas industry will be called upon again to grow. So there is light at the end of the Covid tunnel…

“We expect the back half of 2021 to begin to see improved demand and activity for NOV, which may well begin to grow just a little more frantic in 2022 and beyond.”

The operator, which formally changed its moniker to start the year from National Oilwell Varco Inc., had warned in January that fourth quarter results would be below guidance as stronger North American activity levels were not enough to overcome a softer international market.

In the final three months of 2020, Williams said, “rising oilfield activity and revenues in North America were not enough to offset the declines in international and offshore markets, as customers continued to defer purchases and project approvals.”

“We are optimistic that the petroleum industry will realize a meaningful recovery in the second half of the year.”

Revenue from the Wellbore Technologies segment plunged 51% year/year in 4Q2020 but was up 3% sequentially to $373 million. The ascent, as noted, was attributed to rising drilling activity levels in North America, partially offset by a fall off in international and offshore markets.

In the CPS business, generated revenue was $546 million in 4Q2020, down 32% from a year earlier and off 9% sequentially. A lower backlog and “logistical disruptions from Covid-19-related restrictions” contributed to the sequential decline.

New orders booked in CPS improved 27% sequentially to $215 million, representing a book-to-bill of 66% when compared to the $328 million of orders shipped from backlog. The backlog for capital equipment orders at the end of 2020 was $696 million.

The Rig Technologies business generated revenue of $437 million in 4Q2020, off 42% year/year and down 3% from 3Q2020. The shortfall was attributed to declining offshore drilling activity levels, which resulted in a lower capital equipment backlog. New orders booked in the final three months of 2020 totaled $190 million, representing a book-to-bill of 105% when compared to the $181 million of orders shipped from backlog. At the end of December, the backlog for capital equipment orders was $2.7 billion.

On the technology front in the Lower 48, NOV said a drilling motor used in combination with a rotary steerable system enabled it to drill the longest single-run lateral in the Marcellus Shale during 4Q2020. The customer was not disclosed.

In the Permian Basin, a coiled tubing string also set a performance record for another customer. The string completed “64 runs on 48 jobs,” reaching nearly 1.267 million running feet “before our customer retired the string, making it NOV’s most successful 2.625-inch string.”