Devon Energy Corp.’s North American onshore oil production jumped year/year 20% in 2012 as it continued to makeover its natural gas-weighted portfolio to higher margin liquids and oil targets, but more still needs to be done to squeeze the value of its portfolio, CEO John Richels said Wednesday. Oil appears to be the answer, and dry natural gas development still is off the table. 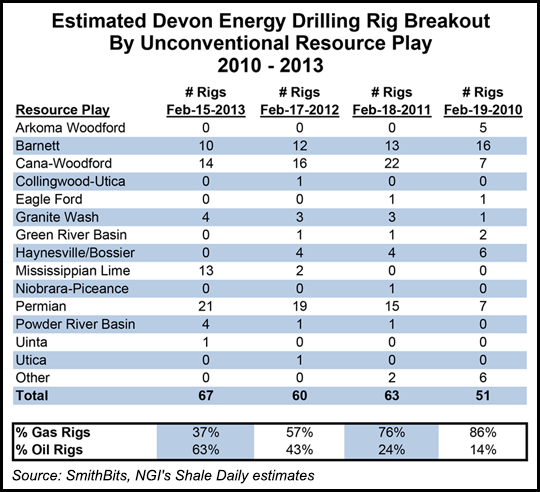 With Devon’s “aggressive transition,” liquids production had reached almost 40% of total volumes at the end of December, he told analysts during a conference call. Production from the North American asset base “climbed to an all-time record of 250 million boe…led by year/year Permian Basin oil production growth of 31%.”

The Permian cupboard is larger today with a push to develop the Permian’s Bone Spring and Delaware Basin, where the risk resource from those two plays alone more than doubled year/year. “Promising results” also were reported in the Mississippian Lime in Oklahoma, the Permian’s Wolf Camp formation and Cline Shale, and in various Rockies oil plays. In aggregate, Devon has exposure to more than one million net acres in the U.S. onshore.

In spite of the writedowns, Devon remains flush with cash with close to $7 billion on hand. Last summer Japan’s Sumitomo Corp. agreed to pay $1.4 billion for a 30% stake in 650,000 net acres in the Permian Basin’s Cline and Midland-Wolfcamp shales (see Shale Daily, Aug. 2, 2012). In early 2012 China’s Sinopec International Petroleum Exploration & Production Co. paid $2.2 billion in exchange for a one-third stake in five of Devon’s plays: the Tuscaloosa Marine and Utica shales, the Niobrara and Mississippian formations, and the Michigan Basin (see Shale Daily, Jan. 4, 2012). The joint ventures are paying for most of Devon’s drilling.

However, there’s more work to be done to squeeze value out of the portfolio, Richels told analysts.

“Anything that we do, whether we’re investing that money in our projects, whether we use it do an acquisition, whether we buy back stock, we’re going to do whatever is going to result in the most accretion and cash flow per share adjusted for debt,” said Richels. “We’ve talked a lot about that metric. We think that that ultimately is what we ought to be focused on. So nothing is off the table.”

The numbers speak for themselves. For the final three months of 2012, Devon had to write down $896 million in the value of its assets because of low gas and liquids prices. It was the second quarter in a row that Devon wrote down asset value; it took a $1.1 billion charge in 3Q2012. Net losses in the final quarter totaled $357 million (minus 89 cents/share), versus profits of $507 million ($1.25) in 4Q2011. Revenue, which showed gains from onshore liquids operations, declined slightly in 4Q2012 to $2.6 billion.

The company is banking on its oil portfolio — unconventional and conventional — to lift all boats.

“Our oil production growth in 2013 should come almost entirely from light, sweet crude in the U.S., which is expected to grow roughly 40% over 2012 levels,” said Richels. “The aggressive development of the Permian Basin will be supplemented by the early stage development of the Mississippian. On the liquids-rich side of the portfolio, we will limit drilling to only the most economic liquids-rich portions of our Barnett and Cana fields.”

This year’s activity is forecast to generate liquids output that is 10-15% higher than in 2012. The absence of dry gas drilling should cut production by 8-10%, he said.

“Given the pricing environment we’re facing in 2013, our capital program is designed to enhance capital efficiency by concentrating spending in core development regions and derisking our joint venture acreage, while significantly reducing investments related to acreage capture,” Richels said. Under that criteria, 2013 exploration and production (E&P) capital expenditures (capex) have been cut by more than 25% to $4.9-5.3 billion, which is roughly $1 billion less than the spend rate in 2012.

“Even with our reduced E&P budget for 2013, we expect to maintain drilling activity levels similar to that of last year,” he said. “This is a result of significantly higher drillbit activity on our joint venture projects, where our partners will fund most of the total well cost. In 2012, the benefit from our drilling carries amounted to approximately $400 million, and for 2013 that benefit will climb to around $1 billion.”

This year about $1 billion is to be invested in the expanding midstream business, including plant expansions in the Barnett and Cana-Woodford shales. It also wants to double the capacity of a pipeline in Canada and construct a gas processing facility in the Ferrier area of western Alberta. More infrastructure build-out is planned as well in the Mississippian and in the Permian. Total capex, including midstream spend, E&P capital, administrative and corporate expenses, now is set at $6.4-7 billion.

“On an energy equivalent boe basis, we expect production to be essentially flat versus 2012,” Richels said. “However, given the sustained divergence in the value of oil and natural gas, it’s become pretty obvious to just about everyone that the energy equivalent boe conversion rate of 6:1 has been rendered meaningless from an economic perspective. Based on the current price realizations of our oil and gas mix, a value or price equivalent is a much more meaningful way to evaluate growth in the value of a hydrocarbon stream.”