Operators large and small are pushing the envelope to extract more oil and natural gas from the rocks in the U.S. onshore, all the while keeping their eyes on reducing costs. It’s not easy, according to top executives of super independent Apache Corp. and privately held Liberty Resources. 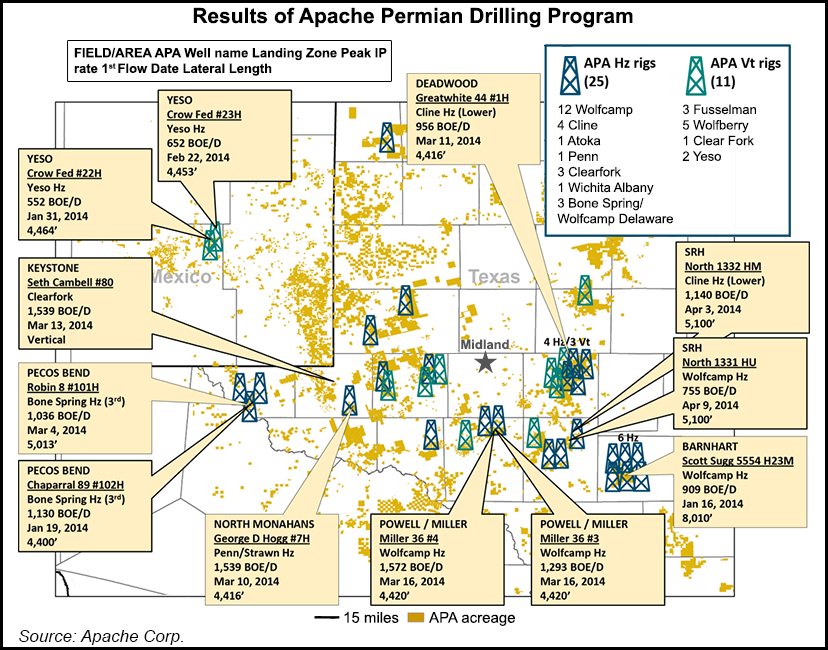 “We’ve been really trying to push technology,” Pearson said. “How much can we get out of the rock?” Pearson has been working in the oil and gas business for 30 years. Over about 20 years of his career, he said only about 15% of capital expenditures went toward completion techniques. “Today in these plays, the leading companies typically are spending 40-50%…

“In these unconventionals, we’re typically spending more on the completions and how we contact the rock than we are on drilling the ‘straw’ that allows us to get down to the formation.” In the Bakken Shale, where Liberty operates, the industry is “maybe in the first part of the third inning” in terms of how to expand production. “There’s a lot more to come in the next five to 10 years.”

Honing hydraulic fracturing (fracking) techniques has been a multi-year process for deep-pocketed Apache, which spent time trying to “tie out” completion models, Christmann said. “We never could ever get a tie” to work as well as the company wanted. “We always thought these models were great…You thought you knew what you were doing, but even on the verticals we struggled” in the Permian, where Apache is one of the biggest operators. The Houston operator also has big operations in the Bakken.

Completions aren’t as big of a struggle today, he said. Apache now is using plug-and-perforations (perf) for its fracking operations. “The big key was to get the wells down, case them in stages…Perf made a huge, huge breakthrough.”

Horizontals keep getting better, in part because of improved fracking diversion technology, Pearson said. “What really revolutionized our industry is the service industry coming up with three technology changes,” he said. The first breakthrough was the updated wireline innovations. Operators were setting plugs for wirelines in the early 1990s that had a maximum differential on a conventional well at 2,000-3,000 psi.

“The plugs that we run on wireline right now can now handle up to a 12,500 psi differential pressure to allow us to re-stage fracks to mechanically isolate other changes.” In his opinion, the third big breakthrough was the invention of sliding sleeves, which allow the driller to drop fracking balls without the need for wirelines. Many oilfield services companies now offer some sort of fluid system, including Schlumberger Ltd.’s Infinity System, which replicates traditional plug-and-perf operations, eliminating the ball seat and the frack balls (see Shale Daily,July 1).

The average number of staged fracks in the Bakken during 2009 was eight, Pearson said. In the last two years it’s averaged around 30. In recent months, it’s been 33 on average, he added. “We will see more than 40 per well in the Bakken,” as the stage counts and size of frack jobs increases.”

Technical innovations aren’t linear. What works in one play doesn’t necessarily pan out in another. “The first thing is, you have to look at all of the plays and not one size fits all,” Christmann said. He thinks the first thing that “really turned the dial” was longer laterals (lats).

“Longer lats are clearly one of the easiest things” to enhance a drilling job, said the Apache executive. At some point, however, longer laterals don’t produce more oil and gas. “Right now, we see 7,500 feet as a pretty good number” for the Permian laterals. “We’ve drilled close to 10,000 feet, but we think 7,500 is optimal now.”

Apache’s Bakken completions are rising partly because of 24-hour, seven-day-a-week operations, he added. “We now pump a 40-stage job in five days. More and more efficiencies are the big key.” With well clusters, we see more stages continue to get pumped.”

Multi-stage wells also improve the odds, Pearson said. But most important, though, is “frack intensity, to contact the rock and get the connection back to the straw…”

Apache has a huge staff of geologists and engineers looking for new ways to drill better wells. But more resources don’t guarantee instant success, Christmann said. Apache’s has “always come up with what we thought was a good solution, and that’s still the case today…” But unconventional plays are more dynamic than vertical drilling.

“Different things are going on when you look at shale plays,” and not all of the rock is worth drilling. He agreed with Pearson and said, “one thing is clear, more contact in the surface area is more critical than wellbore conductivity.” Field trials make a big difference to lay out the map on how to proceed.

Liberty has had three times as many non-operating wells as operating in the Bakken, Pearson said. “Field trials are continuing learning in the business. It’s critical to financial success and organizational success.”

With more efficiency learnings, an operator is able to “eliminate a lot of the chemistry costs,” and find infrastructure solutions before the digging begins, Christmann said.”Total stimulation of the reservoir is impacting productivity,” Pearson said. Some wells “don’t have good contact…At the end of the day, it’s the stimulation reservoir volumes, or SRV, that are connected back to the wellbore…We think it’s the SRV total to a much greater extent than to any open stages” that are fracked.

Christmann agreed, noting that many times, “all 40 stages are not equal.” In the Permian, a lot of the basin already has been vertically drilled. Horizontals now are going down with mile-and-a-half laterals, he said.

Many operators across the Permian and its sub-basins are “publishing a lot of good results…We have not been as worried about 30-day IPs [initial production rates]…The same group is looking at all the offset data…It used to be 1,000 boe/d” from the Permian wells, Christmann said. “Now we are seeing 15,000 and higher.”