Houston’s ConocoPhillips said Thursday it is taking on the epic decline in energy demand from the coronavirus by shutting in 200,000 boe/d combined in the Lower 48 and Canada, around 25% of output, and taking a knife to carve out more capital spending. 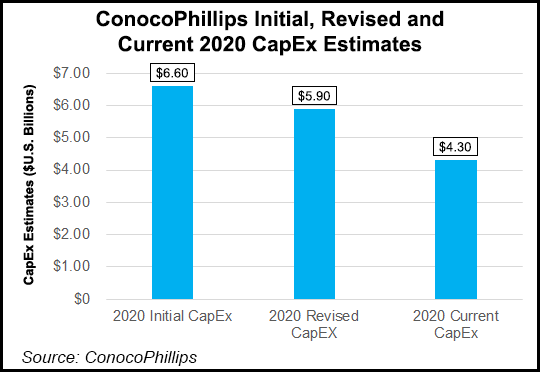 CEO Ryan Lance warned during a conference call that U.S. crude storage capacity likely will be exhausted in May. The shut-ins, which impact oil, natural gas and natural gas liquids output, are a sign of the times, he said.

“I would expect to see a lot more of this going forward,” said the CEO. “Actions are coming as there is no place to move crude, whether inland or on water as inventories reach tank top….

“We are not going to sell our crude for these kinds of prices. As the Covid-19 situation works through the situation here and globally, demand will start to return. There are better prices in the future for us.”

The actions are a reflection of management’s view “that near-term oil prices will remain weak, largely due to demand impacts from Covid-19 and continued oil oversupply.”

The Houston-based independent has chosen “not to sell at these kinds of netbacks,” Lance said. ConocoPhillips is able to hold back output in its largest producing region because of its strong financial position, something that he acknowledged is not the case for all producers.

Oil prices that were “tolerable” in March have now deteriorated to “not acceptable levels,” CFO Don Wallette said. Deeper cuts could be coming in June, he warned.

Beginning in May, production is being curtailed across the Lower 48. While executives did not provide specific figures and locations, initially, the shut-ins would impact about 125,000 boe/d gross. Curtailment decisions are to be made on a month-to-month basis, subject to operating agreements and contractual obligations.

At the Surmont oilsands project in Canada, production already has been reduced because of low Western Canada Select prices. By May, production should be down by about 100,000 b/d gross to 35,000 b/d.

In addition, all five of the U.S. hydraulic fracturing (fracking) crews are being scuttled, and additional completions work is not expected to resume this year, COO Matt Fox said during the call.

The pullback in fracking will lead to more drilled but uncompleted (DUC) wells, Fox said.

“We’re really not focusing on sustaining flat production in any particular area” but to sustaining capital on a run-rate basis, he said. “We are going with building DUCs through the remainder of the year. It gives us flexibility to ramp up production fairly quickly or complete those wells at a regular pace. We haven’t really decided yet, so the market will give us guidance.”

ConocoPhillips also does not have a “significant amount of oil above ground,” Wallette said. “We prefer to avoid the costs of transporting to a storage facility, the storage fees, transporting it back to customers…We are choosing to store oil in the reservoir instead.”

The company has pipeline commitments, “but we believe we can manage around that. We have a quite capable commercial organization to backfill volumes that we don’t flow. We don’t expect significant costs associated with those commitments.”

The 2020 guidance outlined only four weeks ago no longer applies, Lance said. In its initial response to the pandemic and price war, the company in March trimmed capital expenditures (capex) by $700 million, or around 10%, while slowing activity in the Lower 48 and deferring drilling in Alaska.

Capex, operating costs and share repurchases are being reduced overall by another $3 billion.

“In March we exercised $2.2 billion of flexibility via reductions in both our planned 2020 capital spending and share repurchases,” said Lance. “At that time, we stated we would continue to monitor the market and exercise additional flexibility, if warranted…We are well positioned with flexibility to take actions that we believe maintain our relative competitive advantages, as well as our ability to resume programs depending on the timing and path of a recovery.”

ConocoPhillips is cutting another $1.6 billion from capex, bringing the current estimate to $4.3 billion. Including the previously announced reduction of $700 million, the total reduction in operating plan capital spending is $2.3 billion, or about 35%, from initial 2020 guidance.

Operating costs have been cut by $600 million, about 10% below initial guidance, bringing the current estimate to $5.3 billion. In addition, share repurchases have been suspended.

“On a combined basis, the cumulative capital, operating cost and share repurchase actions represent a reduction in 2020 cash uses of over $5 billion versus original operating plan guidance,” management said.

“Over the past few years we worked very hard to position our company with significant flexibility across our capital, operating, distribution and balance sheet channels,” Lance said. “We entered this downturn with several competitive advantages, including a very strong balance sheet with over $14 billion of liquidity, a diverse portfolio with low capital intensity, and significant financial and operating flexibility.

“We believe this puts us in an advantaged position to take rational, economic actions, including voluntary curtailments that align with reasoned views of the market.”

Lance said the environment has changed for everyone. “The combination of Covid-19 and the oil market downturn has been difficult on industry and on stakeholders everywhere. As we manage through this unprecedented event, ConocoPhillips’ priorities are to protect the health and safety of our stakeholders, help mitigate the spread of Covid-19 and safely execute our business plans.”