European natural gas prices seesawed again Tuesday, jumping on news that leaks at a Norwegian gas field would cut more than 2 Bcf/d of supplies for the continent until they’re fixed. 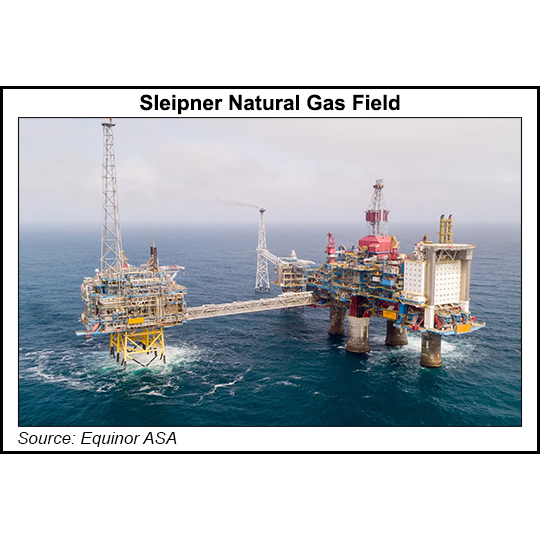 The issues are expected to be resolved quickly, but European gas markets are on edge after Russia’s Nord Stream 1 pipeline was taken offline on Monday for annual maintenance until July 21. Technical issues on the system have already cut flows by 60% on NS1. European officials have voiced concerns that Russia won’t resume gas deliveries on the system as it pushes back against Western sanctions for its war in Ukraine.

The market was again jolted early Tuesday when Equinor ASA said a gas leak related to a turbine in the offshore Sleipner field had cut some production.

No injuries were reported. Equinor said Tuesday that work continues to resume under normal operations. Unplanned outages at the Kollsnes and Nyhamna processing plants also combined Tuesday to knock out about 2.4 Bcf/d of Norwegian flows to Europe.

Both the Title Transfer Facility and National Balancing Point benchmarks shot upward and closed higher Tuesday. The move followed a sharp decline Monday after Canada said it would ship a turbine to boost capacity at a compressor station on NS1.

The system is one of the largest gas outlets serving Europe. The prospect of Russia not resuming flows on NS1, combined with an outage at the Freeport LNG terminal in Texas and hiccups in Norwegian flows, could make it difficult for the continent to refill storage ahead of winter.

Norway is Europe’s second largest gas supplier behind Russia. Overall, Norwegian pipeline exports were nominated at about 9 Bcf on Tuesday due to the unplanned outages, according to Schneider Electric.

The continent averted another crisis last week when the Norwegian government intervened to stop a labor strike that briefly interrupted some North Sea production.

European natural gas storage inventories are at about 62% of capacity, just below the five-year average but trending in line with historic averages as injections have slowed only slightly since flows on NS1 were cut to zero Monday.

The European Union has ratified a plan to fill storage inventories to 80% of capacity by October and to 90% by next winter.