Northern Oil and Gas Inc. executives said oil price volatility increased its opportunities for small “ground game” acquisitions in 4Q2018, and plans are to look for bigger prospects in the Williston Basin this year. 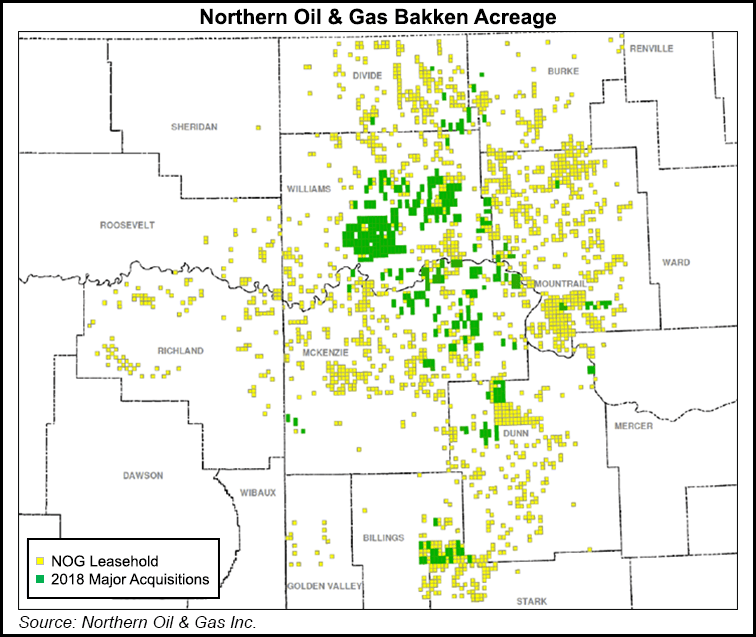 The Minnetonka, MN-based independent producer, which is focused on the Bakken Shale and Three Forks formation in North Dakota and Montana, has reduced 2019 capital expenditures by more than two-thirds year/year at the midpoint to $247-285 million, including $227-260 million on drilling and completion (D&C) and $20-25 million on acquisitions and other expenses. In 2018 capex was nearly $849 million, which includes $584 million for acquisitions and $261 million on D&C.

“Our focus is on building sufficient, sustainable cash flow to deliver returns to our shareholders regardless of commodity prices,” said CEO Brandon Elliott. “We will be patient and prudent as we continue to evaluate opportunities to grow through our ‘ground game’ and other, larger acquisitions, all while not compromising on these objectives.”

Last July, the company also agreed to acquire a package of wells producing more than 4,100 boe/d from Pivotal Petroleum Partners, a portfolio company managed by Tailwater Capital LLC. Also in July Northern announced the largest acquisition in its history, paying $100 million and trading around 56 million shares to acquire from W Energy Partners 10,600 net acres with about 6,750 boe/d of production.

The company plans to bring 28-32 net wells into production this year, with more well additions expected in the second half of the year as there were production curtailments and typical weather delays during 1Q2019. Production is expected to average 34,500-35,500 boe/d for the year.