Northern Oil and Gas Inc. agreed to spend $102 million to bolt-on prospects in the Permian Basin that cover about 2,900 net acres. 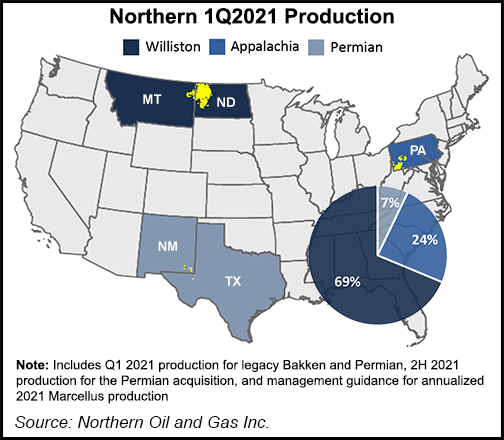 The three agreements announced Thursday are from undisclosed sellers for nonoperated assets in Reeves County, TX, and New Mexico’s Lea and Eddy counties. The assets are operated primarily by Colgate Energy LLC, ConocoPhillips, EOG Resources Inc. and Mewbourne Oil Co., according to Northern.

CEO Nick O’Grady said the transactions “achieve all of our stated goals.”

Production from the assets in May was estimated at 2,200 boe/d. Average output is forecast to be 3,700 boe/d in the second half of this year.

Northern’s stake includes about five net producing wells, five in development and an additional 23 net undrilled locations. Around $35 million is set to be spent on the combined properties this year.

Northern primarily invests in nonoperated properties with minority stakes. The independent also has leaseholds in the Bakken and Marcellus shales.