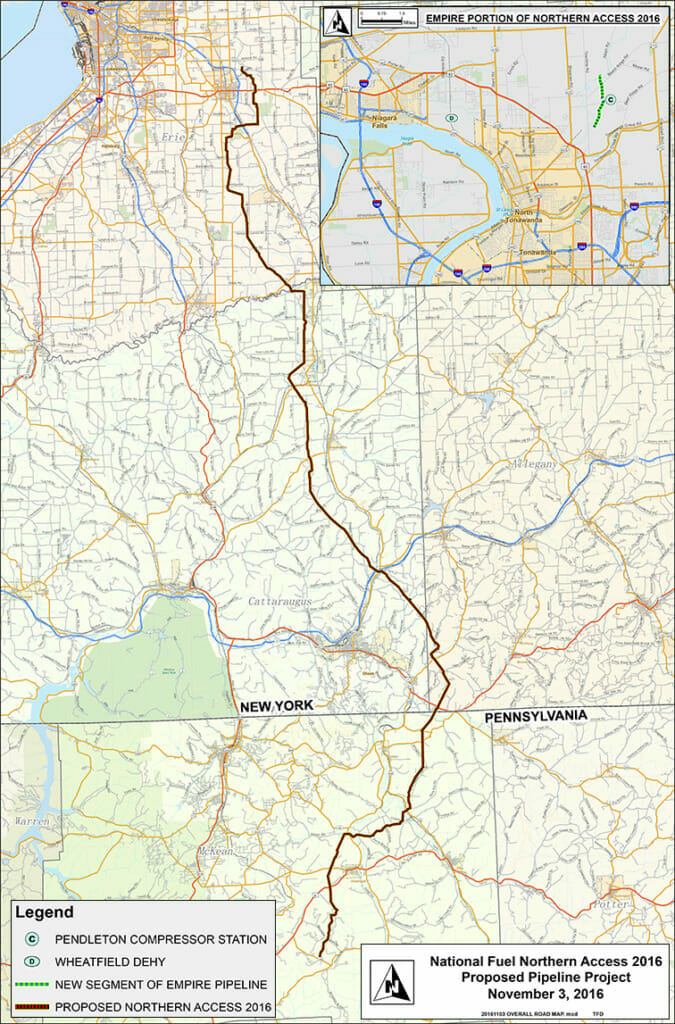 The U.S. Court of Appeals for the Second Circuit upheld an order issued by FERC in 2018 that found the New York Department of Environmental Conservation (DEC) waived its authority to issue the Section 401 WQC by failing to act within the one-year timeframe required by the U.S. Clean Water Act (CWA).

National Fuel Gas Co. (NFG), which is developing the project, embraced the court’s decision, saying “the ruling certainly clears the most significant hurdle facing the continued development of the Northern Access project.”

The 100-mile pipeline would expand the Empire and National Fuel systems to move gas from affiliate Seneca Resources Co. LLC-operated wells in northwest Pennsylvania to markets in New York, Canada, the Northeast and the Midwest. The project has approval from the Federal Energy Regulatory Commission and Pennsylvania, but it has been on hold for years awaiting a WQC as the battle with New York has continued.

The DEC received the WQC application on March 2, 2016 and later agreed with the company to extend the receipt date to April 8, 2016. The company eventually asked FERC to waive the state’s authority, suggesting the agreement was a veiled attempt to circumvent the statutory time limit.

Just before midnight on April 7, 2017 — the one-year deadline under the CWA — the DEC emailed NFG a 13-page letter denying Northern Access a WQC, noting the project’s plan to construct 71 miles of pipeline in New York failed to meet water quality standards and would negatively impact the environment.

FERC had previously ruled that the law is very clear in setting forth a one-year timeframe for WQC review. The Commission made a similar decision prior to the Northern Access case in which it waived New York’s authority over an eight-mile lateral feeding a gas-fired plant in the state.

In Northern Access’ case, the second circuit rejected New York’s claims that an application date can be modified after a mutual agreement between parties is reached to reset the clock on a WQC review. The court also rejected the state’s argument that FERC wrongfully waived its authority.

The DEC said it is reviewing the ruling and considering its options, while environmental groups indicated that they would continue to fight the project. Other hurdles also remain. For example, the project will need state permits to move ahead.

NFG spokesperson Karen Merkel said there is currently no timeline for completing the project.