It was a tale of two markets for the four-day July physical natural gas trading week that ended on Thursday. Gains in the Northeast separated themselves from the rest of the market with an overall advance of 43 cents to average $2.27, thus lifting the NGI Weekly Spot Gas Average by a dime to $2.70. Outside of the Northeast it was a different story with prices mired in a narrow trading range less than a nickel either side of unchanged. 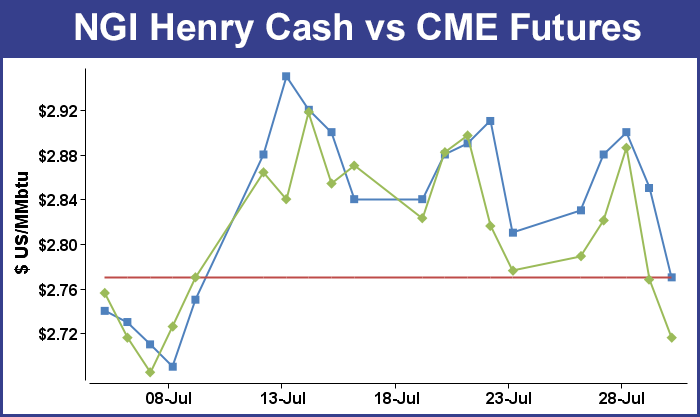 Of all actively traded locations, market points in New England proved that they could be more than just an extension of the Marcellus in times of low demand, and posted the week’s greatest gains as much of the region saw extreme heat during the week. Deliveries to Algonquin Citygate rose $1.25 to average $3.42 and gas on Tenn Zone 6 200L gained 98 cents to $3.16. Transco Zone 6 NY was also in the mix with a gain of $1.01 to average $2.95. The week’s greatest loser came out of the Rockies with Kingsgate sliding 11 cents to average $2.64.

California was unchanged at $3.04.

August futures expired Wednesday at $2.886, up 11.3 cents from the July expiration, while September futures finished trading Friday at $2.716, down 5.9 cents for the five-day trading week.

Analysts saw Friday’s screen move as “light volume book squaring ahead of the weekend in the wake of Thursday’s 3% drop,” according to Tim Evans of Citi Futures Perspective. “The temperature outlook seems little changed overall, with a bit more cooling demand for next week, but somewhat less in the week ending August 14. We continue to see the temperature forecast as consistent with near average storage injections over the next few weekly reports.”

Futures traders Thursday were left scratching their heads as the market made a counter-intuitive move lower following a government inventory report showing a lesser increase in inventories than anticipated. At the close September had shed 9.6 cents to $2.768, and October was lower by 9.1 cents to $2.797.

Evans thought the number “should be seen as constructive if not mildly supportive. There were no reclassification issues this week, and so this is a relatively clean report in that respect. We think it tends to reinforce the idea that we’ve seen enough air-conditioning demand to keep the market in a relatively close balance on a seasonally adjusted basis. This isn’t necessarily supportive, although we think it may qualify as stronger than expected, less than satisfying for those holding short positions.”

In something of a structural market change gas buyers for PJM power generation have been busy this summer even though temperatures have not hit any records. According to industry consultant Genscape, however, the PJM burn-per-degree has reached levels not seen in years. “Nominated gas burn in PJM reached a summer-, year-, and two-year-to-date high [Tuesday] amid temperatures that have been warm but by no means record hot themselves,” the firm said in a report.

“Gas nominations to power plants reached 5,742 MMcf/d yesterday in the PJM market, a level not seen during the summer strip since July 2013. However, during that period temperatures were substantially warmer, revealing this summer’s actual burn-per-degree is much higher and burn levels will set new records when/if temperatures rise. In July 2013 burn peaked at 6,428 MMcf/d during a period when population-weighted net cooling degree days neared 22 CDDs. When yesterday’s demand peak heat only 15.5 CDDs were registered. This supports a trend that has been in force since late May wherein the region’s burn levels have increased above those at the same temperature in previous years.

“Total burn this summer (from May 1) has averaged 3,839 MMcf/d, its highest since 2012, though CDDs this summer have averaged just 5.8 versus the 8.2 average from summer 2012. Lower gas prices and coal retirements have increased gas use for power generation in the market to levels rivalling and exceeding summer 2012.”

Physical gas traded Friday for weekend and Monday was soft nearly across the country as the recent heat in a number of regions was expected to dissipate. The weakness in the Northeast was also not surprising ahead of the uncertainty surrounding the Aug. 1 initiation of east-to-west flows of gas on the REX Zone 3 expansion out of the Marcellus (see Daily GPI, July 26). The overall physical market on Friday fell 11 cents to $2.54, and losses were widespread, with nary a point making it to the positive side of the trading ledger. The Northeast led the charge lower, but many points posted losses of a dime or more.