Prices for the week ended Sept. 5 for the most part were mired in a sea of red ink, with only the Northeast making it into positive territory. That was enough, however, to keep the national average at only a modest penny loss. 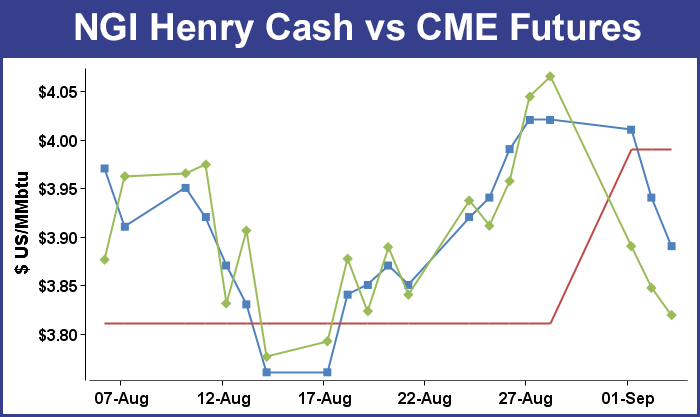 Of the actively traded individual market points, deliveries to Algonquin Citygate rose the most, adding 69 cents to $3.96 and gas at PG&E Citygate endured the greatest decline, losing 17 cents to $4.38.

Futures bulls took it on the chin to the tune of a 27.2-cent drop to $3.793 in four straight days of declines.

The always pivotal Thursday morning release of storage data was expected to show one of the leaner builds of the season, though still well above historical averages. Last year, 60 Bcf was injected, and the five-year average stands at 56 Bcf. Expectations for the 10:30 a.m. EDT Energy Information Administration (EIA) report were in the mid- to upper-70 Bcf range.

The reported injection of 79 Bcf was about 5 Bcf more than market surveys and independent analyst projections, and October futures fell to a low of $3.789 soon after the number was released and by 10:45 a.m. October was holding $3.804, down 4.3 cents from Wednesday’s settlement.

With the day’s decline, traders lamented that “we are back to the old trading range of $3.75 on the downside and $4 on the upside. We were looking for a build of 73 Bcf to 75 Bcf,” said a New York floor trader.

Traders saw the plump report as auguring more ample future supplies. “The 79 Bcf net injection was more than the consensus expectation and also bearish relative to the 56 Bcf five-year average number,” said Tim Evans of Citi Futures Perspective. “It also suggests a weakening of the background supply-demand balance, possibly related to a further increase in production, with bearish implications for the weeks to follow.”

Inventories now stand at 2,709 Bcf and are 471 Bcf less than last year and 495 Bcf below the five-year average. In the East Region 59 Bcf was injected and the West Region saw inventories up by 10 Bcf. Inventories in the Producing Region also rose by 10 Bcf.

Futures traders see prices wallowing in a range for the next two to three weeks. “I think your range is $3.65 to maybe back up to $3.95 on the top end,” said a New York floor trader. “I think we will linger around this $3.75 level for a while. There was a flush of a lot of traders who got long around $4, but if we get below $3.72 there may be a little more follow through to the downside.

Analysts don’t see an expected cool-down as having been fully discounted by the market and expect prices to work lower. “Some short-covering that is often seen on Fridays ahead of possible updates to the temperature views will be diminished given the ongoing temperature cool-down and the approach of the shoulder period,” said Jim Ritterbusch of Ritterbusch and Associates in a Friday morning note to clients. “With the temperature factor rapidly declining in importance, line of least price resistance remains heavily tilted toward the downside in our opinion. So notwithstanding this week’s price plunge that has approximated 25 cents, we still see a further reduction in value of some 20-25 cents going forward as storage injections remain elevated as a result of a near-record production pace that is being accentuated by limited supply disruption into the GOM region.

“With the temperature forecasts suggesting sharply downsized [electric generation] demand when looking out over the next couple of weeks as well as the next two months, strong output rates will become increasingly transparent and could prompt some triple-digit storage increases beyond next week. We look for next Thursday’s report to be downsized as a result of hot temperatures in recent days that have spread across key consuming regions. However, the main focus will likely be on storage guidance to be issued during the second half of this month when some huge injections may still need to be priced in.”

Randy Ollenberger, an analyst with BMO Nesbitt Burns, said, “Storage injections will need to average roughly 121 Bcf per week over the balance of the injection season to refill U.S. storage levels to the five-year average of 3.8 Tcf, which is clearly unlikely. However, the market is plainly comfortable with anticipated storage levels of 3.4-3.5 Tcf by the start of the winter heating season given the continued growth in the Marcellus and associated gas. Winter weather will now be the key determinant of prices over the next six months.”

In Friday’s trading prices for weekend and Monday delivery cartwheeled lower with losses of a dime or more common at many points. Futures made it four straight declines for the week, and October fell 2.6 cents to $3.793. November dropped 2.2 cents to $3.847.

Prices across the Eastern Seaboard had the trajectory of a safe falling from a 10-story building, with some points dropping $1 or more. Saturday temperature readings were still expected to be in the 90s, but by Monday forecast highs were seen at or below normal. Forecaster Wunderground.com predicted that Boston’s Friday high of 88 would hold through Saturday before dropping to 72 on Monday. The normal early September high in Boston is 76. New York City’s 84 high on Friday was seen reaching a toasty 92 Saturday before plunging to 77 Monday. The seasonal high in New York is 79. Philadelphia’s 91 high on Friday was forecast to reach 92 Saturday before sliding to 79 by Monday. The normal high in Philadelphia is 78.

Power loads were seen lower. The New York ISO forecast that Friday’s peak load of 27,462 MW would fall to 23,748 MW Saturday, but by Monday peak loads were expected to reach only 21,970 MW.

According to IntercontinentalExchange, Monday peak power at the PJM West terminal fell $13.45 to $37.37/MWh.

Weekend and Monday gas at Great Lakes and Midwest points fell as analysts estimated a decline in demand by as much as 0.5 Bcf/d. “Historically, Chicago cash prices strengthen from August to September, but that run will be delayed next week as Midwest demand will pare back starting [Friday],” said industry consultant Genscape in a report.

“Following a week where temperatures in the region reached the upper 80s — as much as 8 degrees F above normal — a cold front moving in from Canada will create unseasonably cool temperatures by Sunday. Accuweather forecasts Chicago highs next week will barely crest 70 degrees versus seasonal norm of 78 degrees. Those temperatures will likely push regional demand lower by roughly 0.5 Bcf/d from current levels of 8.2 Bcf/d to around 7.6 Bcf/d. So far this month, Chicago cash price has traded at parity with Henry Hub. Last year September-to-date basis averaged $0.12 and averaged $0.06 during the prior three years. During the past three years, Chicago basis in September averages roughly 13% higher than August,” the firm said.

Declines were seen from coast to coast. Gas at Northern Natural Ventura dropped 6 cents to $3.78, and on CIG Mainline weekend and Monday packages fell 8 cents to $3.57. Gas at the PG&E Citygates changed hands 2 cents lower at $4.32.

Further downside may just get realized as Joe Bastardi, meteorologist at WeatherBELL Analytics, has “high” confidence of a cool-down in the midsection of the country over the next two weeks. That said, cooling requirements are expected to be only normal. WeatherBELL calculates that cooling degree days (CDD) for the next 15 days nationwide will tally 100.4, well below last year’s 130.2 CDD but about right in line with 30-year averages of 104.3 CDD.

In his Friday morning 20-day Energy Outlook, Bastardi said, “The ECMWF [European model] weeklies are very cool starting Monday centered over the nation’s midsection, with less cool toward the West Coast and East Coast. The axis of the cool is right down the Mississippi Valley, and this contradicts what I think September will look like overall as I expect this cool shot to even out and even reverse the very warm start in the South and East. We should go back to where we were for the end of the month to rally the temperatures.”