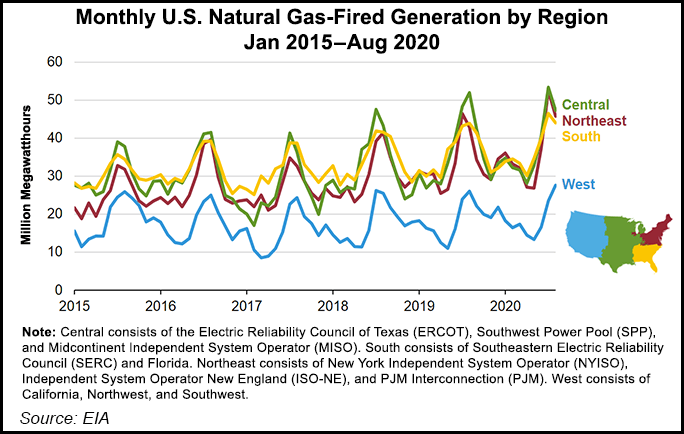 The largest percentage increases occurred in the Northeast and Central regions because of their proximity to the Appalachian production area, including from Ohio, Pennsylvania and West Virginia.

Low-priced gas from the Marcellus and Utica shales “have made it more economical to generate electricity using natural gas instead of coal,” EIA said.

That trend has been most pronounced in regions with competition between coal and gas generators, especially in the power grids overseen by the Midcontinent Independent System Operator in the Central region and the PJM Interconnection in the Northeast, EIA added.

Gas-fired generation in the West declined by 1% from 2015 to 2019, as a drop in California of 30 million MWh, or 29%, offset a combined growth of 28 million MWh in the northwestern and southwestern portions of the West, the EIA team said.

Gas-fired net summer generation capacity increased by 35 GW, or 11%, from 2015 to 2019 to meet the increased demand, EIA said, citing its latest Electric Power Annual Report. Most of the new capacity was added in the Northeast, particularly in the PJM Interconnection system.

EIA said in its most recent Short-Term Energy Outlook that gas demand for power generation will decline next year with expected higher gas prices. Overall U.S. gas consumption is expected to drop to an average of 79.4 Bcf/d in 2021, 5% less than the 2020 average, the agency said.