It was a tale of two bidweek markets for September: the Northeast and everyone else. The NGI September Bidweek National Average gained by a somewhat mediocre 4 cents to $3.50 over August Bidweek. But excluding a few points in California, double-digit gains were recorded at most all points outside the Northeast. 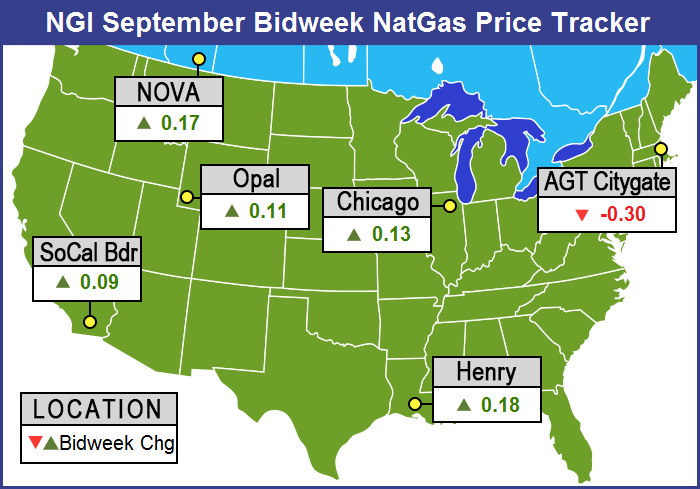 Northeastern points saw significant declines at almost every point, ranging from 12 cents to 55 cents. Midcontinent and South Louisiana pricing points showed the greatest gains for bidweek, with most points coming in at least 15 cents over August.

Of the actively traded individual points, Oklahoma Gas Transmission was the greatest gainer, adding 23 cents to average $3.72, and Transco Zone 6 NY came in as September’s biggest loser by dropping 55 cents to average $2.21.

All points in the Rocky Mountain region tacked on between a dime and 16 cents, while Midwest points rose a few cents less on average. California locations added between 6 cents and a dime.

September futures mirrored the gains of non-Northeast points and expired at $3.957 — up 14.9 cents from the settlement of the August contract — as summer’s heat took hold late in the month.

The slack Northeast bidweek pricing came as the region enjoyed a decidedly cooler temperature regime, close to 30% below historical averages at some population centers. According to figures from AccuWeather.com, Boston accumulated 188 cooling degree days (CDD) during August, well below its average of 228, and Hartford, CT, saw just 175 CDD, significantly less than its normal tally of 242 CDD. Albany, NY, enjoyed 147 CDD, well off its normal pace of 178 CDD.

When September futures trading came to a close last Wednesday, some had already stepped up to the plate and were not waiting to go to the close to do their basis deals. “I think we did OK in our bidweek trading, but we didn’t wait to go to the close and triggered some deals early,” said a Michigan marketer. “We took 11 1/2 cents and 14 1/2 cent basis on Consumers and 13 1/2 cents on Michcon.”

The marketer was mulling the idea of locking up January-March volumes as well as baseload September and was thinking “the weather forecasts are not too definitive, and we don’t want to go through what we did last year. We never do 100%, but some of our customers are open to the idea of pricing January-March. We are looking at having all our customers at their full storage allotment by the end of October,” he said.

Natural gas futures rose following the Thursday news of a 75 Bcf injection for the week ended Aug. 22. Prior to the release of the data, analysts were looking for a build of approximately 78 Bcf. A Reuters survey of 24 traders and analysts revealed an average increase of 78 Bcf with a range of 72-83 Bcf. IAF Advisors was looking for a build of 80 Bcf, and Bentek Energy’s flow model anticipated an injection of 76 Bcf.

“We had heard from 78 Bcf to 80 Bcf or thereabouts, and I think the market will hold $4 initially, but I don’t think the market has a lot of strong support [above $4] at all,” said a New York floor trader. “If we settle above $4, that might have some significance, but if we trade back down then we are looking at a trading range of $3.75 to $4.25.”

Phillip Golden, director of risk and product management at EMEX, said the storage report was “relatively flat” versus market expectations of 76-80 BCF. “The market is up slightly, continuing [Wednesday’s] trend and suggesting that weather, rather than the storage report, is moving the energy market right now,” he said. “Due to recent movements in the market, the balance of calendar year 2014 is now at the high end of the EMEX’s expectations. However, as previously stated, EMEX believes there will be buying opportunities for consumers in the next six weeks, and businesses should be prepared to capture these dips in energy prices before winter arrives.”

While noting that 2014 remains the strongest injection season in the past six years, Golden added that injections going forward could fall off the record refill pace, thanks in large part to the recent heat wave striking much of the country. “With what appears to be a late-onset summer, the potential for injection numbers to remain flat or decline slightly week-over-week exists and would be contrary to historical norms,” he said.

Inventories now stand at 2,630 Bcf and are 490 Bcf less than last year and 518 Bcf below the five-year average. In the East Region 61 Bcf was injected, and the West Region saw inventories up by 9 Bcf. Inventories in the Producing Region rose by 5 Bcf.

As bidweek trading came to a close Friday ahead of the Labor Day holiday weekend, analysts sensed that the futures market was capable of testing Thursday’s highs ($4.10) in the near term. “[T]he market’s ability to post highest levels since July 17th improved the chart picture with the bullish momentum of the past couple of weeks capable of a re-visit by October futures to [Thursday’s] highs of $4.10,” said Jim Ritterbusch of Ritterbusch and Associates in closing comments Thursday to clients.

“A renewed burst of strength could also develop off of continued warm temperature views that are now extending beyond the first third of next month,” he said. “While we have emphasized that hot temperatures in September tend to pack limited pricing punch, a significant downsizing in storage injections on Sept. 11th will still be a force with which to be reckoned. With today’s data, the supply deficit against five-year average levels has shrunk to 16.5% from a shortfall of around 50% that existed at around the end of last winter. Despite next week’s expected warm-up, we still look for average weekly deficit contraction of about 1% that would keep storage on track to approach the 3.6 Tcf level by early November. Much of our forecast remains predicated on a continued quiet hurricane season that will accommodate production at or near record levels.

“Overall, we have shifted from a short-term neutral posture to a bearish stance as we suggest holding any short October positions established at around the $4.04 area [Thursday]. We are advising stop protection above $4.20. But at the same time, we also suggest holding deferred bull spreads employing the December 2014 contract as long leg against spring 2015 contracts.”

Other traders favored the buy side. Tim Evans of Citi Futures Perspective suggested working a buy order on the October contract at $3.68 with stop-loss protections at $3.48 should the order get filled.

In physical trading Friday for the extended holiday period traders weren’t taking any chances that gas for Monday and Tuesday delivery would be as readily available as usual.

At Eastern points where weather was forecast to be warm and humid, they bid prices up by double digits in some cases. Strength along the East Coast was able to offset weakness in such spots as the Gulf, Great Lakes, Rockies and California. Overall, the market rose 11 cents.

Futures trading went into its typical pre-holiday weekend funk and prices were confined to less than a six-cent range. At the close, October had risen 2.1 cents to $4.065 and November was higher by 1.5 cents to $4.116.

Forecasters at AccuWeather.com were calling for warm, humid, load enhancing weather to emerge over the weekend into the next week. “After a brief cooldown late this week, very warm and humid air will bounce back during the Labor Day weekend,” said meteorologist Alex Sosnowski. “The pattern will be a boost for outdoor summer activities ranging from swimming to cookouts and ball games. [Tropical Storm] Cristobal will have moved well off into the North Atlantic by this weekend, which will allow seas and surf to diminish.

“High temperatures will flirt with the 90-degree mark from Washington, DC, to Philadelphia and New York City on Sunday and Labor Day. The warmth will be accompanied by a surge in humidity levels and an increasing risk of showers and thunderstorms. The combination of temperature, humidity, sunshine and other conditions will drive [heat index] temperatures well into the 90s to near 100 for several hours from the late morning into the afternoon. The bulk of the shower and thunderstorm activity will hold up from the Appalachians to the Midwest through the day Sunday. The best chance of a downpour reaching the I-95 corridor and the beaches is Sunday night and Monday.”

Looking further out, forecasters are not expecting much in the way of a cooldown during September. “While temperatures will fluctuate from one day to the next and will be dependent on the amount of shower and thunderstorm activity, chilly air will not be in a hurry to move in during September. “The pattern through the first half of September in the East will generally favor more days with above-average warmth, than days with below-average warmth,” said AccuWeather.com meteorologist Paul Pastelok.

Pastelok expects a push of chilly air to build southeastward from Canada around the third week of September. “Ahead of that push may be a surge of very warm air into the East during the second week of the month, [and] the pattern may guide some tropical systems that develop in the Atlantic toward the southern part of the United States, the Caribbean and Mexico.”