Unusually cold weather that remained in place over portions of the country into the last days of winter helped drive working natural gas in storage to an estimated 826 Bcf at the end of March, the lowest level in 11 years. But a rebuild of nearly 2,600 Bcf over the injection season is expected to push inventories up to 3,422 Bcf by the end of October, according to the Energy Information Administration (EIA). 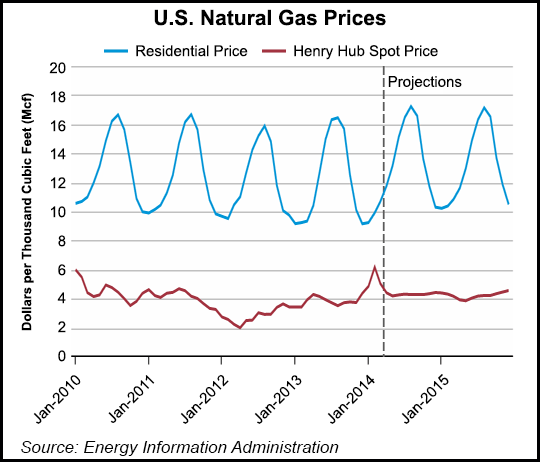 “Expectations for lower demand from the electric power sector compared with the past several years, as well as increasing production, should help enable a record-high stock build,” EIA said in its latest Short-Term Energy Outlook (STEO).

Natural gas spot prices at the Henry Hub averaged $4.90/MMBtu in March, down $1.10/MMBtu compared with February but 42 cents higher than EIA’s previous STEO forecast, in which the agency said it expected Henry Hub prices to average $4.48/MMBtu (see Shale Daily, March 11). The agency said it expects spot prices to continue to decline through the spring, and it forecast gas prices to average $4.44/MMBtu this year and $4.11/MMBtu in 2015.

Gas futures prices for July 2014 delivery (for the five-day period ending April 3) averaged $4.46/MMBtu. Current options and futures prices imply that market participants place the lower and upper bounds for the 95% confidence interval for July 2014 contracts at $3.40/MMBtu and $5.87/MMBtu, respectively. At this time one year ago, the gas futures contract for July 2013 averaged $4.07/MMBtu and the corresponding lower and upper limits of the 95% confidence interval were $3.16/MMBtu and $5.23/MMBtu, EIA said.

“Rapid natural gas production growth in the Marcellus formation is contributing to falling natural gas forward prices in the Northeast, which often fall even with or below Henry Hub prices outside of peak winter demand months,” the agency said. “Consequently, some drilling activity may move away from the Marcellus back to Gulf Coast plays such as the Haynesville and Barnett, where prices are closer to the Henry Hub spot price.”

Growing domestic production over the past several years has displaced some pipeline imports from Canada, and exports to Mexico have increased over the same period, trends EIA expects will continue through 2015. EIA projects net imports of 3.7 Bcf/d this year and 3.0 Bcf/d next year, which would be the lowest level since 1987. Over the longer term, EIA projects that the United States will be a net exporter of natural gas beginning in 2018.