Reliability and peak demand in New England could be compromised without a more robust natural gas market and infrastructure build out in the region, according to officials from the gas and power sectors. 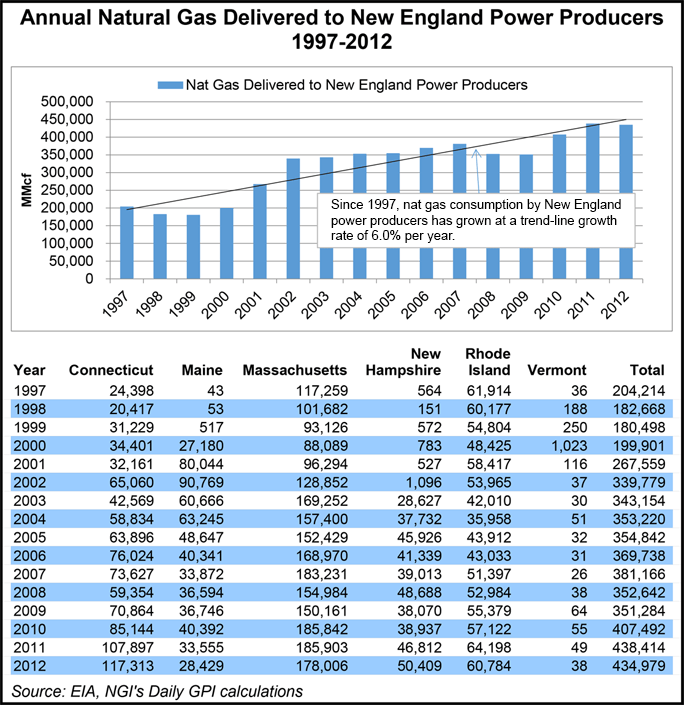 There is general agreement that more gas is needed in the region, although what to do to facilitate that is not widely agreed upon, according to three panelists representing the grid operator, independent power producers and the Interstate Natural Gas Association of America (INGAA) at a webinar hosted Wednesday by Restructuring Today.

A Black & Veatch study done for the New England States Committee on Electricity (NESCO) was quoted by one of the panelists as concluding that without new “infrastructure or other solutions to increase supply or reduce demand, New England will experience significant natural gas infrastructure constraints that could dramatically increase wholesale gas and electricity prices throughout the region and potentially threaten reliability [of the regional grid].”

Since 1997, natural gas consumption by New England power producers has grown at a trend-line growth rate of 6.0% per year.

New England currently depends on gas for 52% of its power supplies, according to Kevin Kirby, vice president for market operations at the New England Independent System Operator (ISO). Kirby said the regional grid operator is working closely with various gas pipelines serving the region to develop closer coordination in the dispatching of gas and electricity supplies.

“Gas supply is not the problem,” said INGAA CEO Donald Santa, noting that the rapid Marcellus Shale growth has quickly begun to displace gas supplies from the Southeast and are “on the doorstep” of New England. While supplies from the south have been cut from 12 Bcf/d down to 6 Bcf/d, Marcellus production has shot up from 2 Bcf/d a few years ago to 11 Bcf/d today, he said.

“Natural gas is really the dominant [energy] issue in New England,” said Dan Dolan, president of the New England Power Generators Association. While there are still large capacities of coal and oil-fired generation capability, the actual fuel relied on most has “skewed toward natural gas,” Dolan said. “Natural gas right now overhangs everything.

“Gas is the dominant fuel for actual generation and the megawatt-hours produced,” said Dolan, stressing that having the Marcellus come into play so nearby is a tremendous asset for New England. “It brings those supplies a whole lot closer, but they are still not here. Based on its geology, New England simply doesn’t have that type of opportunity [to develop its own shale or storage].”

New England’s gas issue is focused on transportation, and with LNG imports drying up the region must look to the network of west-to-east pipelines for added capacity to bring in more gas.

Dolan said the region is expecting a major proposal “very soon” from Kinder Morgan Pipeline to bring in a new pipe. As Santa and he point out, however, there is a disconnect between the electric grid’s real need for new capacity and the market’s willingness to lock up big chunks of gas pipeline capacity beyond three- to five-year periods. Gas infrastructure investors generally want long-term commitments starting at 20-year deals, Dolan said.

Santa used the example of Spectra Pipeline’s different experiences in New England compared to Florida regarding proposals for new gas pipelines. In both areas, Spectra originally proposed 1 Bcf/d capacity pipelines, but only the one in Florida — Sabal Trail Transmission — is moving forward (see Daily GPI, July 29;July 8; May 7).

In New England, the Algonquin Interstate Market (AIM) project, if approved as planned by Spectra, would carry gas through Connecticut, Massachusetts and New York through an expanded Algonquin Gas Transmission system to Texas Eastern and Maritimes & Northeast pipelines.

Originally conceived for 1 Bcf/d capacity, then cut to 500 MMcf/d, there was only 340 MMcf/d subscribed after two open seasons, said Santa, noting that all of the buyers were local gas distribution companies, meaning there no power generators or marketers signed up.

“There is a real contrast here in terms of the degree to which the structures in the market support adding pipeline capacity that is needed,” he said. “The model will only work when there is someone willing to stand on the other side of the contract and take some risk.”