With the country’s natural gas storage network refilling faster than expected and analysts calling for a mild summer to further tamp down demand for the resource from the power generation sector, Northeast natural gas prices in the forward market have been making their way lower in recent weeks. 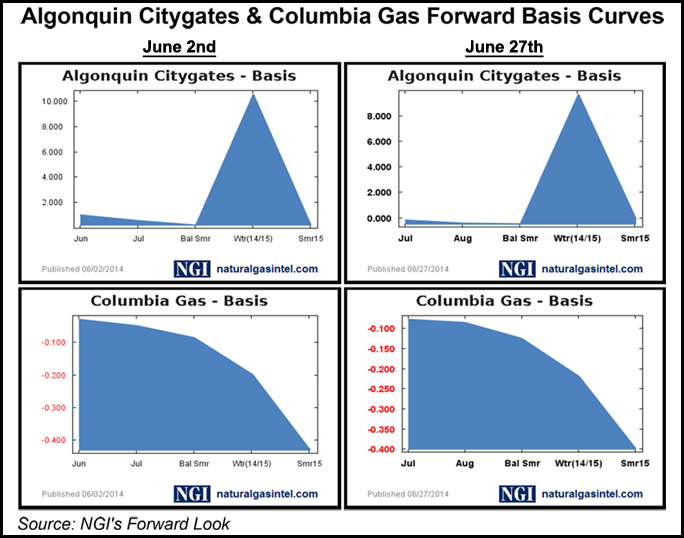 Coming off of Thursday’s 110 Bcf injection storage report for the week ending June 20, the natural gas market has now endured seven consecutive triple-digit builds, with most of them coming in higher than expected. After being slashed to a low of 822 Bcf of working gas in underground storage at the end of March following the brutal 2013-2014 winter heating season, market watchers — who were wary at the start of injection season — are beginning to show some optimism that the caverns may be refilled in time for the 2014-2015 winter heating period.

Teri Viswanath, who directs natural gas commodity strategy for BNP Paribas, said Friday morning that an abundance of bearish fundamentals is currently weighing down prices, despite the fact that near-term temperature outlooks appear warmer, which should increase the week-on-week demand for electric power.

Amid the glut of gas, Northeast points have been plunging to new depths. NGI‘s Forward Look Transco Zn 6 NY July price, which started the month at an already strong basis of -$0.729 to the Henry Hub at the close of trading on June 2, has steadily tanked to where it now sits at -$1.02 at the close on June 26.

According to NGI’s Forward Look published June 27, Algonquin Citygates were priced at -$0.197 below the Henry Hub, down more than 63 cents from what was a positive 44-cent basis on June 2. Looking further out the curve, the price softness was also felt in the winter strip where, according to NGI, Algonquin basis prices for the Nov-March strip fell about 79 cents to $9.652 as of Thursday’s trading. The Algonquin summer 2015 basis strip fared little better, dropping from $0.124 above the Henry Hub on June 2 to -$0.091 on June 26.

“The Dominion prompt forward basis price has fallen to -$1.505 from -$1.115 on June 2, however Columbia Gas TCO has only dropped about a penny and a half since that date, remaining relatively steady compared to its peer,” according to NGI’s Nathan Harrison, a markets analyst. “A similar scenario has played out in TCO’s winter basis strip which dipped slightly from -$.195 to -$0.22 showing the point as altogether unmoved by the wave of stronger production and storage figures.”

Closer to the Gulf and into the Midwest, where Marcellus production has had little impact, some slight gains occurred in prompt basis with points like Southern Natural picking up a couple cents, Transco Zone 3 and Columbia Gulf Onshore adding a penny, and Houston Ship Channel tacking on a little over half a cent.

“Across all of the Forward Look points, the trend for the July basis over the month of June was one of decline with volatility tapering slightly toward the end of the month,” Harrison added. “Overall, points are generally sitting lower than the Hub due to the swell of natural gas out of the Marcellus Shale, which shackled prices across the Northeast.”